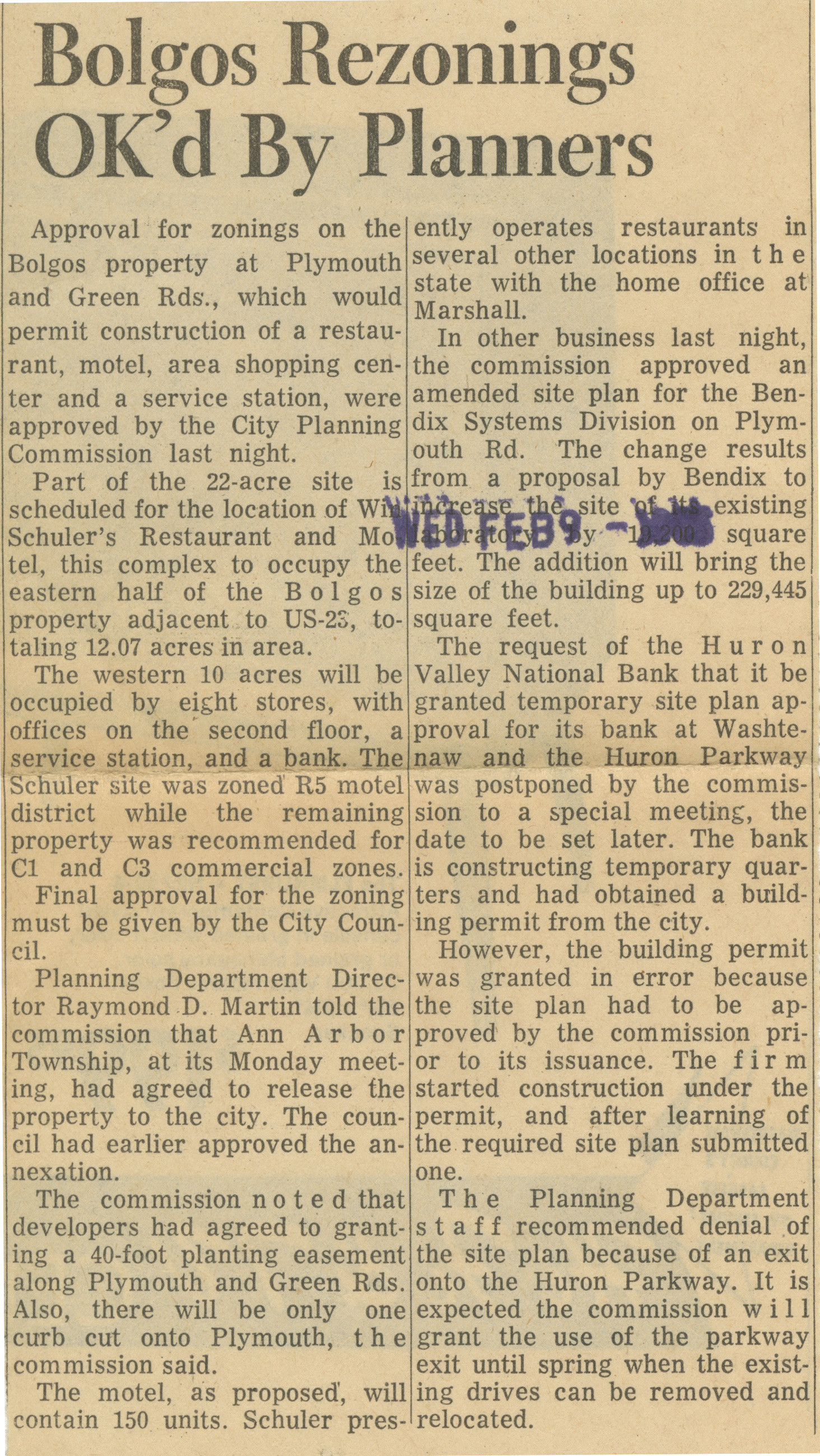 Approval for zonings on the Bolgos property at Plymouth and Green Rds., which would permit construction of a restaurant, motel, area shopping center and a service station, were approved by the City Planning Commission last night.

Part of the 22-acre site is scheduled for the location of Win Schuler’s Restaurant and Motel, this complex to occupy the eastern half of the Bolgos property adjacent to US-2S, totaling 12.07 acres in area.

The western 10 acres will be occupied by eight stores, with offices on the second floor, a service station, and a bank. The Schuler site was zoned R5 motel district while the remaining property was recommended for C1 and C3 commercial zones.

Final approval for the zoning must be given by the City Council.

Planning Department Director Raymond D. Martin told the commission that Ann Arbor Township, at its Monday meeting, had agreed to release the property to the city. The council had earlier approved the annexation.

The commission noted that developers had agreed to granting a 40-foot planting easement along Plymouth and Green Rds. Also, there will be only one curb cut onto Plymouth, the commission said.

The motel, as proposed, will contain 150 units. Schuler presently operates restaurants in several other locations in the state with the home office at Marshall.

In other business last night, the commission approved an amended site plan for the Bendix Systems Division on Plymouth Rd. The change results from a proposal by Bendix to increase the site of its existing laboratories by 19,200 square feet. The addition will bring the of the building up to 229,445 square feet.

The request of the Huron Valley National Bank that it be granted temporary site plan approval for its bank at Washtenaw and the Huron Parkway was postponed by the commission to a special meeting, the date to be set later. The bank is constructing temporary quarters and had obtained a building permit from the city.

However, the building permit was granted in error because the site plan had to be approved by the commission prior to its issuance. The firm started construction under the permit, and after learning of the required site plan submitted one.

The Planning Department staff recommended denial of the site plan because of an exit onto the Huron Parkway. It is expected the commission will grant the use of the parkway exit until spring when the existing drives can be removed and relocated.