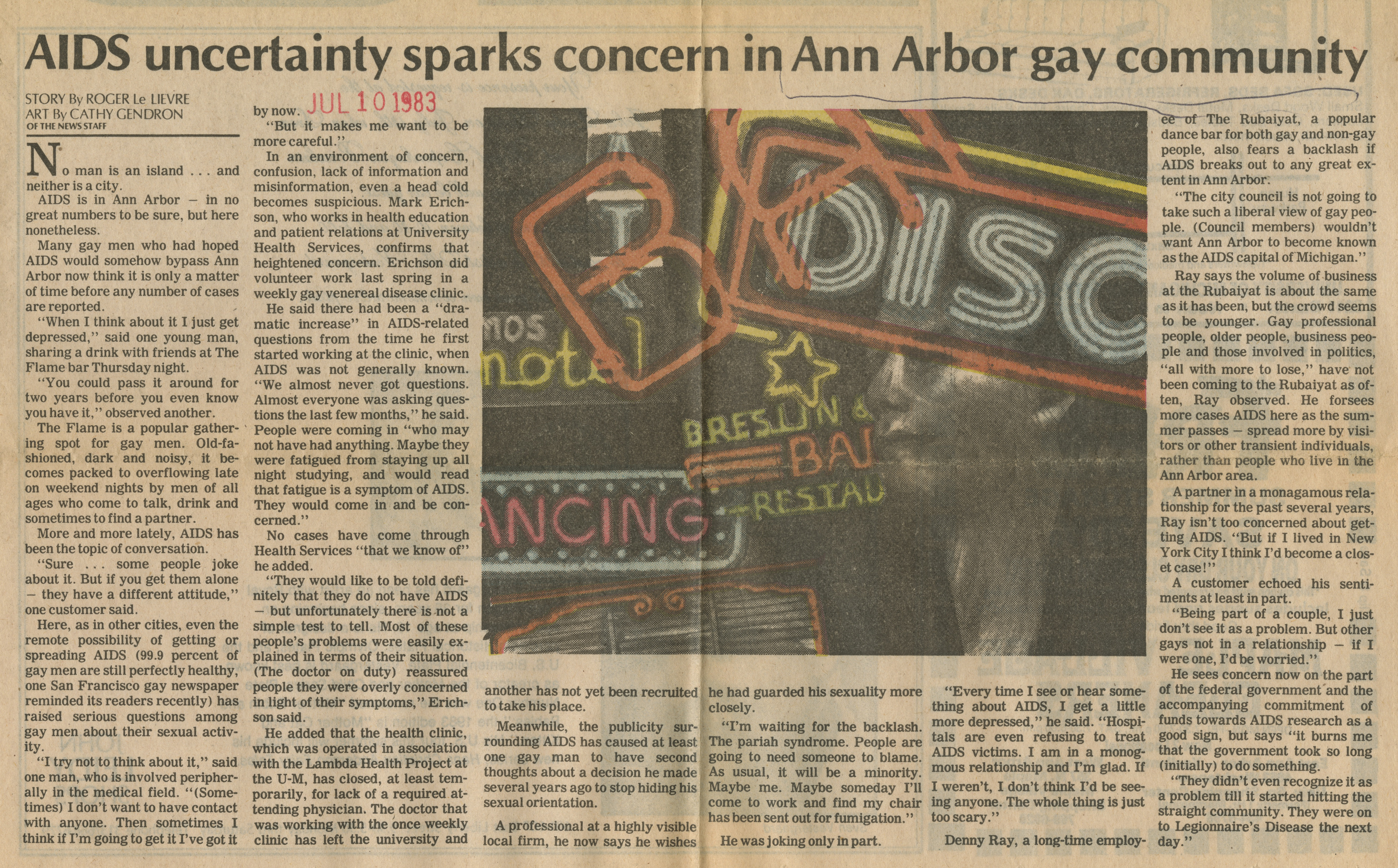 AIDS is in Ann Arbor - in no great numbers to be sure, but here nonetheless.

Many gay men who had hoped AIDS would somehow bypass Ann Arbor now think it is only a matter of time before any number of cases are reported.

“When I think about it I just get depressed,” said one young man, sharing a drink with friends at The Flame bar Thursday night.

“You could pass it around for two years before you even know you have it,” observed another.

The Flame is a popular gathering spot for gay men. Old-fashioned, dark and noisy, it becomes packed to overflowing late on weekend nights by men of all ages who come to talk, drink and sometimes to find a partner.

More and more lately, AIDS has been the topic of conversation.

“Sure .. . some people joke about it. But if you get them alone - they have a different attitude,” one customer said.

Here, as in other cities, even the remote possibility of getting or spreading AIDS (99.9 percent of gay men are still perfectly healthy, one San Francisco gay newspaper reminded its readers recently) has raised serious questions among gay men about their sexual activity.

“I try not to think about it,” said one man, who is involved peripherally in the medical field. “(Sometimes) I don’t want to have contact with anyone. Then sometimes I think if I’m going to get it I’ve got it by now.

“But it makes me want to be more careful.”

In an environment of concern, confusion, lack of information and misinformation, even a head cold becomes suspicious. Mark Erichson, who works in health education and patient relations at University Health Services, confirms that heightened concern. Erichson did volunteer work last spring in a weekly gay venereal disease clinic.

He said there had been a “dramatic increase” in AIDS-related questions from the time he first started working at the clinic, when AIDS was not generally known. “We almost never got questions. Almost everyone was asking questions the last few months,” he said. People were coming in “who may not have had anything. Maybe they were fatigued from staying up all night studying, and would read that fatigue is a symptom of AIDS. They would come in and be concerned.”

No cases have come through Health Services “that we know of” he added.

“They would like to be told definitely that they do not have AIDS — but unfortunately there' is not a simple test to tell. Most of these people’s problems were easily explained in terms of their situation. (The doctor on duty) reassured people they were overly concerned in light of their symptoms,” Erichson said.

He added that the health clinic, which was operated in association with the Lambda Health Project at the U-M, has closed, at least temporarily, for lack of a required attending physician. The doctor that was working with the once weekly clinic has left the university and another has not yet been recruited to take his place.

Meanwhile, the publicity surrounding AIDS has caused at least one gay man to have second thoughts about a decision he made several years ago to stop hiding his sexual orientation.

A professional at a highly visible local firm, he now says he wishes he had guarded his sexuality more closely.

“I’m waiting for the backlash. The pariah syndrome. People are going to need someone to blame. As usual, it will be a minority. Maybe me. Maybe someday I’ll come to work and find my chair has been sent out for fumigation.” He was joking only in part.

“Every time I see or hear something about AIDS, I get a little more depressed,” he said. “Hospitals are even refusing to treat AIDS victims. I am in a monogmous relationship and I’m glad. If I weren’t, I don’t think I’d be seeing anyone. The whole thing is just too scary.”

Denny Ray, a long-time employee at The Rubaiyat, a popular dance bar for both gay and non-gay people, also fears a backlash if AIDS breaks out to any great extent in Ann Arbor.

“The city council is not going to take such a liberal view of gay people. (Council members) wouldn’t want Ann Arbor to become known as the AIDS capital of Michigan.”

Ray says the volume of business at the Rubaiyat is about the same as it has been, but the crowd seems to be younger. Gay professional people, older people, business people and those involved in politics, “all with more to lose,” have not been coming to the Rubaiyat as often, Ray observed. He forsees more cases AIDS here as the summer passes - spread more by visitors or other transient individuals, rather than people who live in the Ann Arbor area.

A partner in a monagamous relationship for the past several years, Ray isn’t too concerned about getting AIDS. “But if I lived in New York City I think I’d become a closet case!”

A customer echoed his sentiments at least in part.

“Being part of a couple, I just don’t see it as a problem. But other gays not in a relationship - if I were one, I’d be worried.”

He sees concern now on the part of the federal government and the accompanying commitment of funds towards AIDS research as a good sign, but says “it burns me that the government took so long (initially) to do something.

“They didn’t even recognize it as a problem till it started hitting the straight community. They were on to Legionnaire’s Disease the next day.”