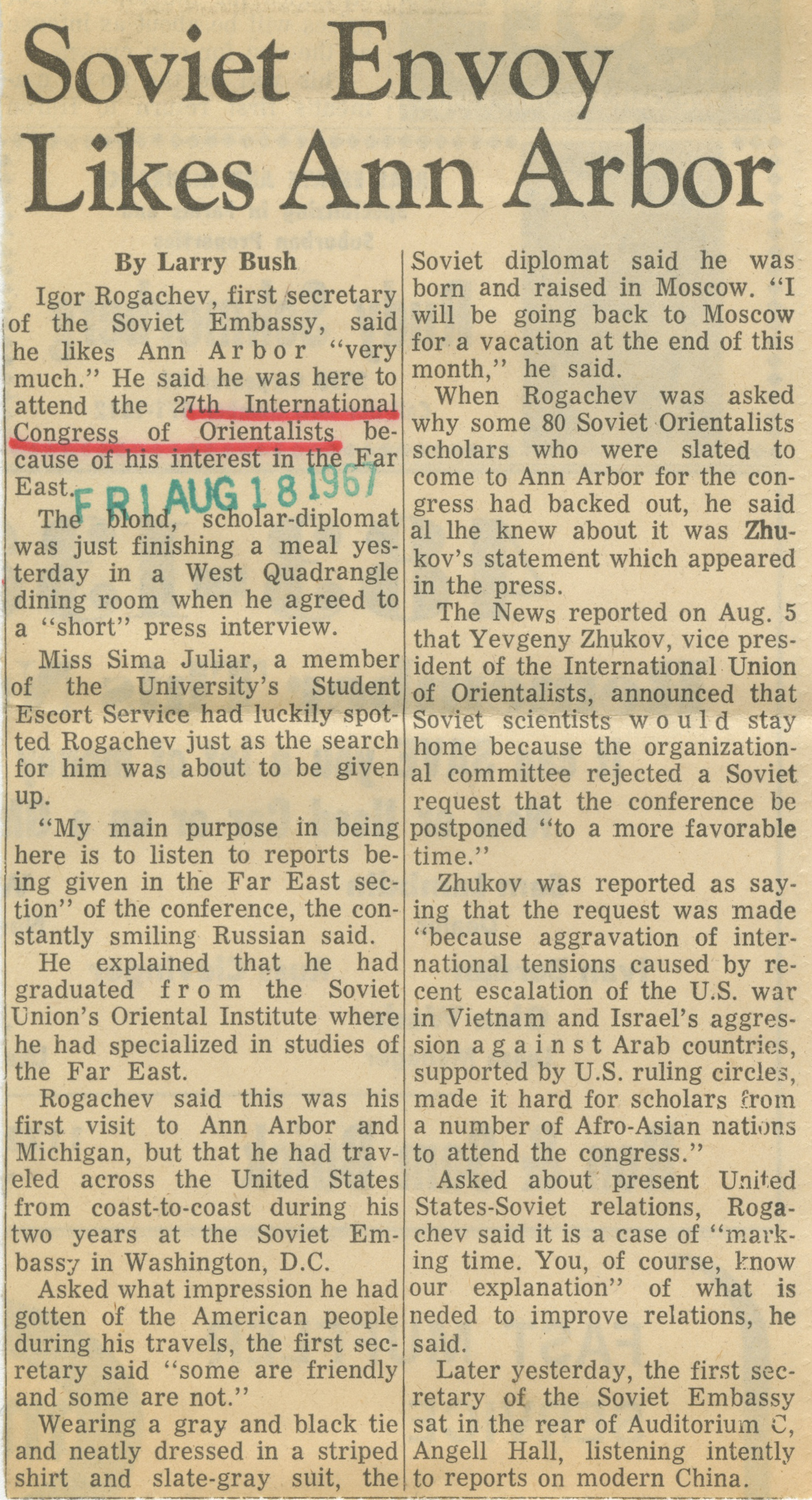 By Larry Bush
Igor Rogachev, first secretary of the Soviet Embassy, said he likes Ann Arbor “very much.” He said he was here to attend the 27th International Congress of Orientalists because of his interest in the Far East.
The blond, scholar-diplomat was just finishing a meal yesterday in a West Quadrangle dining room when he agreed to a "short” press interview.
Miss Sima Juliar, a member of the University's Student Escort Service had luckily spotted Rogachev just as the search for him was about to be given
up.
He sted fral Institust
“My main purpose in being here is to listen to reports being given in the Far East section" of the conference, the constantly smiling Russian said.
He explained that he had graduated from the Soviet Union's Oriental Institute where he had specialized in studies of the Far East.
Rogachev said this was his first visit to Ann Arbor and Michigan, but that he had traveled across the United States from coast-to-coast during his two years at the Soviet Embassy in Washington, D.C.
Asked what impression he had gotten of the American people during his travels, the first secretary said "some are friendly and some are not.”
Wearing a gray and black tie and neatly dressed in a striped shirt and slate-gray suit, the Soviet diplomat said he was born and raised in Moscow. "I will be going back to Moscow for a vacation at the end of this month," he said.
When Rogachev was asked why some 80 Soviet Orientalists scholars who were slated to come to Ann Arbor for the congress had backed out, he said al lhe knew about it was Zhukov's statement which appeared in the press.
The News reported on Aug. 5 that Yevgeny Zhukov, vice president of the International Union of Orientalists, announced that Soviet scientists would stay home because the organizational committee rejected a Soviet request that the conference be postponed “to a more favorable time.”
Zhukov was reported as saying that the request was made “because aggravation of international tensions caused by recent escalation of the U.S. war in Vietnam and Israel's aggression against Arab countries, supported by U.S. ruling circles, made it hard for scholars crom a number of Afro-Asian nations to attend the congress.”
Asked about present United States-Soviet relations, Rogachey said it is a case of "marking time. You, of course, know our explanation" of what is needed to improve relations, he said.
Later yesterday, the first secretary of the Soviet Embassy sat in the rear of Auditorium C, Angell Hall, listening intently to reports on modern China.