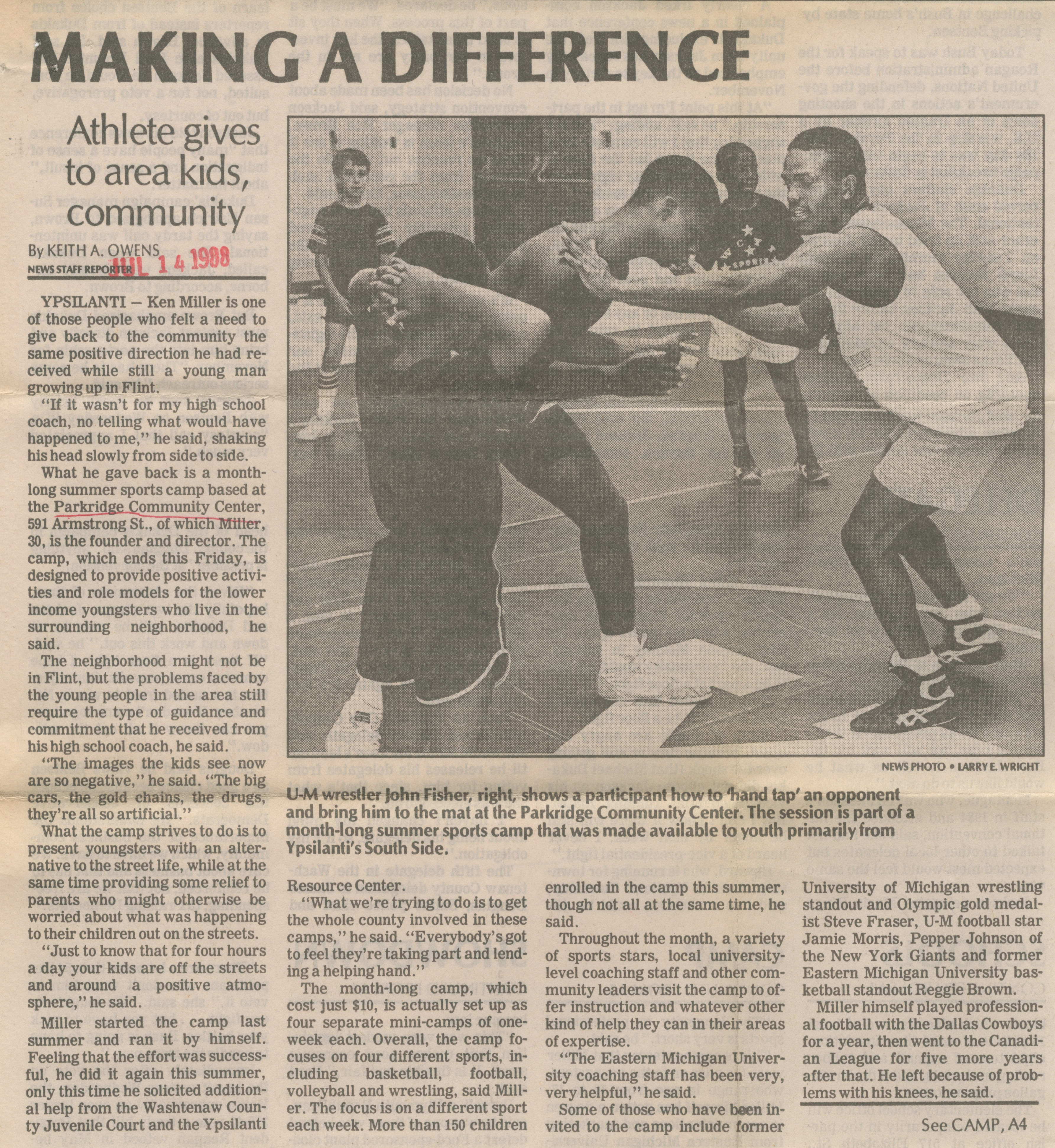 YPSILANTI -- Ken Miller is one of those people who felt a need to give back to the community the same positive direction he had received while still a young man growing up in Flint.

"If it wasn't for my high school coach, no telling what would have happened to me," he said, shaking his head slowly from side to side.

What he gave back is a month-long summer sports camp based at the Parkridge Community Center, 591 Armstrong St., of which Miller, 30, is the founder and director. The camp, which ends this Friday, is designed to provide positive activities and role models for the lower income youngsters who live in the surrounding neighborhood, he said.

The neighborhood might not be in Flint, but the problems faced by the young people in the area still require the type of guidance and commitment that he received from his high school coach, he said.

"The images the kids see now are so negative," he said, "The big cars, the gold chains, the drugs, they're all so artificial."

What the camp strives to do is to present youngsters with an alternative tot he street life, while at the same time providing some relief to parents who might otherwise be worried about what was happening to their children out on the streets.

"Just to know that for four hours a day your kids are off the streets and around a positive atmosphere," he said.

Miller started the camp last summer and ran it by himself. Feeling that the effort was successful, he did it again this summer, only this time he solicited additional help from Washtenaw County Juvenile Court and the Ypsilanti Resource Center.

"What we're trying to do is to get the whole county involved in these camps," he said. "Everybody's got to feel they're taking part and lending a helping hand."

The month-long camp, which cost just $10, is actually set up as four separate mini-camps of one-week each. Overall, the camp focuses on different sports, including basketball, football, volleyball and wrestling, said Miller. The focus is on a different sport each week. More than 150 children enrolled in the camp this summer, though not all at the same time, he said.

Throughout the month, a variety of sports stars, local university-level coaching staff and other community leaders visit the camp to offer instruction and whatever other kind of help they can in their areas of expertise.

"The Eastern Michigan University coaching staff has been very, very helpful," he said.

Miller himself played professional football with the Dallas Cowboys for a year, then went to the Canadian League for five more years after that. He left because of problems with his knees, he said.

"The longevity in professional sports is very short," he said.

This is another lesson that Miller wants to pass on to youngsters, who range in age from 10 to 17. Miller himself has gotten a degree in communications and marketing from Eastern Michigan University, and he knows how important it is for young people to get an education no matter what sport they may want to pursue professionally. He also stresses that professional sports is not the only way in the world for lower income children to succeed.

"Everybody can't be a professional athlete," he said.

Because of this, Miller said that he hopes to further expand the camp to include not only sports but a work study program, a tutorial program and "somewhat of a drug program."

He also calls on other community leaders who are not sports figures to interact with the youngsters, such as Ypsilanti Housing Commission Director Leonard Bryant, County Commissioner Ronnie Peterson and Assistant County Department Head Karen Lawrence.

"We try to mix it up," he said. But the bottom line is helping Ypsilanti's South Side youth.

"I get a thrill out of working with the kids. There's nothing more positive than feeling you've made a difference in a kid's life," he said.

U-M wrestler John Fisher, right, shows a participant how to 'hand tap' an opponent and bring him to the mat at the Parkridge Community Center. The session is part of a month-long summer sports camp that was made available to youth primarily from Ypsilanti's South Side.