Two Women On Welfare Give Thanks Thursday, Too 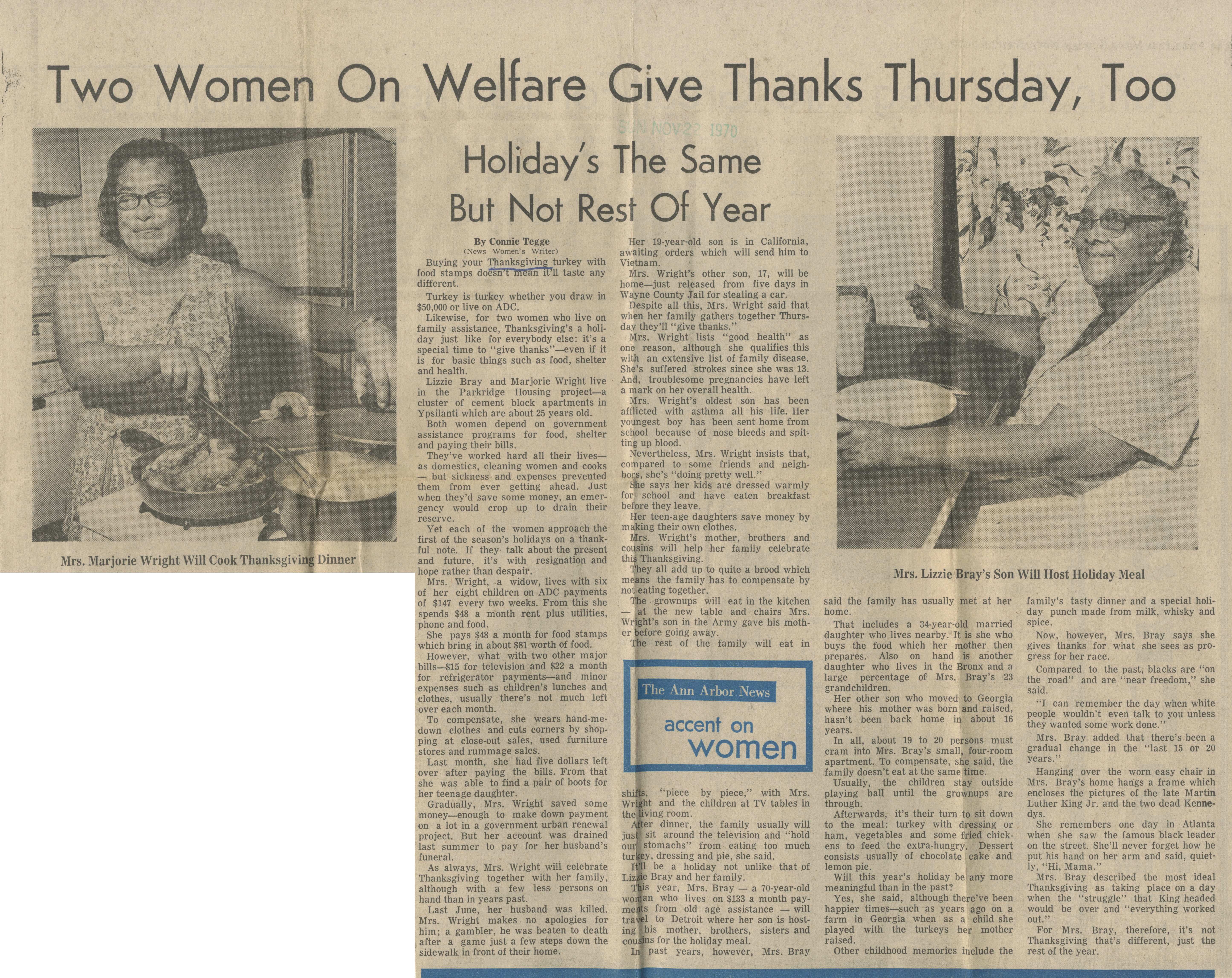 ﻿Two Women On Welfare Give Thanks Thursday, Too

Holiday's The Same But Not Rest Of Year

Likewise, for two women who live on family assistance, Thanksgiving’s a holiday just like for everybody else: it's a special time to “give thanks”—even if it is for basic things such as food, shelter and health.

Lizzie Bray and Marjorie Wright live in the Parkridge Housing project—a cluster of cement block apartments in Ypsilanti which are about 25 years old.

Both women depend on government assistance programs for food, shelter and paying their bills.

They’ve worked hard all their lives— as domestics, cleaning women and cooks — but sickness and expenses prevented them from ever getting ahead. Just when they’d save some money, an emergency would crop up to drain their reserve.

Yet each of the women approach the first of the season’s holidays on a thankful note. If they talk about the present and future, it’s with resignation and hope rather than despair.

Mrs. Wright, a widow, lives with six of her eight children on ADC payments of $147 every two weeks. From this she spends $48 a month rent plus utilities, phone and food.

She pays $48 a month for food stamps which bring in about $81 worth of food.

However, what with two other major bills—$15 for television and $22 a month for refrigerator payments—and minor expenses such as children’s lunches and clothes, usually there's not much left over each month.

To compensate, she wears hand-me-down clothes and cuts corners by shopping at close-out sales, used furniture stores and rummage sales.

Last month, she had five dollars left over after paying the bills. From that she was able to find a pair of boots for her teenage daughter.

Gradually, Mrs. Wright saved some money—enough to make down payment on a lot in a government urban renewal project. But her account was drained last summer to pay for her husband's funeral.

As always, Mrs. Wright will celebrate Thanksgiving together with her family, although with a few less persons on hand than in years past.

Last June, her husband was killed. Mrs. Wright makes no apologies for him; a gambler, he was beaten to death after a game just a few steps down the sidewalk in front of their home.

Her 19-year-old son is in California, awaiting orders which will send him to Vietnam.

Mrs. Wright’s other son, 17, will be home—just released from five days in Wayne County Jail for stealing a car.

Despite all this, Mrs. Wright said that when her family gathers together Thursday they’ll “give thanks.”

Mrs. Wright lists “good health” as one reason, although she qualifies this with an extensive list of family disease. She's suffered strokes since she was 13. And, troublesome pregnancies have left a mark on her overall health.

Mrs. Wright’s oldest son has been afflicted with asthma all his life. Her youngest boy has been sent home from school because of nose bleeds and spitting up blood.

She says her kids are dressed warmly for school and have eaten breakfast before they leave.

Her teen-age daughters save money by making their own clothes.

Mrs. Wright’s mother, brothers and cousins will help her family celebrate this Thanksgiving.

They all add up to quite a brood which means the family has to compensate by not eating together.

The grownups will eat in the kitchen — at the new table and chairs Mrs. Wright's son in the Army gave his mother before going away.

The rest of the family will eat in shifts, “piece by piece,” with Mrs. Wright and the children at TV tables in the living room.

After dinner, the family usually will sit around the television and “hold stomachs” from eating too much turkey, dressing and pie, she said.

It'll be a holiday not unlike that of Lizzie Bray and her family.

This year, Mrs. Bray — a 70-year-old woman who lives on $133 a month payments from old age assistance — will travel to Detroit where her son is hosting his mother, brothers, sisters and cousins for the holiday meal.

In past years, however, Mrs. Bray said the family has usually met at her home.

That includes a 34-year-old married daughter who lives nearby. It is she who buys the food which her mother then prepares. Also on hand is another daughter who lives in the Bronx and a large percentage of Mrs. Bray’s 23 grandchildren.

Her other son who moved to Georgia where his mother was born and raised, hasn’t been back home in about 16 years.

In all, about 19 to 20 persons must cram into Mrs. Bray’s small, four-room apartment. To compensate, she said, the family doesn’t eat at the same time.

Usually, the children stay outside playing ball until the grownups are through.

Afterwards, it’s their turn to sit down to the meal: turkey with dressing or ham, vegetables and some fried chickens to feed the extra-hungry. Dessert consists usually of chocolate cake and lemon pie.

Will this year’s holiday be any more meaningful than in the past?

Yes, she said, although there’ve been happier times—such as years ago on a farm in Georgia when as a child she played with the turkeys her mother raised.

Other childhood memories include the family’s tasty dinner and a special holiday punch made from milk, whisky and spice.

Now, however, Mrs. Bray says she gives thanks for what she sees as progress for her race.

Compared to the past, blacks are “on the road” and are “near freedom,” she said.

“I can remember the day when white people wouldn’t even talk to you unless they wanted some work done.”

Mrs. Bray added that there’s been a gradual change in the “last 15 or 20 years.”

Hanging over the worn easy chair in Mrs. Bray’s home hangs a frame which encloses the pictures of the late Martin Luther King Jr. and the two dead Kennedys.

She remembers one day in Atlanta when she saw the famous black leader on the street. She’ll never forget how he put his hand on her arm and said, quietly, “Hi, Mama.”

Mrs. Bray described the most ideal Thanksgiving as taking place on a day when the “struggle” that King headed would be over and “everything worked out.”

For Mrs. Bray, therefore, it’s not Thanksgiving that’s different, just the rest of the year.