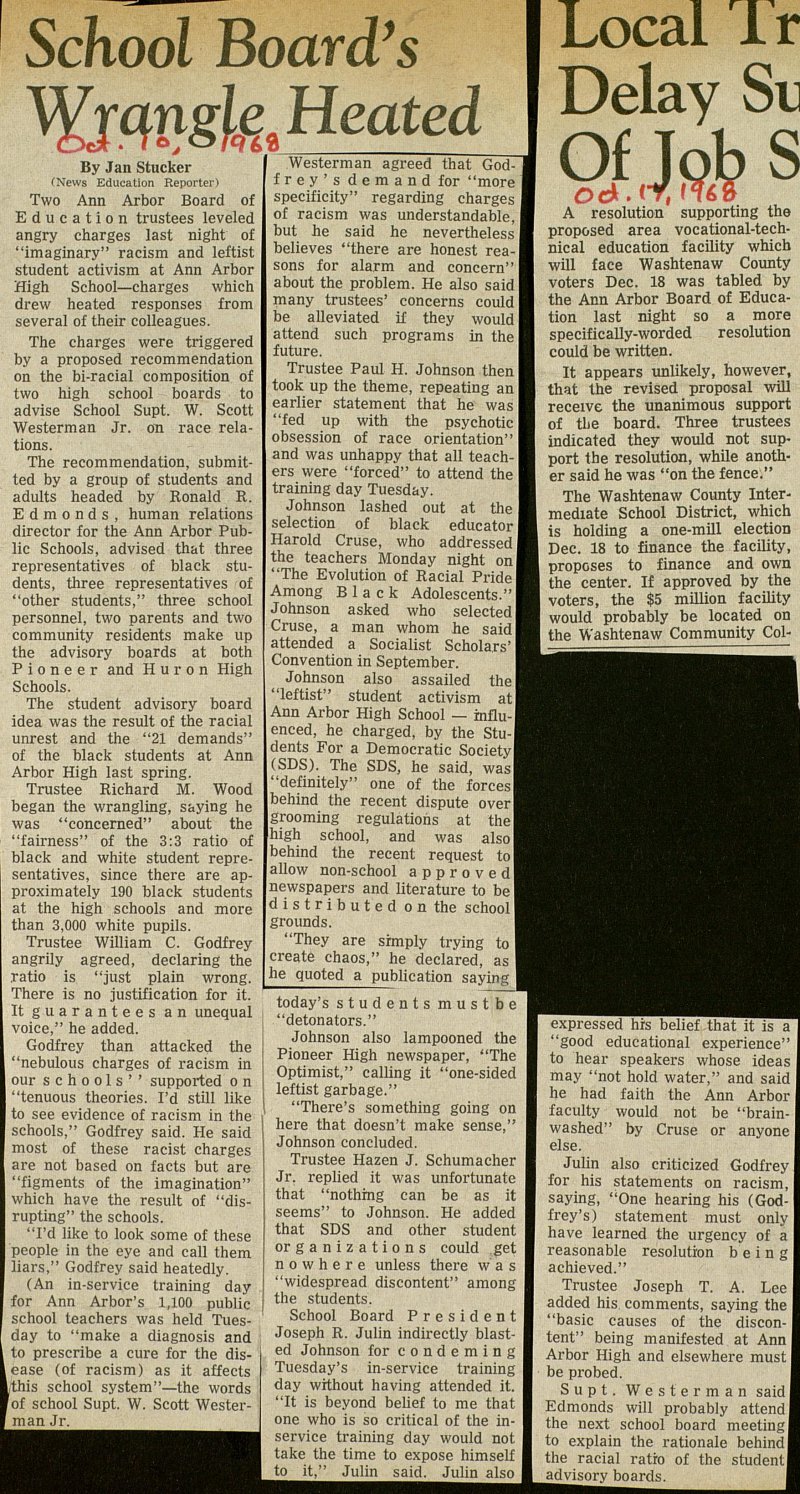 Two Ann Arbor Board of Education trustees leveled angry charges last night of "imaginary" racism and leftist student activism at Ann Arbor High School- charges which drew heated responses from several of their colleagues. The charges were triggered by a proposed recommendation on the bi-racial composition of two high school boards to advise School Supt. W. Scott Westerman Jr. on race relations. The recommendation, submitted by a group of students and adults headed by Ronald R. E d m o n d s , human relations director for the Ann Arbor Public Schools, advised that three representatives of black students, three representatives of "other students," three school personnel, two parents and two community residents make up the advisory boards at both Pioneer and H u r o n High Schools. The student advisory board idea was the result of the racial unrest and the "21 demands" of the black students at Ann Arbor High last spring. Trustee Richard M. Wood began the wrangling, saying he was "concerned" about the "fairness" of the 3:3 ratio of black and white student representatives, since there are approximately 190 black students at the high schools and more than 3,000 white pupils. Trustee William C. Godfrey angrily agreed, declaring the ratio is "just plain wrong. There is no justification for it. It guarantees an unequal voice," he added. Godfrey than attacked the "nebulous charges of racism ia our schools'' supported o n "tenuous theories. I'd still like to see evidence of racism in the schools," Godfrey said. He said most of these racist charges are not based on facts but are "figments of the imagination" which have the result of "disrupting" the schools. "I'd like to look some of these people in the eye and cali them liars," Godfrey said heatedly. (An in-service training day for Ann Arbor's 1,100 public school teachers was held Tuesday to "make a diagnosis and to prescribe a cure for the disease (of racism) as it affects ithis school system"- the words of school Supt. W. Scott Westerman Jr. Westerman agreed that Godfrey's demand for "more specificity" regarding charges of racism was understandable, but he said he nevertheless believes "there are honest reasons for alarm and concern" about the problem. He also said many trustees' concerns could be alleviated if they would attend such programs in the future. Trustee Paul H. Johnson then took up the theme, repeating an earlier statement that he was "fed up with the psychotic obsession of race orientation" and was unhappy that all teachers were "forced" to attend the training day Tuesday. Johnson lashed out at the selection of black educator Harold Cruse, who addressed the teachers Monday night on "The Evolution of Racial Pride Among Black Adolescents." Johnson asked who selected Cruse, a man whom he said attended a Socialist Schola.rs' Convention in SeDtemher Johnson also assailed the "leftist" student activism at Ann Arbor High School - influenced, he charged, by the Students For a Democratie Societyl (SDS). The SDS, he said, was "definitely" one of the forces behind the reeent dispute over grooming regulatioñs at the high school, and was also behind the recent request to allow non-school approved newspapers and literature to be distributedonthe school grounds. "They are srmply trying to creatê chaos," he declared, as he quoted a publication saying today's students must be "detonators." Johnson also lampooned the Pioneer High newspaper, "The Optimist," calling it "one-sided leftist garbage." "There's something going on here that doesn't make sense," Johnson concluded. Trustee Hazen J. Schumacher Jr. replied it was unfortunate that "nothing can be as it seems" to Johnson. He added that SDS and other student organizations could get n o w h e r e unless there was "widespread discontent" among the students. School Board President Joseph R. Julin indirectly blasted Johnson for condeming Tuesday's in-service training day without having attended it. "It is beyond belief to me that one who is so critical of the inservice training day would not take the time to exposé himself to it," Julin said. Julin also expressed hrs belief that it is a "good educational experience" to hear speakers whose ideas may "not hold water," and said he had faith the Ann Arbor faculty would not be "brainwashed" by Cruse or anyone else. Julin also criticized Godfrey for his statements on racism, saying, "One hearing his (Godfrey's) statement must only have learned the urgency of a reasonable resolutron b e i n g achieved." Trustee Joseph T. A. Lee added his comments, saying the "basic causes of the discontent" being manifested at Ann Arbor High and elsewhere must be probed. Supt. Westerman said I Edmonds will probably attend the next school board meeting to explain the rationale behind the racial ratio of the student! advisory boards. I