Caboose To Roll To Saline Musuem 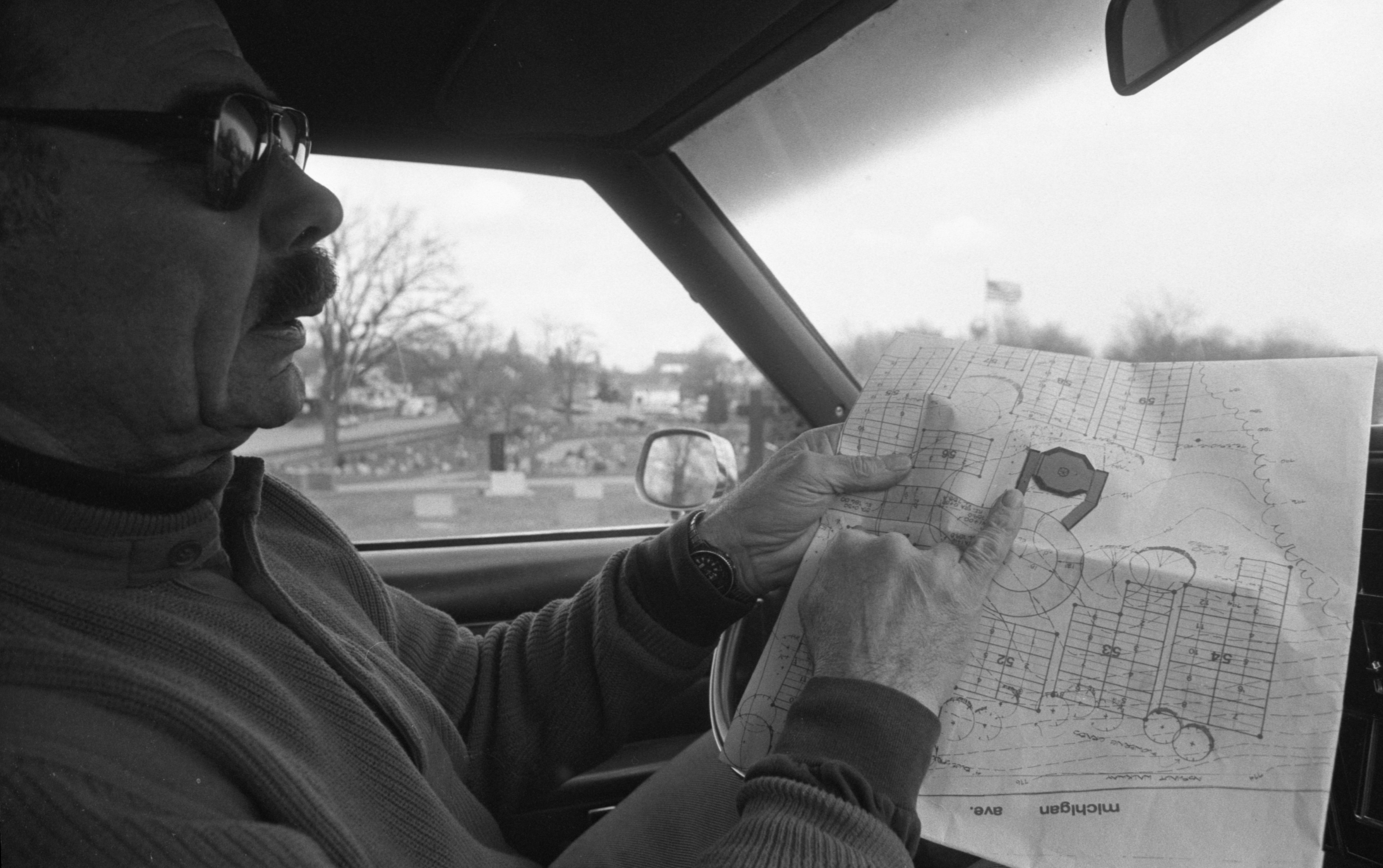 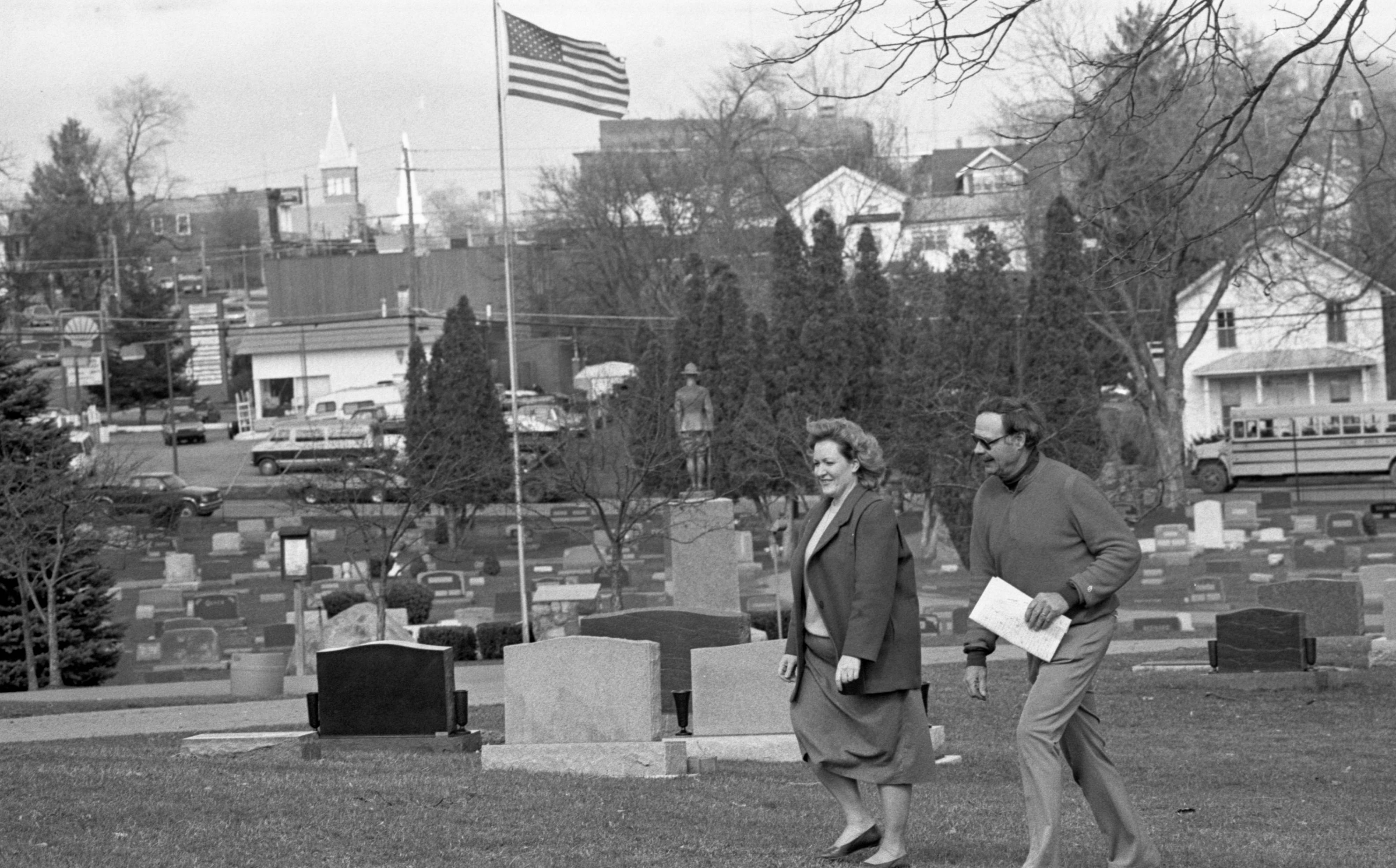 Grave question: What constitutes a cemetery? 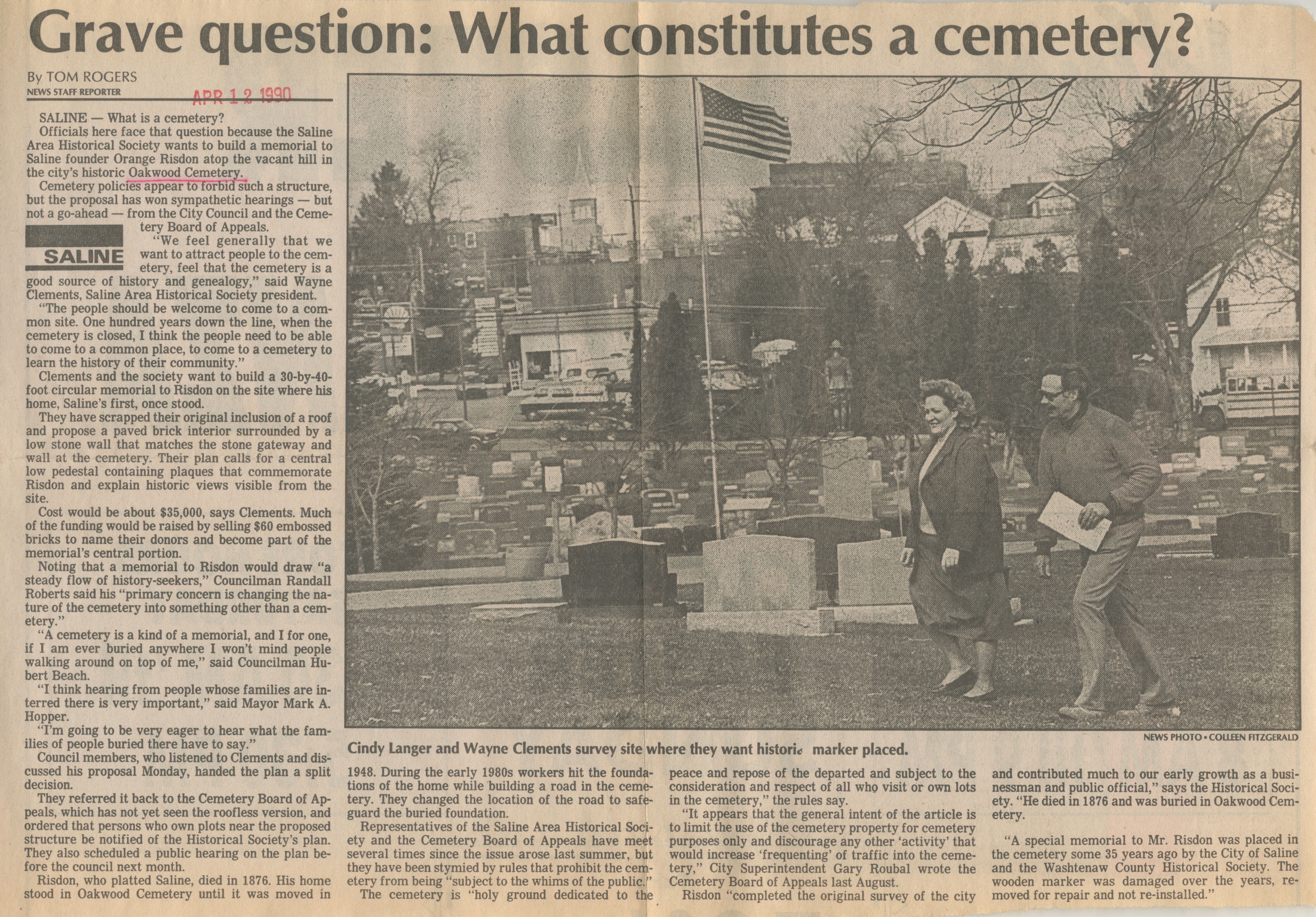 The Choice Of Orange Risdon

A surveyor found his own town site on the Chicago Road

In the mid-nineteenth century, surveyor Orange Risdon mapped thousands of square miles of Michigan wilderness for the federal government. He picked the site of Saline to start his own town.

Risdon first saw his future town site in 1824, while surveying for the road that would link Detroit and Chicago. In addition to its location on the Chicago Road—today US-12—the spot was surrounded by prime agricultural land and had the Saline River to provide water power.

Risdon bought 160 acres the same year the road survey came through. In 1829, he built a house on a hill overlooking the river. Now converted to apartments, the house still stands on Henry Street, where it was moved in 1948 to make room for an expansion of the Oakwood Cemetery.

Risdon was appointed Saline's first postmaster and the first justice of the peace. In the early years, his home served not only as the town's post office but also as its polling place, a hotel for passing travelers, and even a general store—Risdon rented his parlor to storekeeper Silas Finch until Finch was able to complete his own building at the corner of Michigan Avenue and Ann Arbor Street.

Risdon continued to develop Saline until his death in 1876 at age eighty-nine. For the most part, the town's economy in his day was based on supplying and servicing the surrounding farm community. When a spur of the Detroit, Hillsdale, and Indiana railroad reached town in 1870, Saline became an important shipping point for grain and livestock. The original 1870 railroad station, recently restored by the Saline Area Historical Society, is now being used as a museum and meeting place. When the town began to thrive, thanks to the railroad, William Davenport, who owned the general store, organized the Citizens Bank of Saline. In 1876, the prosperous banker bought an entire block in the center of town and built a mansion that still stands at 300 E. Michigan.

Saline's pioneer era ended in about 1880, according to local historian Wayne Clements. For the next eighty years, the town hardly grew at all, he says. "There were infrastructure problems, and although Saline had a railroad, so did Ann Arbor and Ypsilanti." The hiatus helped preserve Saline's small-town character.

Saline's economic resurgence began in 1937, when Henry Ford bought and restored the old Schuyler Mill and started a soybean processing plant there. (Today the old mill is Weller's banquet facility.) In the 1940's, R & B Machine Tool and Universal Die Casting built factories, and in 1966 Ford Motor Company returned to Saline, building a huge instrument and plastics plant.

Surrounded by fast-growing residential areas. Saline today is no longer the self-sufficient small town of a few decades ago. Many residents now commute to jobs outside the community. And though 1-94 has replaced it as the main route to Chicago, US-12 still generates a lot of traffic. Downtown Saline, which once catered exclusively to local farmers, now draws customers from around the region with its antiques stores, gift shops, and destination restaurants.

Wayne Clements, president of the Saline Area Historical Society, has mobilized the community to save Orange Risdon's livery barn, open the Depot Museum and acquire a caboose for it, and buy and restore the Rentschler farm. It's quite a series of accomplishments for a quiet, unassuming man who in his younger years did not even seem interested in history.

Recently, at Clements's fifty-year high school reunion, his old homeroom teacher pointed out that irony. But for Clements, history comes alive when it's about the community around him instead of the faraway and long ago. "I didn't know King George, but I know Alberta Rogers and the Brassows," he says.

Clements still lives in the Textile Road farmhouse where he grew up. He attended the Lodi Plains one-room school and graduated as salutatorian from Saline Union School. He went to Michigan State University, where he majored in agricultural engineering. Saline Township supervisor Bob Cook was his roommate.

"Even his family kept old things," Cook recalls. "Wayne had a little old twenty-two [rifle] that went back to his grandfather."

At MSU Clements met his wife, Jane, from Grosse Pointe Woods. (They have one grown daughter, Penny.) For nineteen years, he was away from Saline. He served a stint in the army, including a year in Korea; worked as a research engineer in Ford's agricultural division in Birmingham; and later moved to South Bend, Indiana, to work for Wheelabrator. He returned to Saline twenty-five years ago to be nearer his aging parents. He found work with an industrial cleaning franchise, Captain Clean, which he now owns.

In 1987 Alberta Rogers, then president of the historical society, recruited Clements to join. "He was involved from the word go," she recalls. He started out with mechanical work, putting a donated, Saline-made windmill back together. More hands-on jobs followed: two showcase homes that needed considerable work. He also found and mapped all the former one-room school sites in the Saline school district. He became the historical society's president in 1990.

When a livery barn that had been owned by Saline founder Orange Risdon was about to be torn down, Clements organized the society to save the structure. He launched an ongoing partnership between historic preservationists and the city government, getting permission to relocate the livery near the old railroad depot. That led to the project of turning the depot into a museum. The partnership with the city continues today with the purchase and historic restoration of the Rentschler farm.

Clements has worked to make it as easy as possible for people to get involved in the historical society's projects. He cut back on boring business meetings, replaced the traditional slate of officers with a team, and doesn't insist that volunteers join the society. He says he has no patience with groups that just sit around and talk. "It attracts people when we have things to do," he says.

"He listens," Kuss says. "He takes everybody's ideas and tries to bring his ideas and everyone else's together so we can move forward. And he doesn't get involved in politics.

"Saline is a mixture of new, been-here-awhile, and old-timers," says Kuss. "Wayne bridges that gap." •

That seems to be one of Clements's main goals. History is "a common thread that keeps us together," he says, adding that a hands-on project "gets people interested who do not have roots in Saline."

Clements is excited about his current project: he and Saline High history teacher Jim Cameron are developing a curriculum of local history classes that will be held at the Depot Museum and the Rentschler Farm Museum.

"I like to tell the kids, 'Someday you'll take my place, or be mayor or superintendent of schools, and you need to understand how we got there.'"

It's all that remains of the Detroit, Hillsdale, and Northern Indiana line

On July 4, 1870, Saline residents had two reasons to celebrate: it was not only the nation's birthday, it was also the day the railroad reached their village. The Detroit, Hillsdale, and Northern Indiana railroad never got to Indiana or Detroit, but the line connected Saline to points east and west for the next ninety-one years.

In the post-Civil War period, southern Michigan was experiencing "railroad mania," wrote Willis Dunbar in All Aboard: A History of Railroads in Michigan. "Every city, town, hamlet sought a railroad, for it was universally believed that without one a community had little hope for growth."

The coming of the railroad gave an economic boost to Saline's farmers, who could ship their apples, grain, and livestock to larger markets. Eleven years after the railroad arrived, Charles Chapman wrote in his county history that it had "opened up a market for the productions of the country, enabling farmers and others to realize handsomely on many of their investments."

Trains from Saline, Manchester, and Bridgewater connected to the Michigan Central at Ypsilanti. At a station just past Hillsdale, passengers and freight could switch to the Lake Shore and Michigan Southern, the Michigan Central's major rival. And beginning in 1876, trains could connect with the north-south Ann Arbor Railroad at Pittsfield Junction, near Morgan Road in Pittsfield Township.

At the Farmers' Mercantile across the street from the Saline depot, farmers had their oats, corn, and wheat weighed, ground, and stored in a grain elevator. Train cars were loaded from the elevator by gravity.

"Farmers used to drive cattle through the streets of Saline to the stockyards on the east side of the station," reports Saline historian Wayne Clements. Wool, which Chapman says found "a good and steady market," was stored in a barn next to the stockyards until there was enough to fill a boxcar.

Incoming trains brought farm machinery and replacement parts for farmers, and lumber and coal for city residents. Sidings near the station and the mercantile made room for storage, loading, and unloading.

A stationmaster oversaw the whole operation. "He was always an important figure in the community," says Clements. "He met with the farmers, cooperated with the conductors, got in repair parts of implements, did the paperwork." A telegraph operator also worked out of Saline's station. The railroad's last stationmaster took care of both the Saline and the Bridgewater stops.

After World War I, the Detroit, Hillsdale, and Northern Indiana line was acquired by the New York Central system. The last passenger train ran in 1938. Freight service ended in 1961, when the local trains were no longer able to compete with trucks that could offer door-to-door service. Today only one section of the original track is still in use: a spur from Pittsfield Junction to Maple Road connects Saline's Ford plant to the main line of the Ann Arbor Railroad.

In the years after the trains stopped running, the depot near North Ann Arbor Street was used as a garden shop, a storage shed for Meredith Bixby's puppets (see article, p. 71), and a practice space for the Saline Area Players. On July 4, 1995,125 years after the station originally opened, it reopened as the home of the Saline Area Museum. One of the museum's most recent acquisitions is a 1909 caboose, meticulously restored by the former owner. "It's as though the crew walked out yesterday," says Clements.