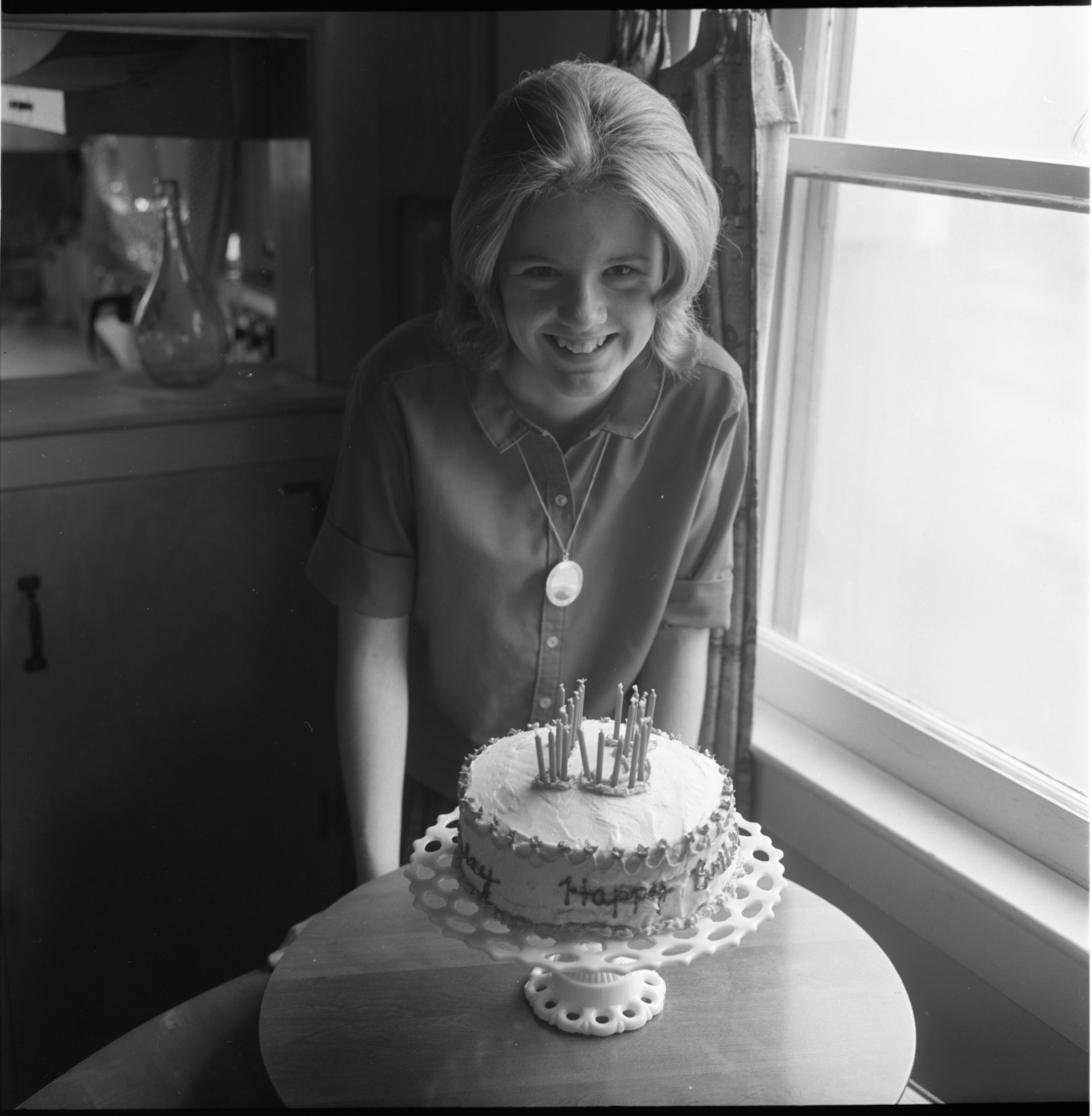 Published In
Ann Arbor News, March 12, 1964
Caption
GREMLINS, BE GONE! Vicki Reynolds of 588 Dellwood Dr. makes a final check of the candles on her birthday cake before lighting them and blowing them out with a wish for some good luck tomorrow. She plans to dispel the superstitious gloom of Friday the 13th - made all the more ominous by the simultaneous occurrence of her 13th birthday - with a slumber party on a "good luck" theme at her home. She is the daughter of Mr. and Mrs. George Reynolds and a seventh grade student at Forsythe Junior High.
Copyright
Copyright Protected 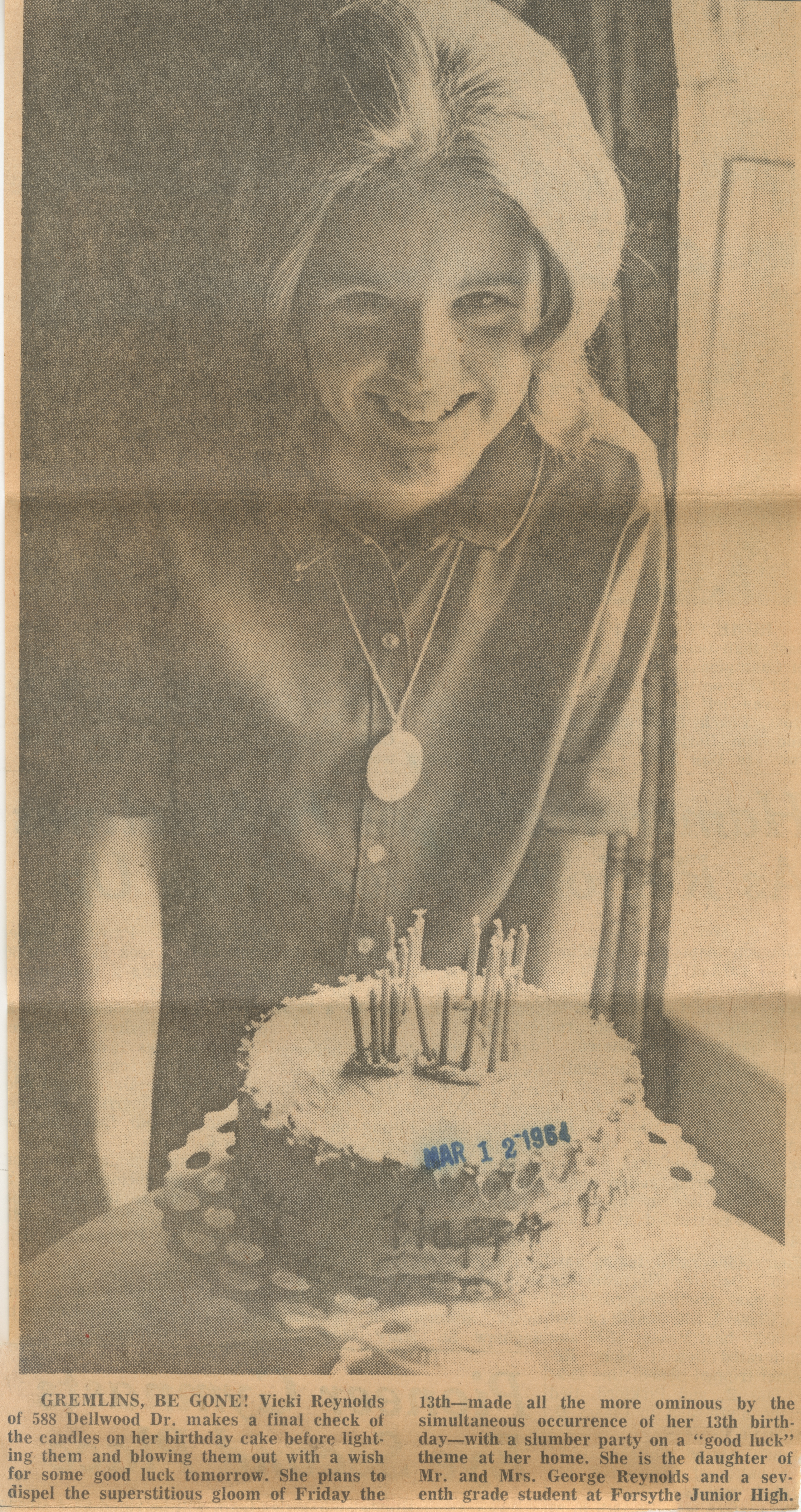 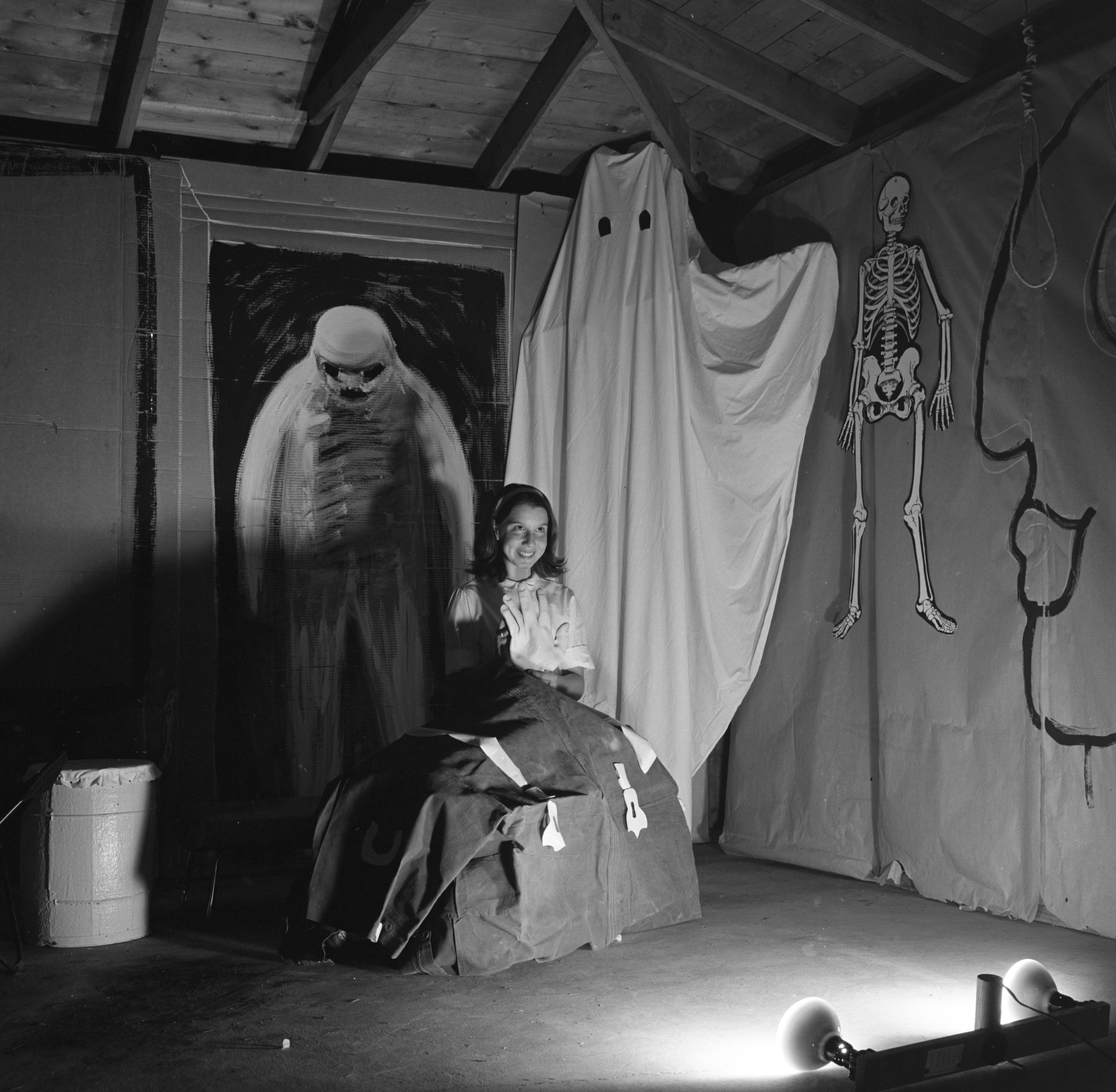 Published In
Ann Arbor News, October 13, 1967
Caption
A lot of people are afraid of triskaidekaphobia - at least the spelling of it. Actually, it refers to superstitions some hold about things like walking under ladders and having anything to do with the number 13. For example, they'd like to skip today - Friday, the 13th - altogether. But Becky Castor (above) of 2217 Independence exhibits some of the stuff in her street's name by celebrating her 13th birthday today with 13 young guests and all kinds of spooky objects intended to spoof the whole idea. She'll prove her point...if one of her guests doesn't break a leg, or something.
Copyright
Copyright Protected 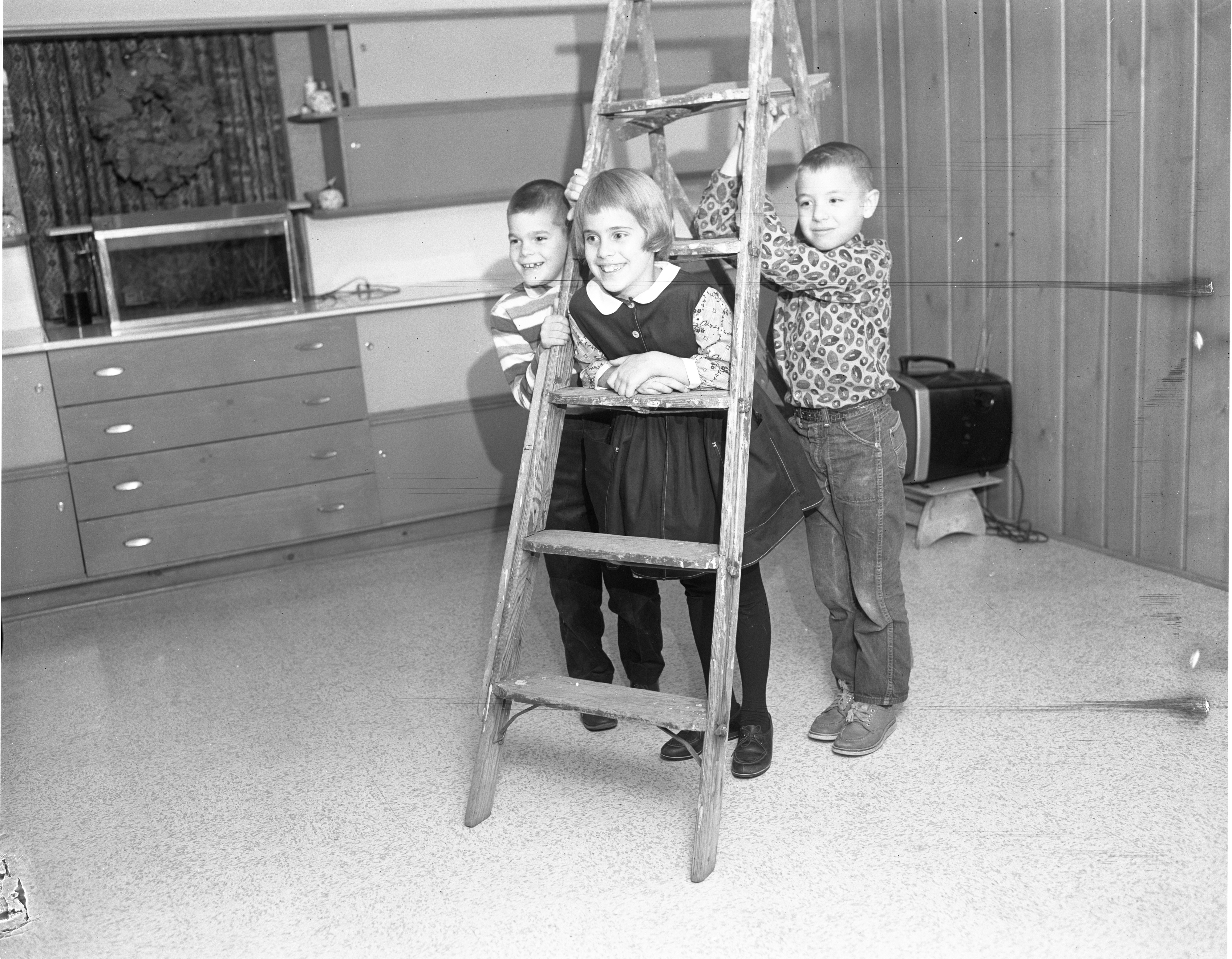 Published In
Ann Arbor News, December 13, 1963
Caption
NO 13TH FEARS: Friday-the-13th superstitions hold no fears for these three youngsters, all of whom became eight years old today - which is Friday the 13th. Not only are they unafraid of passing under a ladder, but they even pause there. They are (from left) George Morley Jr., Debbie McWilliams and Christian Brown. The three are second-grade classmates at Burns Park School. They are children of Dr. and Mrs. George W. Morley of 2210 Brockman, Dr. and Mrs. John R. McWilliams of 2100 Scottwood and Prof. and Mrs. Richard K. Brown of 2108 Scottwood.
Copyright
Copyright Protected 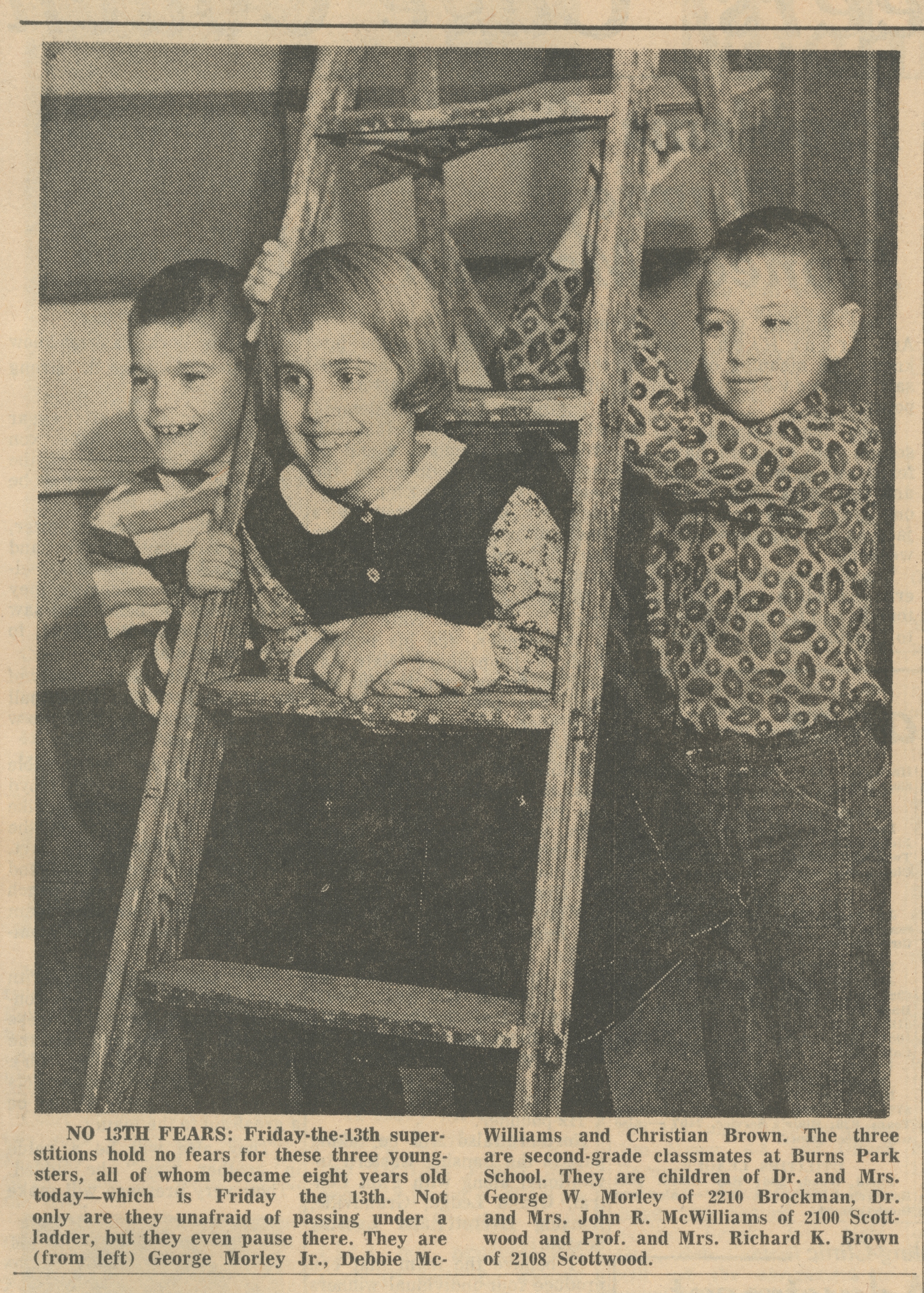 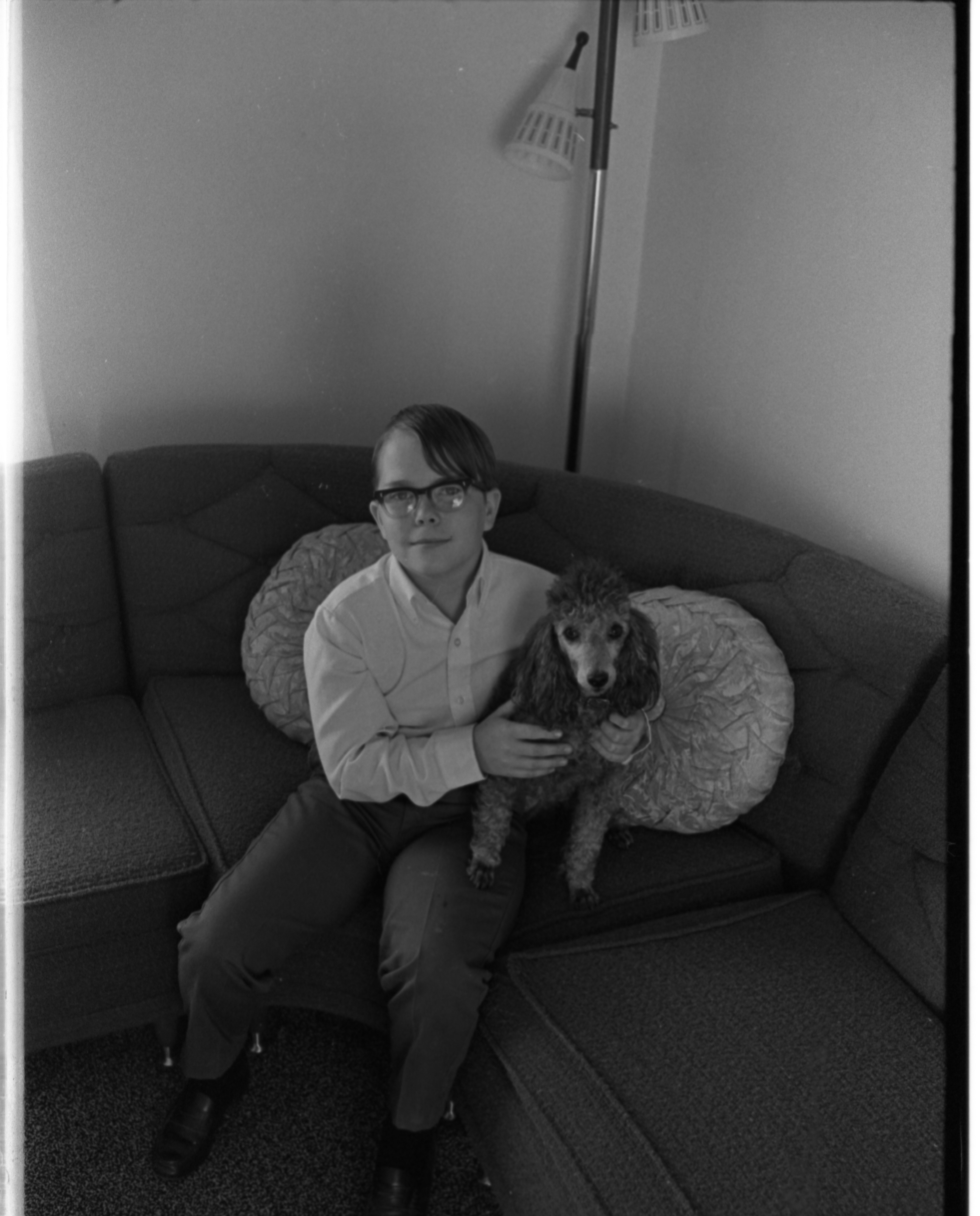 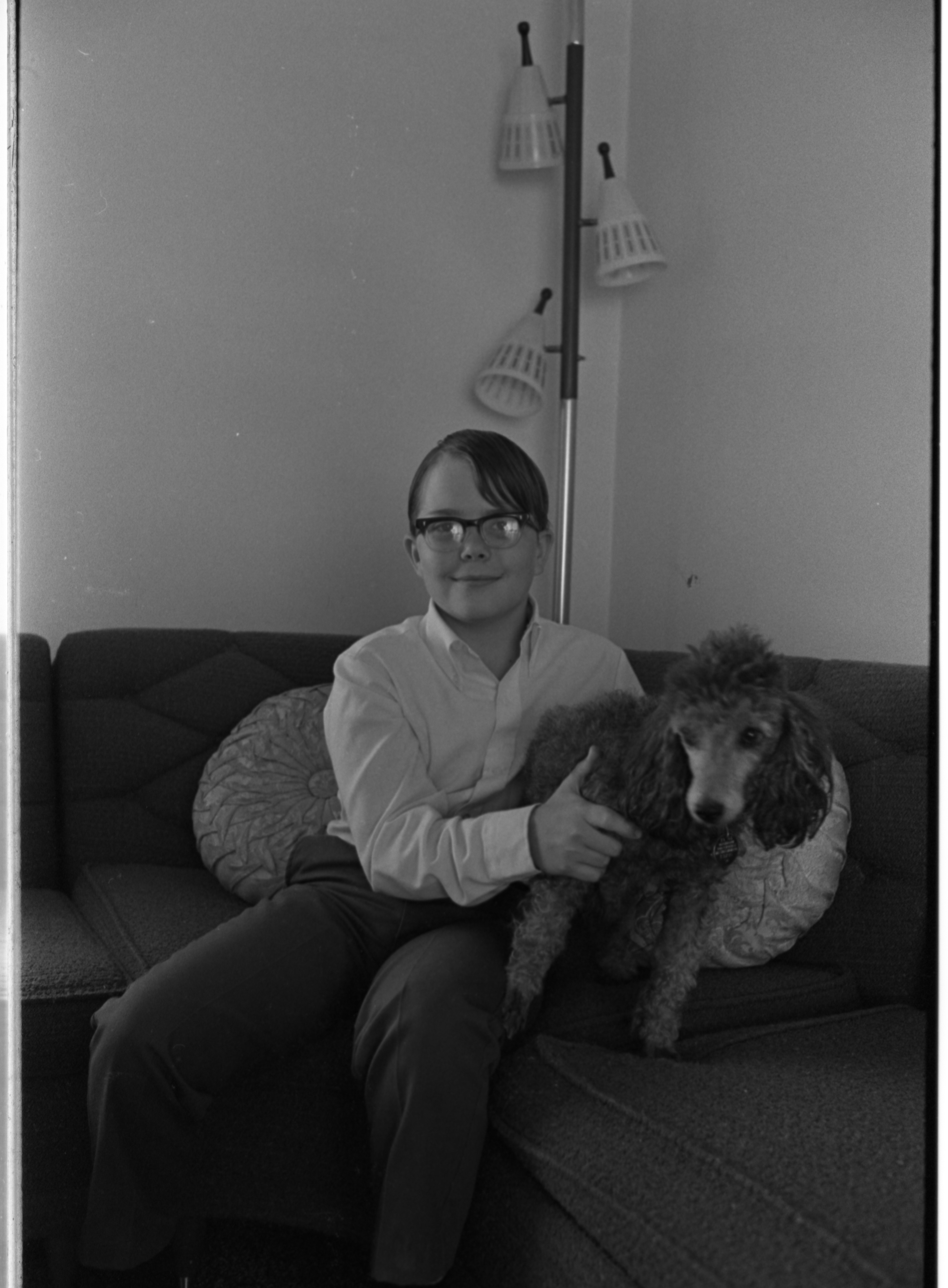 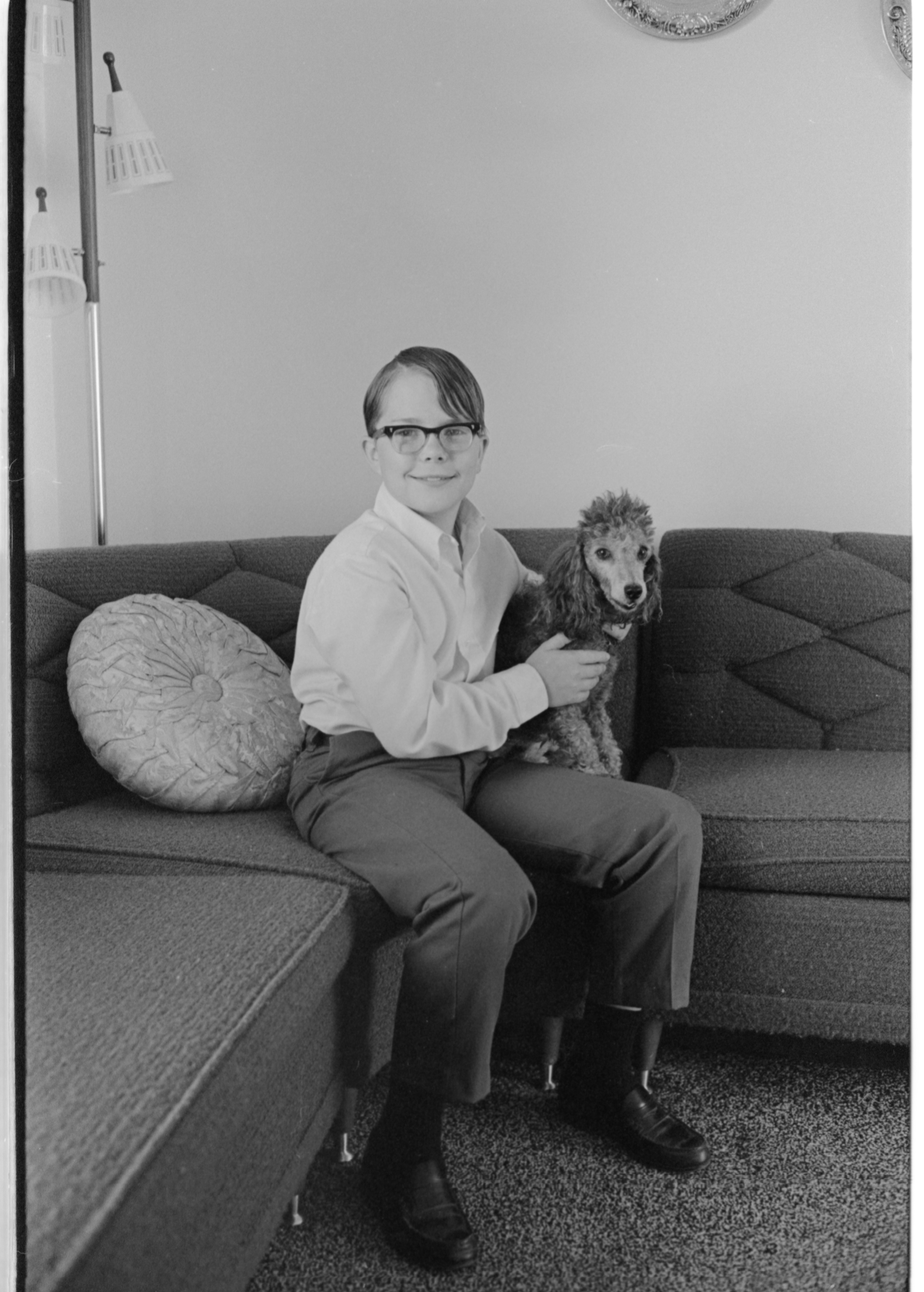 Published In
Ann Arbor News, September 13, 1968
Caption
He's A Thirteen-Ager - The number "13" just seems to be in the cards for William J. Burton, shown here with his pet poodle. The lad is 13 years old today -- and today, is of course, Friday the 13th. William, an eight grader at Scarlett Junior High, is "really a 13 boy," according to his mother. He was the 13th member on his mother's side of the family, was born at 5:13 a.m. on Sept. 13, 1955, and weighed in at six pounds, 7 ounces, which adds up to the number 13. William plans to celebrate his birthday with a family party. He is the son of Mr. and Mrs. William W. Burton, 3440 Lasalle, Ann Arbor.
Copyright
Copyright Protected 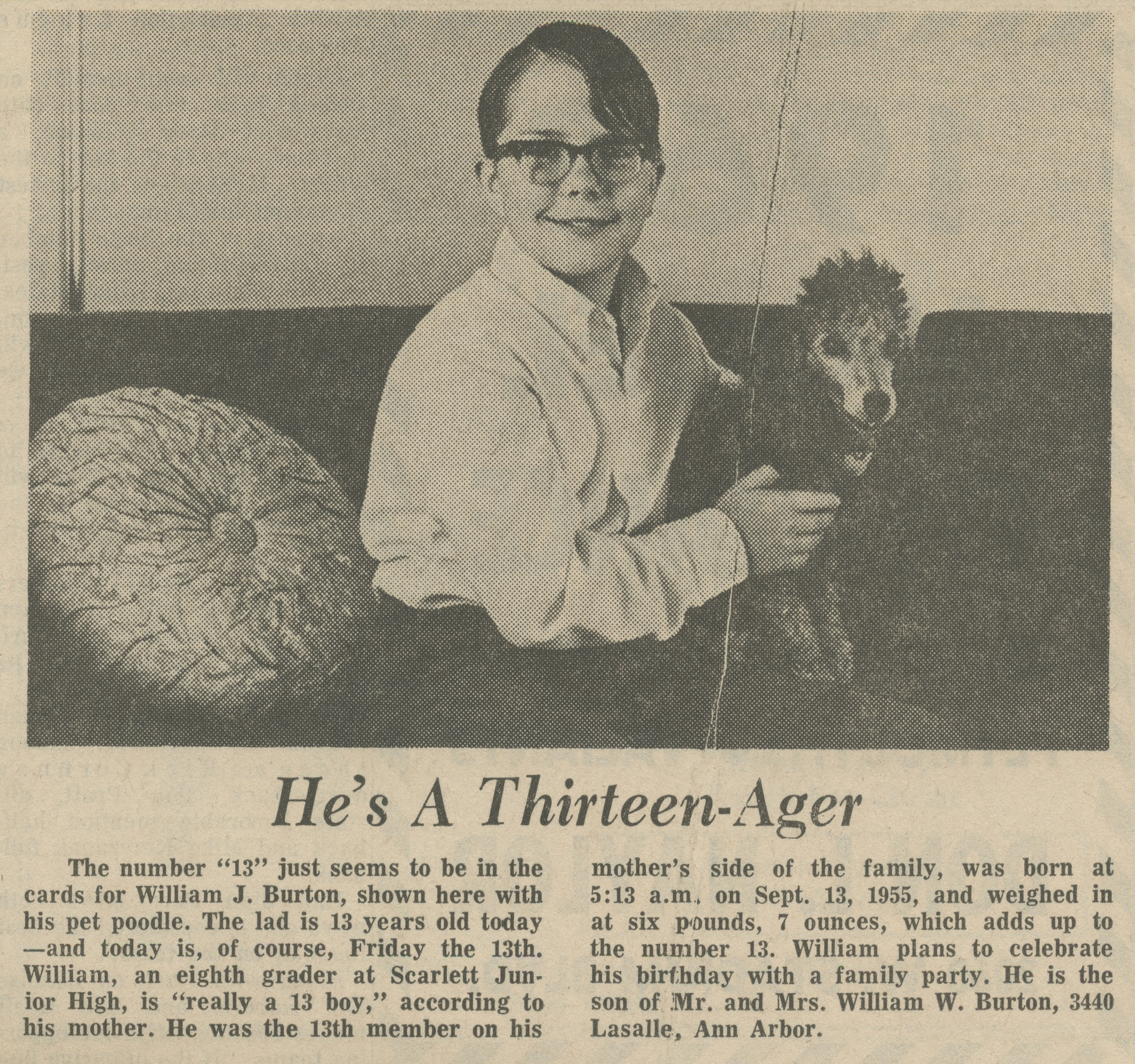 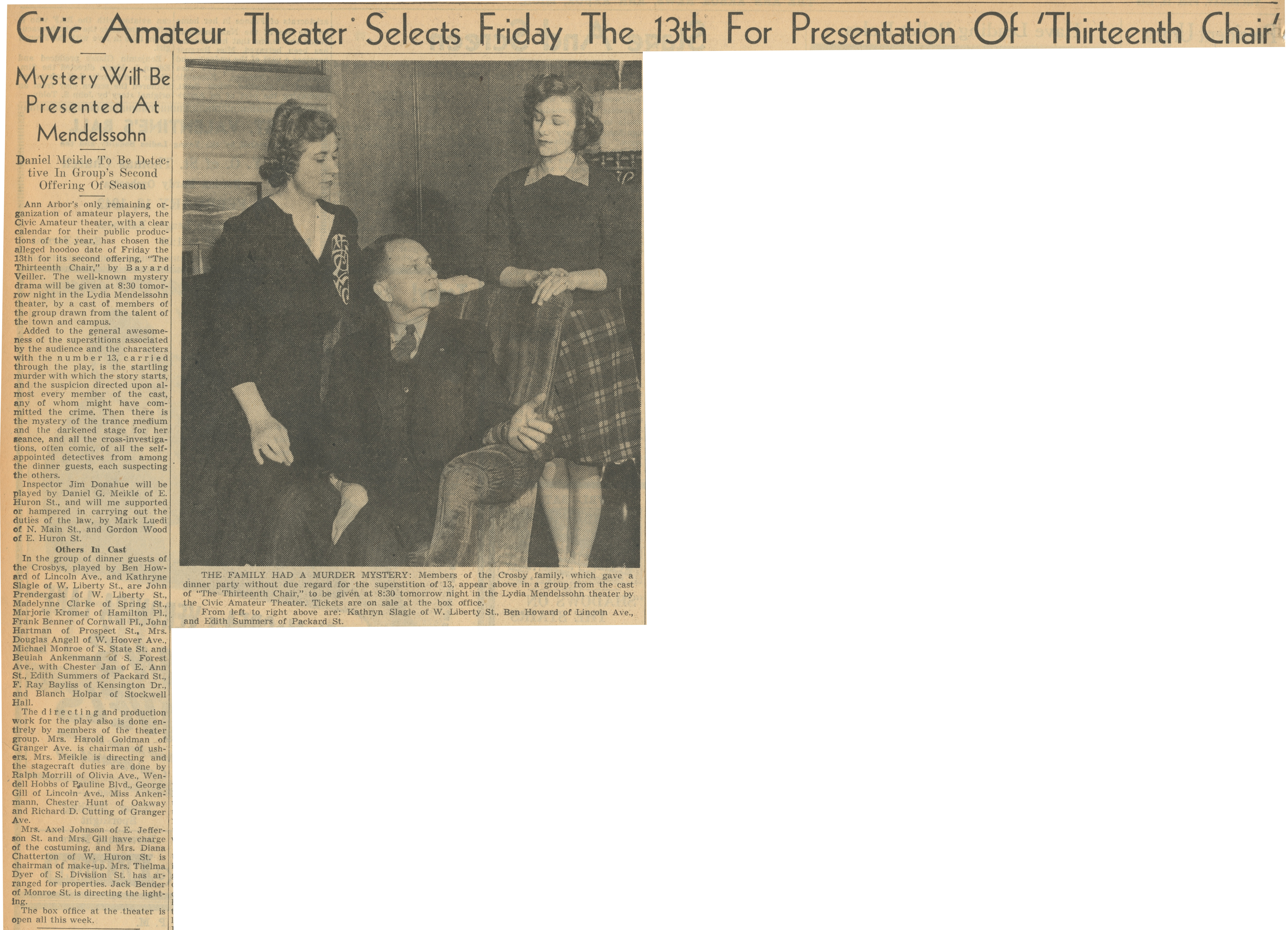