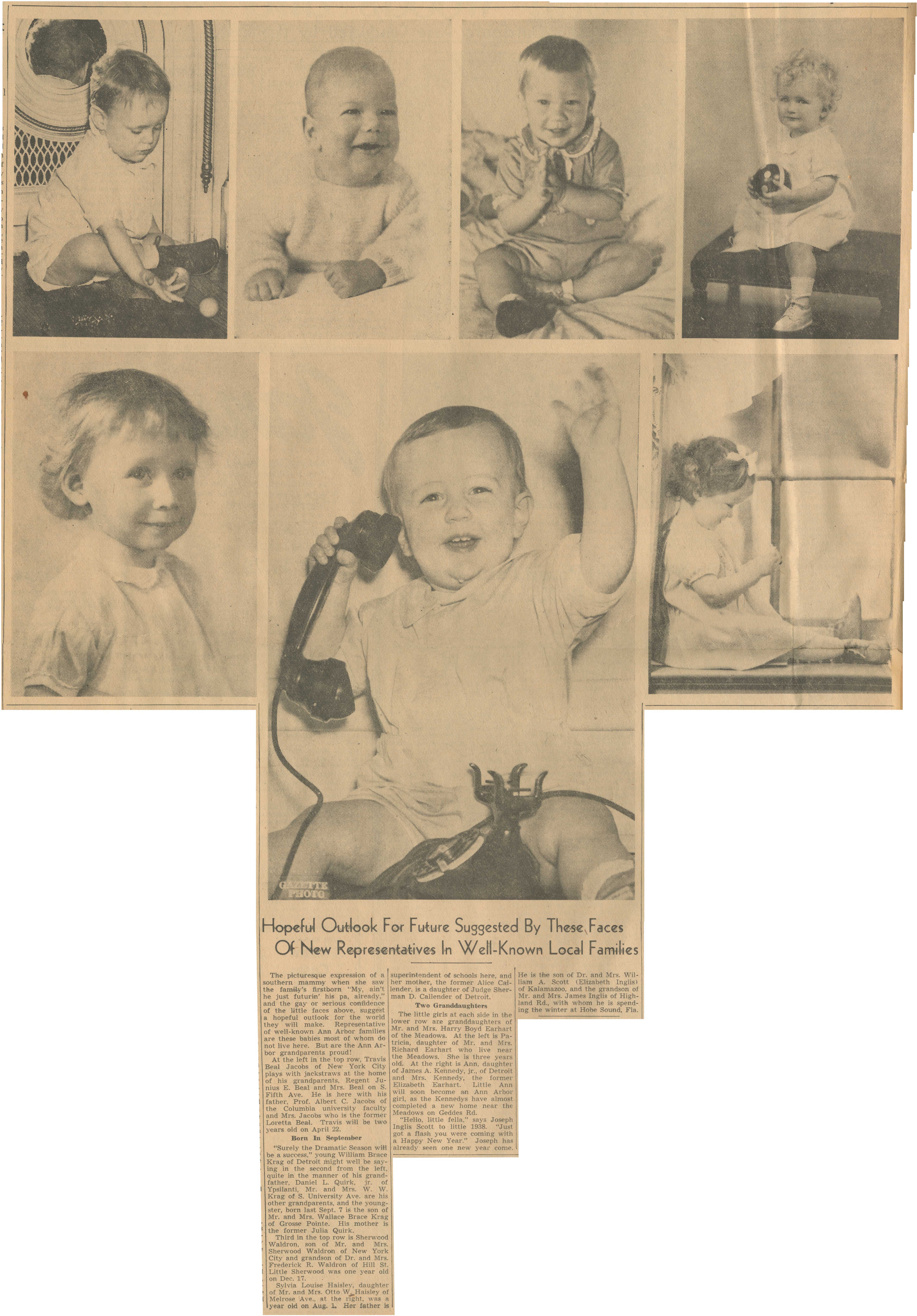 The picturesque expression of a southern mammy when she saw the family's firstborn "My, ain't he just futurin' his pa, already," and the gay or serious confidence of the little faces above, suggest a hopeful outlook for the world they will make. Representative of well-known Ann Arbor families are these babies most of whom do not live here. But are the Ann Arbor grandparents proud!
At the left in the top row, Travis Beal Jacobs of New York City plays with jackstraws at the home of his grandparents, Regent Junius E. Beal and Mrs. Beal on S. Fifth Ave. He is here with his father, Prof. Albert C. Jacobs of the Columbia university faculty and Mrs. Jacobs who is the former Loretta Beal. Travis will be two years old on April 22.
Born In September
"Surely the Dramatic Season will be a success," young William Brace Krag of Detroit might well be saying in the second from the left, quite in the manner of his grandfather, Daniel L. Quirk, jr. of Ypsilanti. Mr. and Mrs. W. W. Krag of S. University Ave. are his other grandparents, and the youngster, born last Sept. 7 is the son of Mr. and Mrs. Wallace Brace Krag of Grosse Pointe. His mother is the former Julia Quirk.
Third in the top row is Sherwood Waldron, son of Mr. and Mrs. Sherwood Waldron of New York City and grandson of Dr. and Mrs. Frederick R. Waldron of Hill St. Little Sherwood was one year old on Dec. 17.
Sylvia Louise Haisley, daughter of Mr. and Mrs. Otto W. Haisley of Melrose Ave., at the right, was a year old on Aug. 1. Her father is superintendent of schools here, and her mother, the former Alice Callender, is a daughter of Judge Sherman D. Callender of Detroit.
Two Granddaughters
The little girls at each side in the lower row are granddaughters of Mr. and Mrs. Harry Boyd Earhart of the Meadows. At the left is Patricia, daughter of Mr. and Mrs. Richard Earhart who live near the Meadows. She is three years old. At the right is Ann, daughter of James A. Kennedy, jr., of Detroit and Mrs. Kennedy, the former Elizabeth Earhart. Little Ann will soon become an Ann Arbor girl, as the Kennedys have almost completed a new home near the Meadows on Geddes Rd.
"Hello, little fella," says Joseph Inglis Scott to little 1938. "Just got a flash you were coming with a Happy New Year." Joseph has already seen one new year come. He is the son of Dr. and Mrs. William A. Scott (Elizabeth Inglis) of Kalamazoo, and the grandson of Mr. and Mrs. James Inglis of Highland Rd., with whom he is spending the winter at Hobe Sound, Fla.