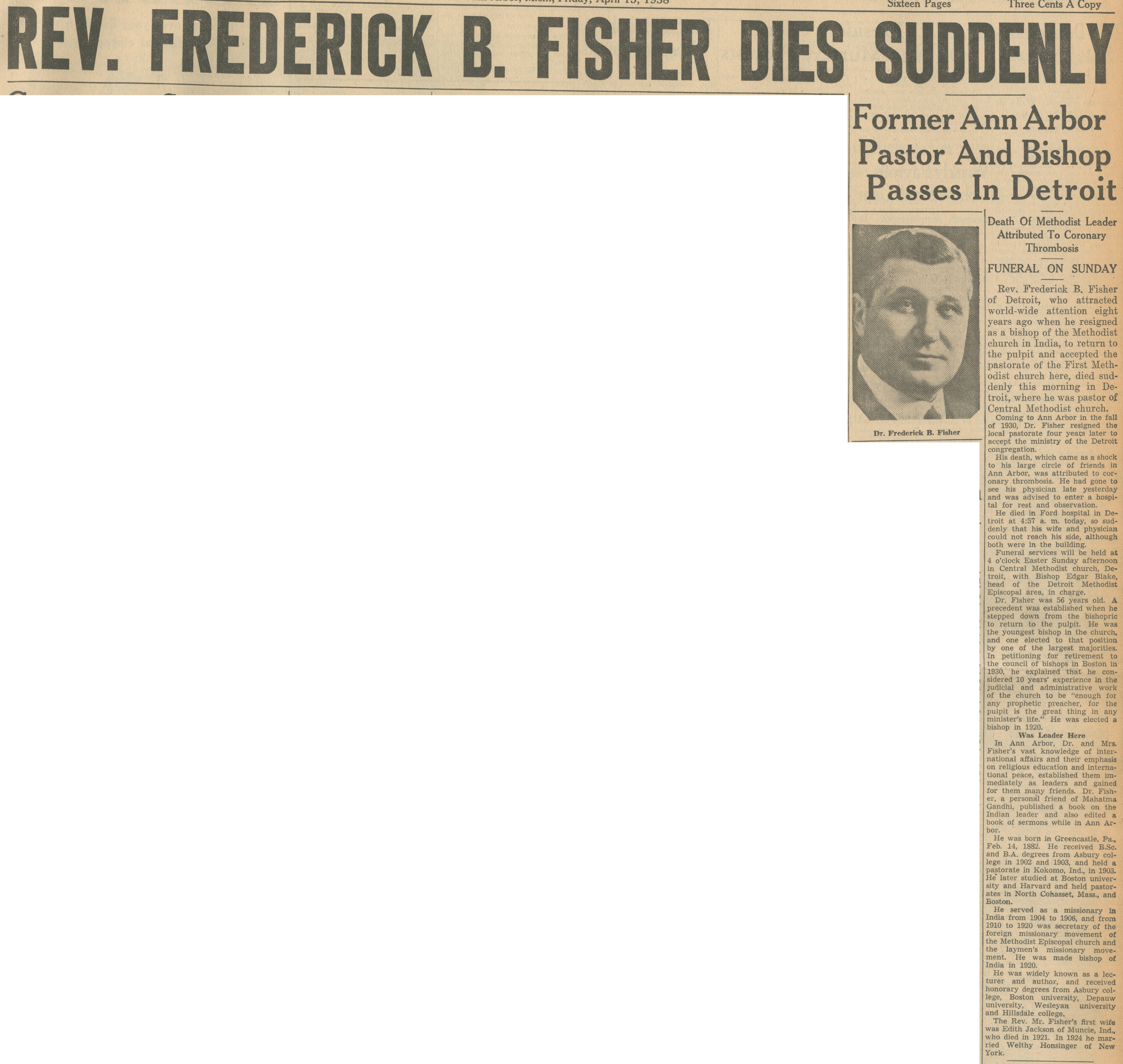 Former Ann Arbor Pastor and Bishop Passes In Detroit
Death of Methodist Leader Attributed To Coronary Thrombosis
FUNERAL ON SUNDAY
Rev. Frederick B. Fisher of Detroit, who attracted world-wide attention eight years ago when he resigned as a bishop of the Methodist church in India, to return to the pulpit and accepted the pastorate of the First Methodist church here, died suddenly this morning in Detroit, where he was pastor of Central Methodist church.
Coming to Ann Arbor in the fall of 1930, Dr. Fisher resigned the local pastorate four years later to accept the ministry of the Detroit congregation.
His death, which came as a shock to his large circle of friends in Ann Arbor, was attributed to coronary thrombosis. He had gone to see his physician late yesterday and was advised to enter a hospital for rest and observation.
He died in Ford hospital in Detroit at 4:57 a.m. today, so suddenly that his wife and physician could not reach his side, although both were in the building.
Funeral services will be held at 4 o'clock Easter Sunday afternoon in Central Methodist church, Detroit, with Bishop Edgar Blake, head of the Detroit Methodist Episcopal area, in charge.
Dr. Fisher was 56 years old. A precedent was established when he stepped down from the bishopric to return to the pulpit. He was the youngest bishop in the church, and one elected to that position by one of the largest majorities. In petitioning for retirement to the council of bishops in Boston in 1930, he explained that he considered 10 years' experience in the judicial and administrative work of the church to be "enough for any prophetic preacher, for the pulpit is the great thing in any minister's life." He was elected a bishop in 1920.
Was Leader Here
In Ann Arbor, Dr. and Mrs. Fisher's vast knowledge of international affairs and their emphasis on religious education and international peace, established them immediately as leaders and gained for them many friends. Dr. Fisher, a personal friend of Mahatma Gandhi, published a book on the Indian leader and also edited a book of sermons while in Ann Arbor.
He was born in Greencastle, Pa., Feb. 14, 1882. He received B.Sc. and B.A. degrees from Asbury college in 1902 and 1903, and held a pastorate in Kokomo, Ind., in 1903. He later studied at Boston university and Harvard and held pastorates in North Cohasset, Mass., and Boston.
He served as a missionary in India from 1904 to 1906, and from 1910 to 1920 was secretary of the foreign missionary movement of the Methodist Episcopal church and the laymen's missionary movement. He was made bishop of India in 1920.
He was widely known as a lecturer and author, and received honorary degrees from Asbury college, Boston university, Depauw university, Wesleyan university and Hillsdale college.
The Rev. Mr. Fisher's first wife was Edith Jackson of Muncie, Ind., who died in 1921. In 1924 he married Welthy Honsinger of New York.