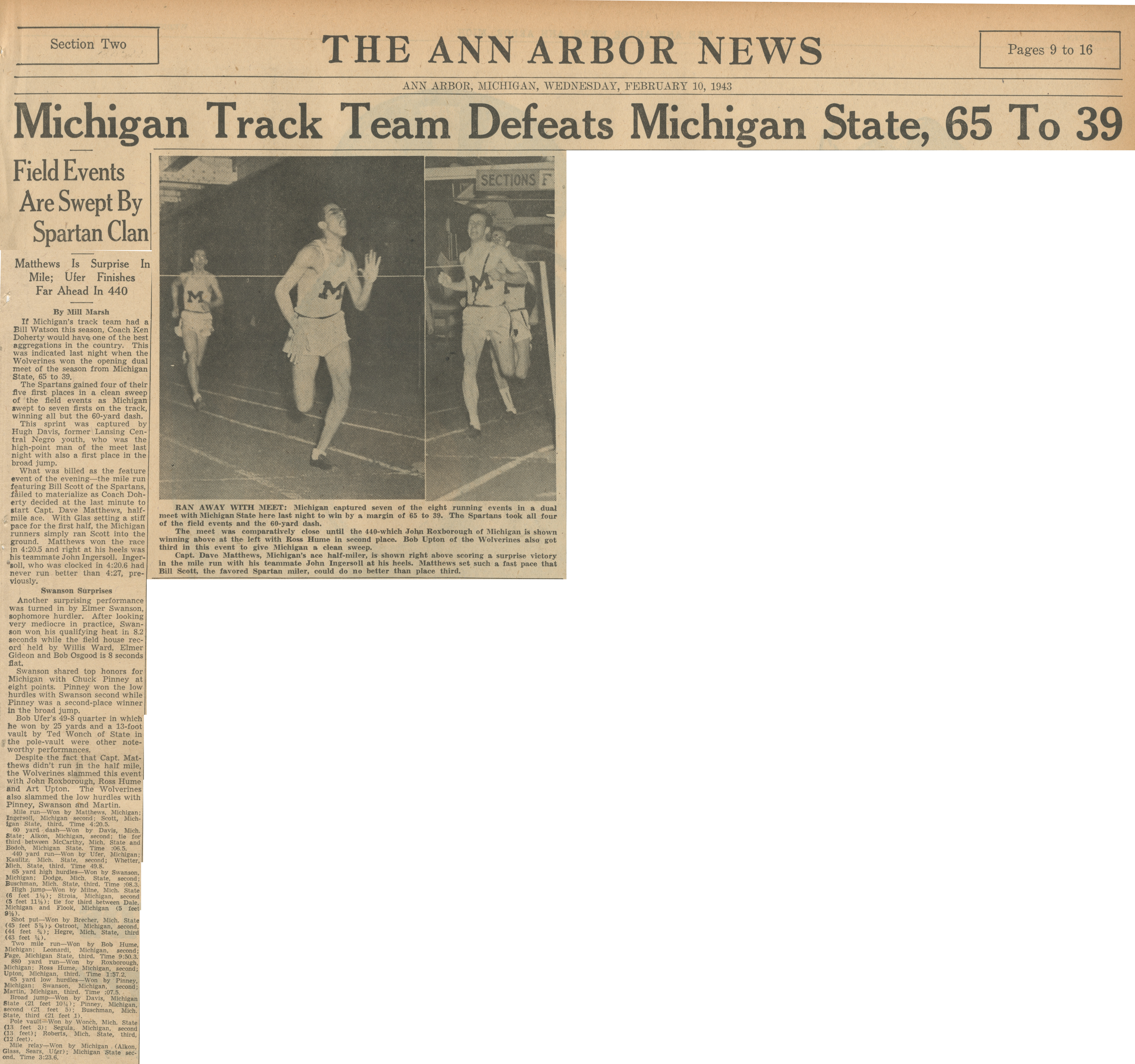 Matthews Is Surprise In Mile; Ufer Finishes Far Ahead In 440

If Michigan’s track team had a Bill Watson this season, Coach Ken Doherty would have one of the best aggregations in the country. This was indicated last night when the Wolverines won the opening dual meet of the season from Michigan State, 65 to 39.

The Spartans gained four of their five first places in a clean sweep of the field events as Michigan swept to seven firsts on the track, winning all but the 60-yard dash.

This sprint was captured by Hugh Davis, former Lansing Central Negro youth, who was the high-point man of the meet last night with also a first place in the broad jump.

What was billed as the feature event of the evening—the mile run featuring Bill Scott of the Spartans, failed to materialize as Coach Doherty decided at the last minute to start Capt. Dave Matthews, half-mile ace. With Glas setting a stiff pace for the first half, the Michigan runners simply ran Scott into the ground. Matthews won the race in 4:20.5 and right at his heels was his teammate John Ingersoll. Ingersoll, who was clocked in 4:20.6 had never run better than 4:27, previously.

Another surprising performance was turned in by Elmer Swanson, sophomore hurdler. After looking very mediocre in practice, Swanson won his qualifying heat in 8.2 seconds while the field house record held by Willis Ward, Elmer Gideon and Bob Osgood is 8 seconds flat.

Swanson shared top honors for Michigan with Chuck Pinney at eight points. Pinney won the low hurdles with Swanson second while Pinney was a second-place winner in the broad jump.

Bob Ufer’s 49-8 quarter in which he won by 25 yard and a 13-foot vault by Ted Wonch of State in the pole-vault were other noteworthy performances.

Despite the fact that Capt. Matthews didn't run in the half mile, the Wolverines slammed this event with John Roxborough, Ross Hume and Art Upton. The Wolverines also slammed the low hurdles with Pinney, Swanson and Martin.

RAN AWAY WITH MEET: Michigan captured seven of the eight running events in a dual meet with Michigan State here last night, to win by a margin of 65 to 39. The Spartans took all four of the field events and the 60-yard dash.

The meet was comparatively close until the 440-which John Roxborough of Michigan is shown winning above at the left with Ross Hume in second place. Bob Upton of the Wolverines also got third in this event to give Michigan a clean sweep.

Capt. Dave Matthews, Michigan’s ace half-miler, is shown right above scoring a surprise victory in the mile run with his teammate John Ingersoll at his heels. Matthews set such a fast pace that Bill Scott, the favored Spartan miler, could do no better than place third.