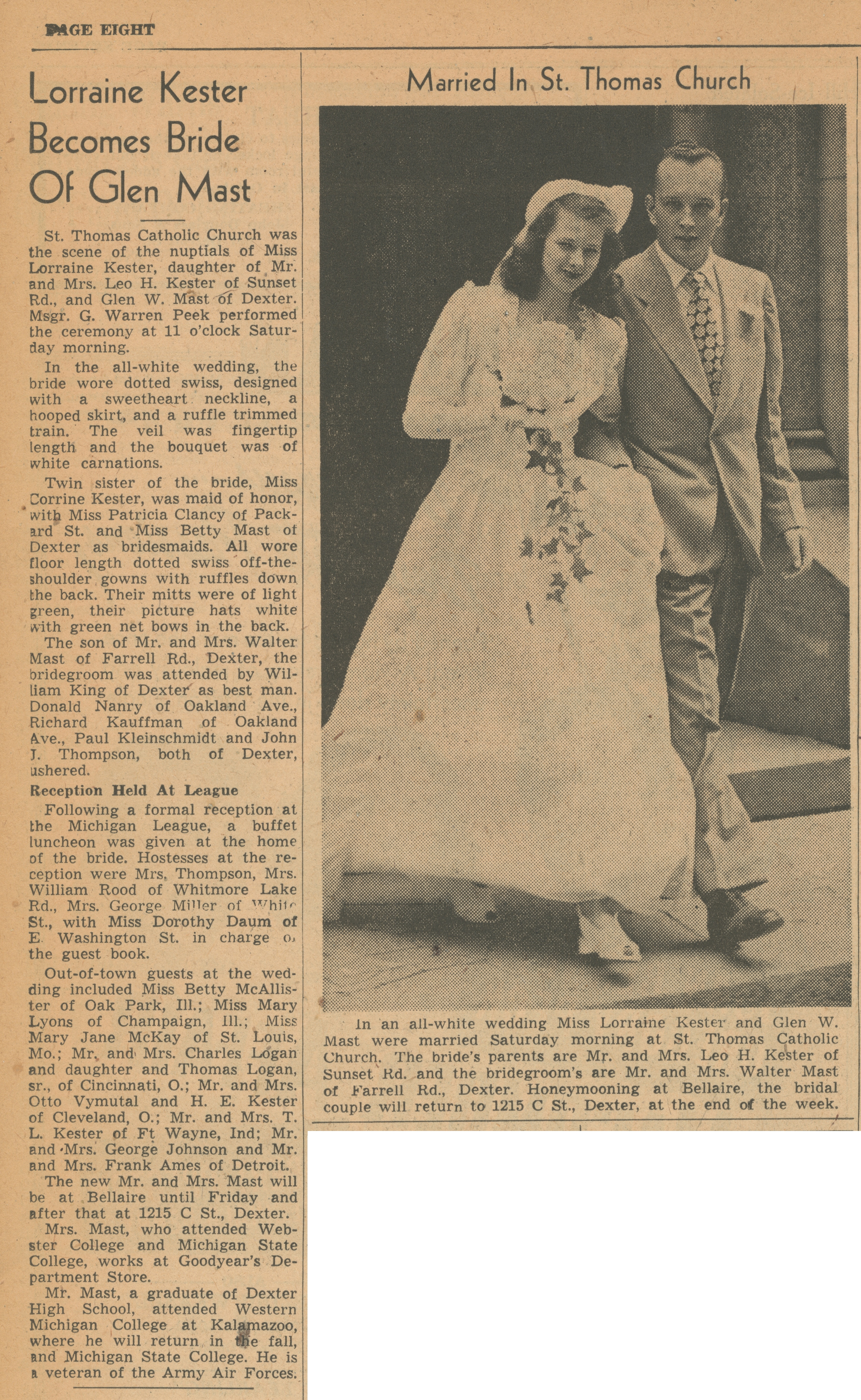 In the all-white wedding, the bride wore a dotted swiss, designed with a sweetheart neckline, a hooped skirt, and a ruffle trimmed train. The veil was fingertip length and the bouquet was of white carnations.

Twin sister of the bride, Miss Corrine Kester, was maid of honor, with Miss Patricia Clancy of Packard St. and Miss Betty Mast of Dexter as bridesmaids. All wore floor length dotted swiss off-the-shoulder gowns with ruffles down the back. Their mitts were of light green, their picture hats white with green net bows in the back.

The son of Mr. and Mrs. Walter Mast of Farrell Rd., Dexter, the bridegroom was attended by William King of Dexter as best man. Donald Nanry of Oakland Ave., Richard Kauffman of Oakland Ave., Paul Kleinschmidt and John J. Thompson, both of Dexter, ushered.

Following a formal reception at the Michigan League, a buffet luncheon was given at the home of the bride. Hostesses at the reception were Mrs. Thompson, Mrs. William Rood of Whitmore Lake Rd., Mrs. George Miller of White St., with Miss Dorothy Daum of E. Washington St. in charge of the guest book.

The new Mr. and Mrs. Mast will be at Bellaire until Friday and after that at 1215 C St., Dexter.

Mr. Mast, a graduate of Dexter High School, attended Western Michigan College at Kalamazoo, where he will return in the fall, and Michigan State College. He is a veteran of the Army Air Forces.

PHOTO CAPTION: MARRIED IN ST. THOMAS CHURCH: In an all-white wedding Miss Lorraine Kester and Glen W. Mast were married Saturday morning at St. Thomas Catholic Church. The bride’s parents are Mr. and Mrs. Leo H. Kester of Sunset Rd. and the bridegroom’s are Mr. and Mrs. Walter Mast of Farrell Rd., Dexter. Honeymooning at Bellaire, the bridal couple will return to 1215 C St., Dexter, at the end of the week.