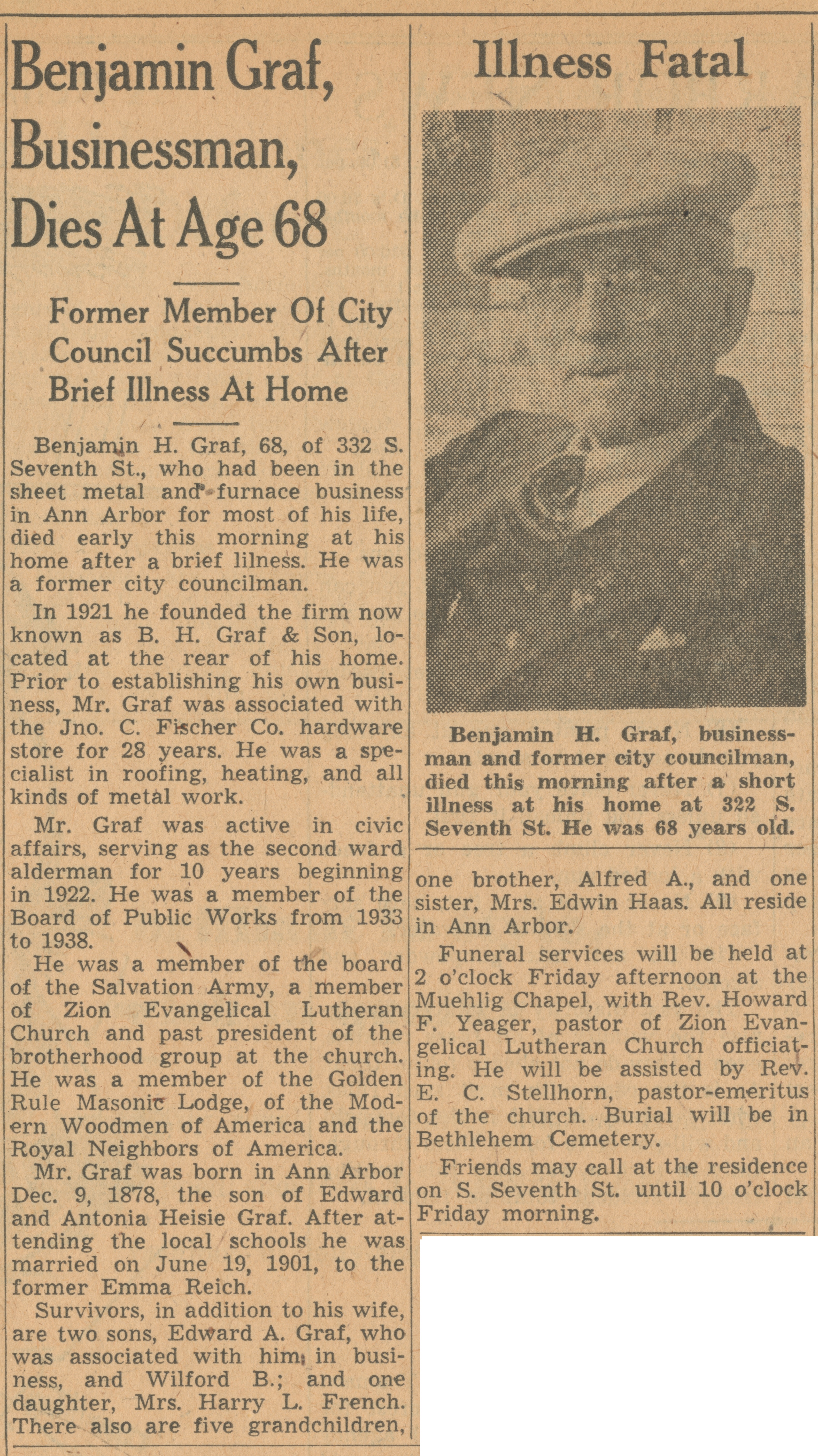 Former Member Of City Council Succumbs After Brief Illness At Home Benjamin H. Graf, 68, of 332 S. Seventh St., who had been in the sheet metal and furnace business in Ann Arbor for most of his life, died early this morning at his home after a brief illness. He was a former city councilman. In 1921 he founded the firm now known as B. H. Graf & Son, located at the rear of his home. Prior to establishing his own business, Mr. Graf was associated with the Jno. C. Fischer Co. hardware store for 28 years. He was a specialist in roofing, heating, and all kinds of metal work. Mr. Graf was active in civic affairs, serving as the second ward alderman for 10 years beginning in 1922. He was a member of the Board of Public Works from 1933 to 1938. He was a member of the board of the Salvation Army, a member of Zion Evangelical Lutheran Church and past president of the brotherhood group at the church. He was a member of the Golden Rule Masonic Lodge, of the Modern Woodmen of America and the Royal Neighbors of America. Mr. Graf was born in Ann Arbor Dec. 9, 1878, the son of Edward and Antonia Heisie Graf. After attending the local schools he was married on June 19, 1901, to the former Emma Reich. Survivors, in addition to his wife, are two sons, Edward A. Graf, who was associated with him in business, and Wilford B.; and one daughter, Mrs. Harry L. French. There are also five grandchildren, one brother, Alfred A., and one sister, Mrs. Edwin Haas. All reside in Ann Arbor. Funeral services will be held at 2’o’clock Friday afternoon at the Muehlig Chapel, with Rev. Howard F. Yeager, pastor of Zion Evangelical Lutheran Church officiating. He will be assisted by Rev. E. C. Stellhorn, pastor-emeritus of the church. Burial will be in Bethlehem Cemetery. Friends may call at the residence on S. Seventh St. until 10 o’clock Friday morning. IMAGE TEXT: ILLNESS FATAL. Benjamin H. Graf, businessman and former city councilman, died this morning after a short illness at his home at 322 S. Seventh St. He was 68 years old.