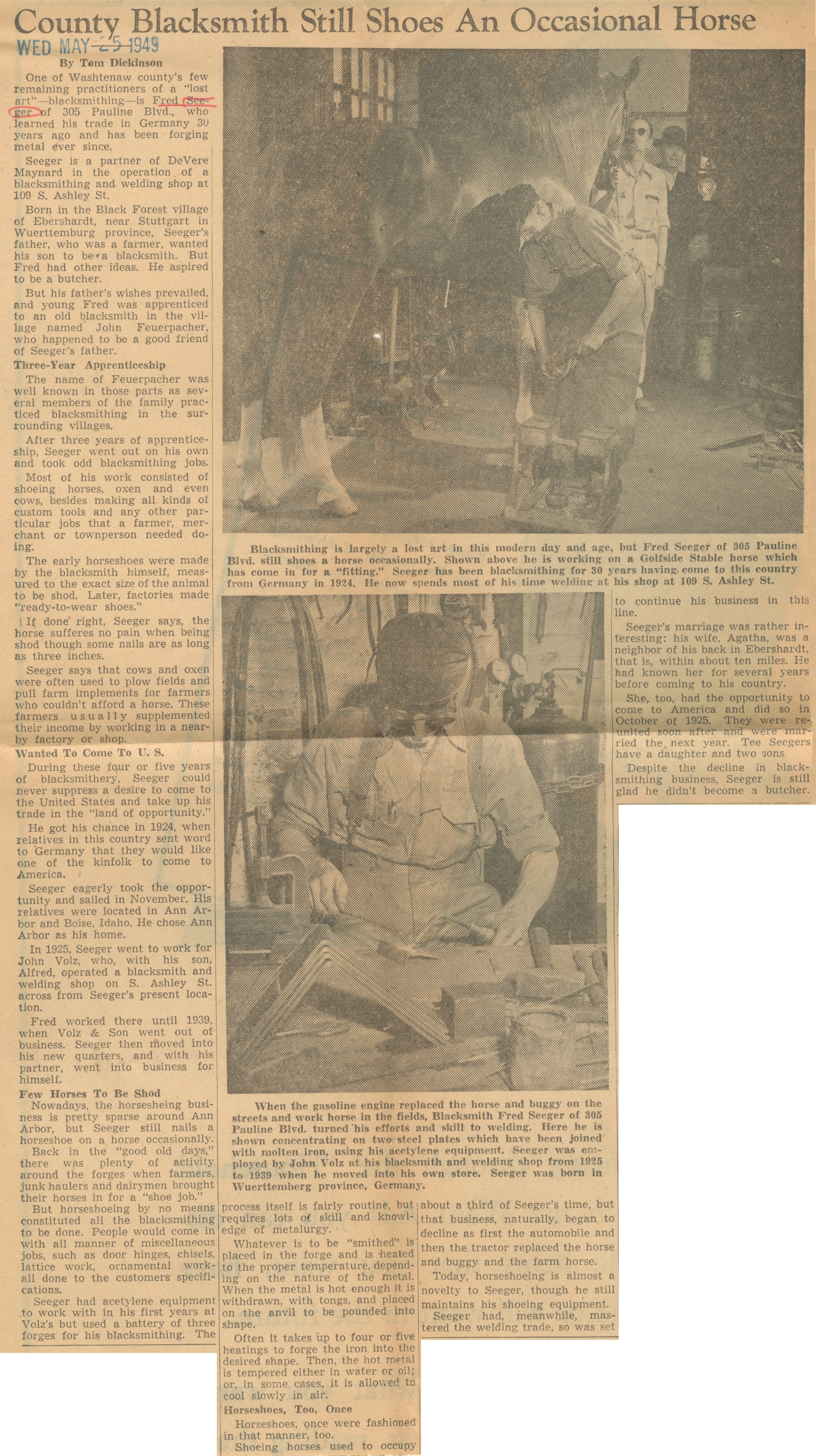 One of Washtenaw county’s few remaining practitioners of a “lost art"—blacksmithing—is Fred Seeger of 305 Pauline Blvd., who learned his trade in Germany 30 years ago and has been forging metal ever since.

Seeger is a partner of DeVere Maynard in the operation .of a blacksmithing and welding shop at 109 S. Ashley St.

Born in the Black Forest village of Ebershardt, near Stuttgart in Wuerttemburg province, Seeger’s father, who was a farmer, wanted his son to be a blacksmith. But Fred had other ideas. He aspired to be a butcher.

But his father's wishes prevailed, and young Fred was apprenticed to an old blacksmith in the village named John Feuerpacher, who happened to be a good friend of Seeger’s father.

The name of Feuerpacher was well known in those parts as several members of the family practiced blacksmithing in the surrounding villages.

After three years of apprenticeship, Seeger went out on his own and took odd blacksmithing jobs.

Most of his work consisted of shoeing horses, oxen and even cows, besides making all kinds of custom tools and any other particular jobs that a farmer, merchant or townperson needed doing.

The early horseshoes were made by the blacksmith himself, measured to the exact size of the animal to be shod. Later, factories made "ready-to-wear shoes.”

If done right, Seeger says, the horse suffers no pain when being shod though some nails are as long as three inches.

Seeger says that cows and oxen were often used to plow fields and pull farm implements for farmers who couldn’t afford a horse. These farmers usually supplemented their income by working in a nearby factory or shop.

During these four or five years of blacksmithery, Seeger could never suppress a desire to come to the United States and take up his trade in the “land of opportunity."

He got his chance in 1924, when relatives in this country sent word to Germany that they would like one of the kinfolk to come to America.

Seeger eagerly took the opportunity and sailed in November. His relatives were located in Ann Arbor and Boise, Idaho. He chose Ann Arbor as his home.

In 1925, Seeger went to work for John Volz, who, with his son, Alfred, operated a blacksmith and welding shop on S. Ashley St. across from Seeger's present location.

Fred worked there until 1939, when Volz & Son went out of business. Seeger then moved into his new quarters, and with his partner, went into business for himself.

Few Horses To Be Shod

Nowadays, the horseshoeing business is pretty sparse around Ann Arbor, but Seeger still nails a horseshoe on a horse occasionally.

Back in the “good old days,” there was plenty of activity around the forges when farmers, junk haulers and dairymen brought their horses in for a “shoe job.”

But horseshoeing by no means constituted all the blacksmithing to be done. People would come in with all manner of miscellaneous jobs, such as door hinges, chisels, lattice work, ornamental work—all done to the customers' specifications.

Seeger had acetylene equipment to work with in his first years at Volz’s but used a battery of three forges for his blacksmithing. The process itself is fairly routine, but requires lots of skill and knowledge of metallurgy.

Whatever is to be "smithed" is placed in the forge and is heated to the proper temperature, depending on the nature of the metal. When the metal is hot enough it is withdrawn, with tongs, and placed on the anvil to be pounded into shape.

Often it takes up to four or five heatings to forge the iron into the desired shape. Then, the hot metal is tempered either in water or oil; or, in some cases, it is allowed to cool slowly in air.

Horseshoes, once were fashioned in that manner, too.

Shoeing horses used to occupy about a third of Seeger’s time, but that business, naturally, began to decline as first the automobile and then the tractor replaced the horse and buggy and the farm horse.

Today, horseshoeing is almost a novelty to Seeger, though he still maintains his shoeing equipment.

Seeger had, meanwhile, mastered the welding trade, so was set to continue his business in this line.

Seeger's marriage was rather interesting: his wife, Agatha, was a neighbor of his back in Ebershardt, that is, within about ten miles. He had known her for several years before coming to this country.

She, too, had the opportunity to come to America and did so in October of 1925. They were reunited soon after and were married the next year. The Seegers have a daughter and two sons.

Despite the decline in blacksmithing business, Seeger is still glad he didn't become a butcher.

Blacksmithing is largely a lost art in this modern day and age, but Fred Seeger of 305 Pauline Blvd. still shoes a horse occasionally. Shown above he is working on a Golfside Stable horse which has come in for a “fitting.” Seeger has been blacksmithing for 30 years having come to this country from Germany in 1924. He now spends most of his time welding at his shop at 109 S. Ashley St.

When the gasoline engine replaced the horse and buggy on the streets and work horse in the fields, Blacksmith Fred Seeger of 305 Pauline Blvd. turned his efforts and skill to welding. Here he is shown concentrating on two steel plates which have been joined with molten iron, using his acetylene equipment. Seeger was employed by John Volz at his blacksmith and welding shop from 1925 to 1939 when he moved into his own store. Seeger was born in Wuerttemberg province, Germany.