Padgett Thanks Local Officers For Their Aid 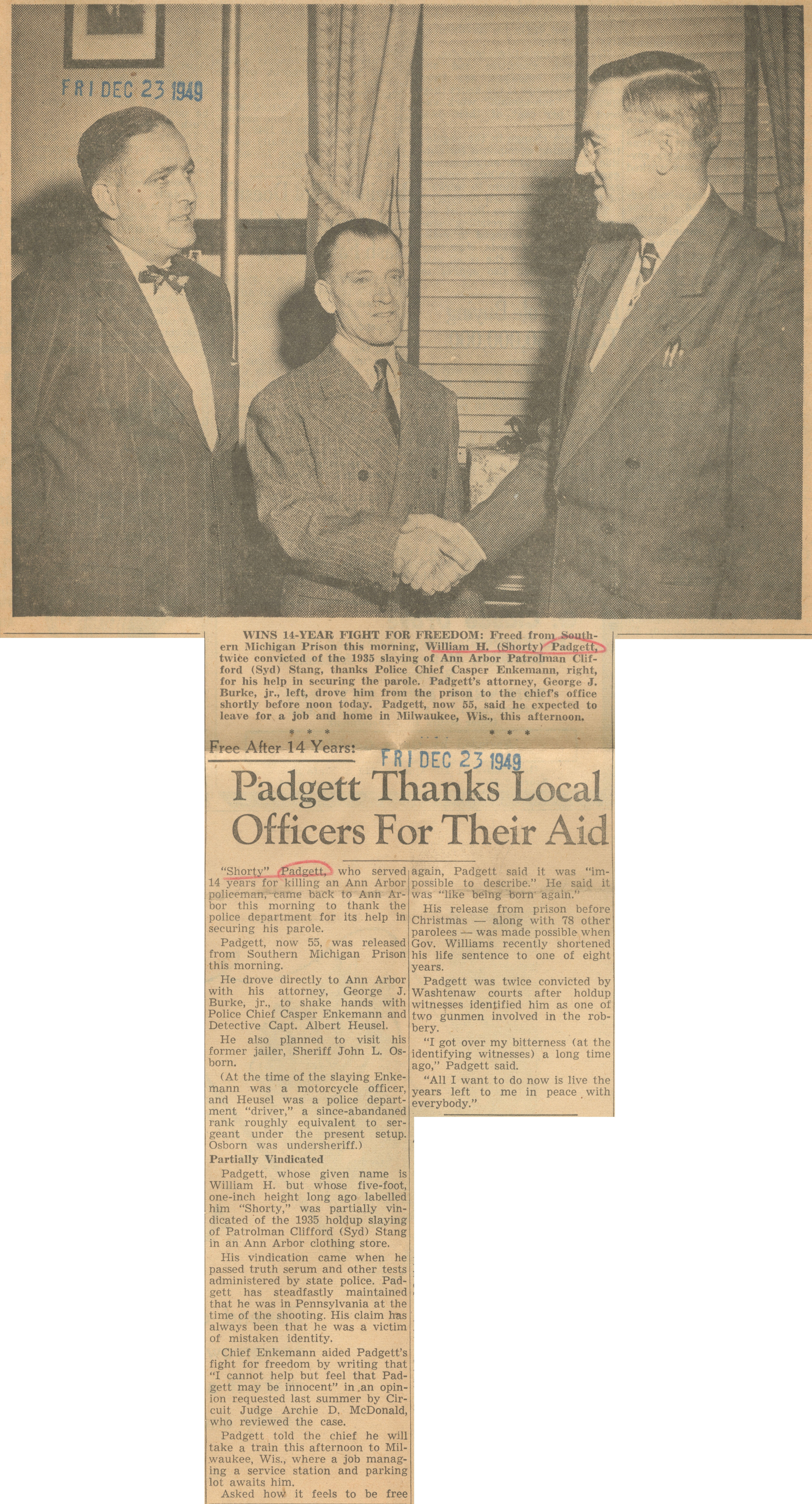 WINS 14-YEAR FIGHT FOR FREEDOM: Freed from Southern Michigan Prison this morning, William H. (Shorty) Padgett, twice convicted of the 1935 slaying of Ann Arbor Patrolman Clifford (Syd) Stang, thanks Police Chief Casper Enkemann, right, for his help in securing the parole. Padgett's attorney, George J. jr., left, drove him from the prison to the chief's office shortly before noon today. Padgett, now 55, said he expected to leave for a job and home in Milwaukee, Wis., this afternoon. Free After 14 Years: "Shorty" Padgett, who served 14 years for killing an Ann Arbor policeman, came back to Ann Arbor this morning to thank the police department for its help in securing his parole. Padgett, now 55, was released from Southern Michigan Prison this morning. He drove directly to Ann Arbor with his attorney, George J. Burke, jr., to shake hands with Police Chief Casper Enkemann and Detective Capt. Albert Heusel. He also planned to visit his former jailer, Sheriff John L. Osborn. (At the time of the slaying Enkemann was a motorcycle officer, and Heusel was a police department "driver," a since-abandaned rank roughly equivalent to sergeant under the present setup. Osborn was undersheriff.) Partially Vindicated Padgett, whose given name is William H. but whose five-foot, one-inch height long ago labelled him "Shorty," was partially vindicated of the 1935 holdup slaying of Patrolman Clifford (Syd) Stang in an Ann Arbor clothing store. His vindication came when he passed truth serum and other tests administered by state police. Padgett has steadfastly maintained that he was in Pennsylvania at the time of the shooting. His claim has always been that he was a victim of mistaken identity. Chief Enkemann aided Padgett's fight for freedom by writing that "I cannot help but feel that Padgett may be innocent" in an opinion requested last summer by Circuit Judge Archie D, McDonald, who reviewed the case. Padgett told the chief he will take a train this afternoon to Milwaukee, Wis., where a job managing a service station and parking lot awaits him. Asked how it feels to be free again, Padgett said it was "impossible to describe." He said it was "like being born again." His release from prison before Christmas - along with 78 other parolees -- was made possible when Gov. Williams recently shortened his life sentence to one of eight years. 1 Padgett was twice convicted by Washtenaw courts after holdup witnesses identified him as one of two gunmen involved in the robbery. "I got over my bitterness (at the identifying witnesses) a long time ago," Padgett said. "All I want to do now is live the years left to me in peace with everybody."