Frankly Old-Fashioned, Roundtable Has Become An Institution Over Half-Century 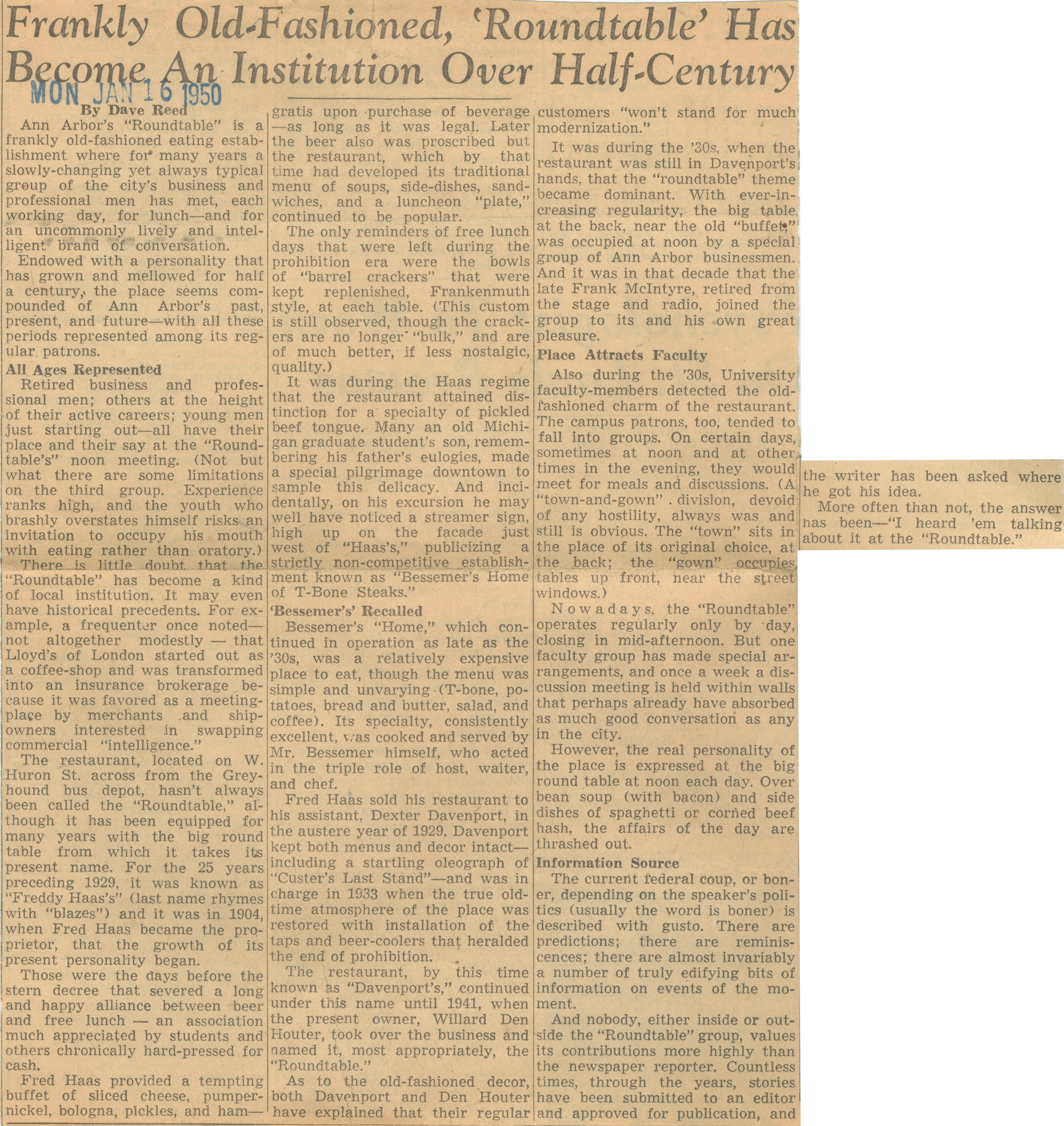 ﻿Frankly Old-Fashioned, 'Roundtable’ Has Become An Institution Over Half-Century

Ann Arbor's “Roundtable” frankly old-fashioned eating establishment where for many years a slowly-changing yet always typical group of the city's business and professional men has met, each working day, for lunch—and for an uncommonly lively and intelligent brand of conversation.

Endowed with a personality that has grown and mellowed for half a century, the place seems compounded of Ann Arbor's past, present, and future—with all these periods represented among its regular patrons.

Retired business and professional men; others at the height of their active careers; young men just starting out—all have their place and their say at the “Roundtable’s” noon meeting. (Not but what there are some limitations on the third group. Experience ranks high, and the youth who brashly overstates himself risks an invitation to occupy his mouth with eating rather than oratory.)

“Roundtable” has become a kind of local institution. It may even have historical precedents. For example, a frequenter once noted— not altogether modestly — that Lloyd's of London started out as a coffee-shop and was transformed into an insurance brokerage because it was favored as a meeting-place by merchants and shipowners interested in swapping commercial "intelligence.”

The restaurant, located on W Huron St. across from the Greyhound bus depot, hasn’t always been called the "Roundtable," although it has been equipped for many years with the big round table from which it takes its present name. For the 25 years preceding 1929, it was known as “Freddy Haas’s” (last name rhymes with “blazes”) and it was in 1904, when Fred Haas became the proprietor, that the growth of its present personality began.

Those were the days before the stern decree that severed a long and happy alliance between beer and free lunch — an association much appreciated by students and others chronically hard-pressed for cash.

Fred Haas provided a tempting buffet of sliced cheese, pumpernickel, bologna, pickles, and ham – gratis upon purchase of beverage —as long as it was legal. Later the beer also was proscribed but the restaurant, which by that time had developed its traditional menu of soups, side-dishes, sandwiches, and a luncheon “plate," continued to be popular.

The only reminders of free lunch days that were left during the prohibition era were the bowls of “barrel crackers” that were kept replenished, Frankenmuth style, at each table. (This custom is still observed, though the crackers are no longer “bulk,” and are of much better, if less nostalgic, quality.)

It was during the Haas regime that the restaurant attained distinction for a specialty of pickled beef tongue. Many an old Michigan graduate student’s son, remembering his father’s eulogies, made a special pilgrimage downtown to sample this delicacy. And incidentally, on his excursion he may well have noticed a streamer sign, high up on the facade just west of “Haas’s,” publicizing a strictly non-competitive establishment known as “Bessemer’s Home of T-Bone Steaks.”

Bessemer’s “Home,” which continued in operation as late as the '30s, was a relatively expensive place to eat, though the menu was simple and unvarying (T-bone, potatoes, bread and butter, salad, and coffee). Its specialty, consistently excellent, was cooked and served by Mr. Bessemer himself, who acted the triple role of host, waiter, and chef.

Fred Haas sold his restaurant to his assistant, Dexter Davenport, in the austere year of 1929. Davenport kept both menus and decor intact— including a startling oleograph of “Custer's Last Stand”—and was in charge in 1933 when the true old-atmosphere of the place was restored with installation of the taps and beer-coolers that heralded the end of prohibition.

The restaurant, by this time known as “Davenport’s,” continued under this name until 1941, when the present owner, Willard Den Houter, took over the business and named it, most appropriately, the “Roundtable.”

As to the old-fashioned decor, both Davenport and Den Houter have explained that their regular “won’t stand for much modernization.”

It was during the ‘30s, when the restaurant was still in Davenport’s hands, that the “roundtable” theme became dominant. With ever-increasing regularity, the big table at the back, near the old “buffet,’’ was occupied at noon by a special group of Ann Arbor businessmen. And it was in that decade that the late Frank McIntyre, retired from the stage and radio, joined the group to its and his own great pleasure.

Also during the ’30s, University faculty-members detected the old-fashioned charm of the restaurant. The campus patrons, too, tended to fall into groups. On certain days, sometimes at noon and at other times in the evening, they would meet for meals and discussions. (A “town-and-gown” division, devoid of any hostility, always was and still is obvious. The “town” sits in the place of its original choice, at the back; the “gown" occupies tables up front, near the street windows.)

Nowadays, the “Roundtable operates regularly only by day, closing in mid-afternoon. But one faculty group has made special arrangements, and once a week a discussion meeting is held within walls that perhaps already have absorbed as much good conversation as any in the city.

However, the real personality of the place is expressed at the big round table at noon each day. Over bean soup (with bacon) and side dishes of spaghetti or corned beef hash, the affairs of the day are thrashed out.

The current federal coup, or boner, depending on the speaker’s politics (usually the word is boner) is described with gusto. There are predictions; there are reminiscences; there are almost invariably a number of truly edifying bits of information on events of the moment.

And nobody, either inside or outside the "Roundtable” group, values its contributions more highly than the newspaper reporter. Countless times, through the years, stories have been submitted to an editor and approved for publication, and the writer has been asked where he got his idea.

More often than not, the answer has been – “I heard ‘em talking about it at the “Roundtable.”