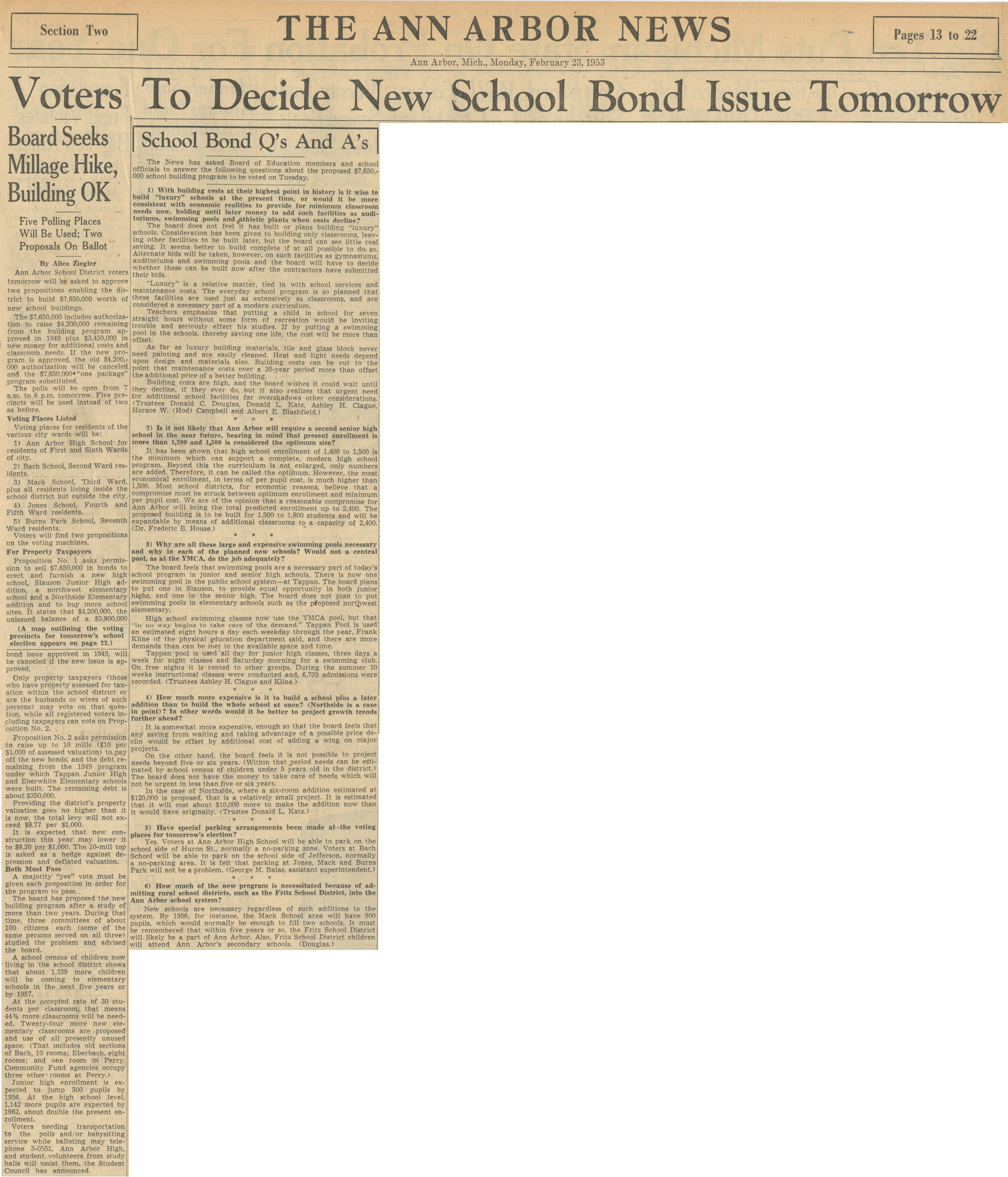 Five Polling Places Will Be Used; Two Proposals On Ballot

Ann Arbor School District voters tomorrow will be asked to approve two propositions enabling the district to build $7,650,000 worth of new school buildings.

The polls will be open from 7 a.m. to 8 p.m. tomorrow. Five precincts will be used instead of two as before.

Voting places for residents of the various city wards will be:

1) Ann Arbor High School for residents of First and Sixth Wards of city.

3) Mack School, Third Ward, plus all residents living inside the school district but outside the city.

Voters will find two propositions on the voting machines.

Proposition No. 1 asks permission to sell $7,650,000 in bonds to erect and furnish a new high school, Slauson Junior High addition, a northwest elementary school and a Northside Elementary addition and to buy more school sites. It states that $4,200,000, the unissued balance of a $5,800,000 (A map outlining the voting precincts for tomorrow's school election appears on page 22.) bond issue approved in 1949, will be canceled if the new issue is approved.

Only property taxpayers (those who have property assessed for taxation within the school district or are the husbands or wives of such persons) may vote on that question, while all registered voters including taxpayers can vote on Proposition No. 2.

Proposition No. 2 asks permission to raise up to 10 mills ($10 per $1,000 of assessed valuation) to pay off the new bonds, and the debt remaining from the 1949 program under which Tappan Junior High and Eberwhite Elementary schools were built. The remaining debt is about $350,000.

Providing the district’s property valuation goes no higher than it is now, the total levy will not exceed $8.77 per $1,000.

It is expected that new construction this year may lower it to $8.20 per $1,000. The 10-mill top is asked as a hedge against depression and deflated valuation.

A majority "yes" vote must be given each proposition in order for the program to pass.

The board has proposed the new building program after a study of more than two years. During that time, three committees of about 100 citizens each (some of the same persons served on all three) studied the problem and advised the board.

A school census of children now living in the school district shows that about 1,339 more children will be coming to elementary schools in the next five years or by 1957.

At the accepted rate of 30 students per classroom, that means 44⅔ more classrooms will be needed. Twenty-four more new elementary classrooms are proposed and use of all presently unused space. (That includes old sections of Bach, 10 rooms; Eberbach, eight rooms; and one room in Perry. Community Fund agencies occupy three other rooms at Perry.)

Junior high enrollment is expected to jump 500 pupils by 1956. At the high school level, 1,142 more pupils are expected by 1962, about double the present enrollment

Voters needing transportation to the polls and/or babysitting service while balloting may telephone 3-0551, Ann Arbor High, and student volunteers from study halls will assist them, the Student Council has announced.

The News has asked Board of Education members and school officials to answer the following questions about the proposed $7,650,000 school building program to be voted on Tuesday.

1) With building costs at their highest point in history is it wise to build “luxury” schools at the present time, or would it be more consistent with economic realities to provide for minimum classroom needs now, holding until later money to add such facilities as auditoriums, swimming pools and athletic plants when costs decline?

The board does not feel it has built or plans building "luxury” schools. Consideration has been given to building only classrooms, leaving other facilities to be built later, but the board can see little real saving. It seems better to build complete if at all possible to do so. Alternate bids will be taken, however, on such facilities as gymnasiums, auditoriums and swimming pools and the board will have to decide whether these can be built now after the contractors have submitted their bids.

"Luxury” is a relative matter, tied in with school services and maintenance costs. The everyday school program is so planned that these facilities are used just as extensively as classrooms, and considered a necessary part of a modern curriculum.

Teachers emphasize that putting a child in school for seven straight hours without some form of recreation would be inviting trouble and seriously effect his studies. If by putting a swimming pool in the schools, thereby saving one life, the cost will be more than offset.

As far as luxury building materials, tile and glass block never need painting and are easily cleaned. Heat and light needs depend upon design and materials also. Building costs can be cut to the point that maintenance costs over a 20-year period more than offset the additional price of a better building.

Building costs are high, and the board wishes it could wait until they decline, if they ever do, but it also realizes that urgent need for additional school facilities far overshadows other considerations. (Trustees Donald C. Douglas, Donald L. Katz, Ashley H. Clague, Horace W. (Hod) Campbell and Albert E. Blashfield.)

2) Is it not likely that Ann Arbor will require a second senior high school in the near future, bearing in mind that present enrollment is more than 1,200 and 1,500 is considered the optimum size?

It has been shown that high school enrollment of 1,400 to 1,500 is the minimum which can support a complete, modern high school program. Beyond this the curriculum is not enlarged, only numbers are added. Therefore, it can be called the optimum. However, the most economical enrollment, in terms of per pupil cost, is much higher than 1,500. Most school districts, for economic reasons, believe that a compromise must be struck between optimum enrollment and minimum per pupil cost. We are of the opinion that a reasonable compromise for Ann Arbor will bring the total predicted enrollment up to 2,400. The proposed building is to be built for 1,500 to 1,800 students and will be expandable by means of additional classrooms to a capacity of 2,400. (Dr. Frederic B. House.)

3) Why are all these large and expensive swimming pools necessary and why in each of the planned new schools? Would not a central pool, as at the YMCA, do the job adequately?

The board feels that swimming pools are a necessary part of today’s school program in junior and senior high schools. There is now one swimming pool in the public school system—at Tappan. The board plans to put one in Slauson, to provide equal opportunity in both junior highs, and one in the senior high. The board does not plan to put swimming pools in elementary schools such as the proposed northwest elementary.

High school swimming classes now use the YMCA pool, but that "in no way begins to take care of the demand.” Tappan Pool is used an estimated eight hours a day each weekday through the year, Frank Kline of the physical education department said, and there are more demands than can be met in the available space and time.

Tappan pool is used all day for junior high classes, three days a week for night classes and Saturday morning for a swimming club. On free nights it is rented to other groups. During the summer 10 weeks instructional classes were conducted and 6,709 admissions were recorded. (Trustees Ashley H. Clague and Kline.)

4) How much more expensive is it to build a school plus a later addition than to build the whole school at once? (Northside is a case in point)? In other words would it be better to project growth trends further ahead?

It is somewhat more expensive, enough so that the board feels that any saving from waiting and taking advantage of a possible price declin would be offset by additional cost of adding a wing on major projects.

On the other hand, the board feels it is not possible to project needs beyond five or six years. (Within that period needs can be estimated by school census of children under 5 years old in the district.) The board does not have the money to take care of needs which will not be urgent in less than five or six years.

In the case of Northside, where a six-room addition estimated at $120,000 is proposed, that is a relatively small project. It is estimated that it will cost about $10,000 more to make the addition now than it would have originally. (Trustee Donald L. Katz.)

5) Have special parking arrangements been made at the voting places for tomorrow’s election?

6) How much of the new program is necessitated because of admitting rural school districts, such as the Fritz School District, into the Ann Arbor school system?

New schools are necessary regardless of such additions to the system. By 1956, for instance, the Mack School area will have 900 pupils, which would normally be enough to fill two schools. It must be remembered that within five years or so. the Fritz School District will likely be a part of Ann Arbor. Also, Fritz School District children will attend Ann Arbor's secondary schools. (Douglas.)