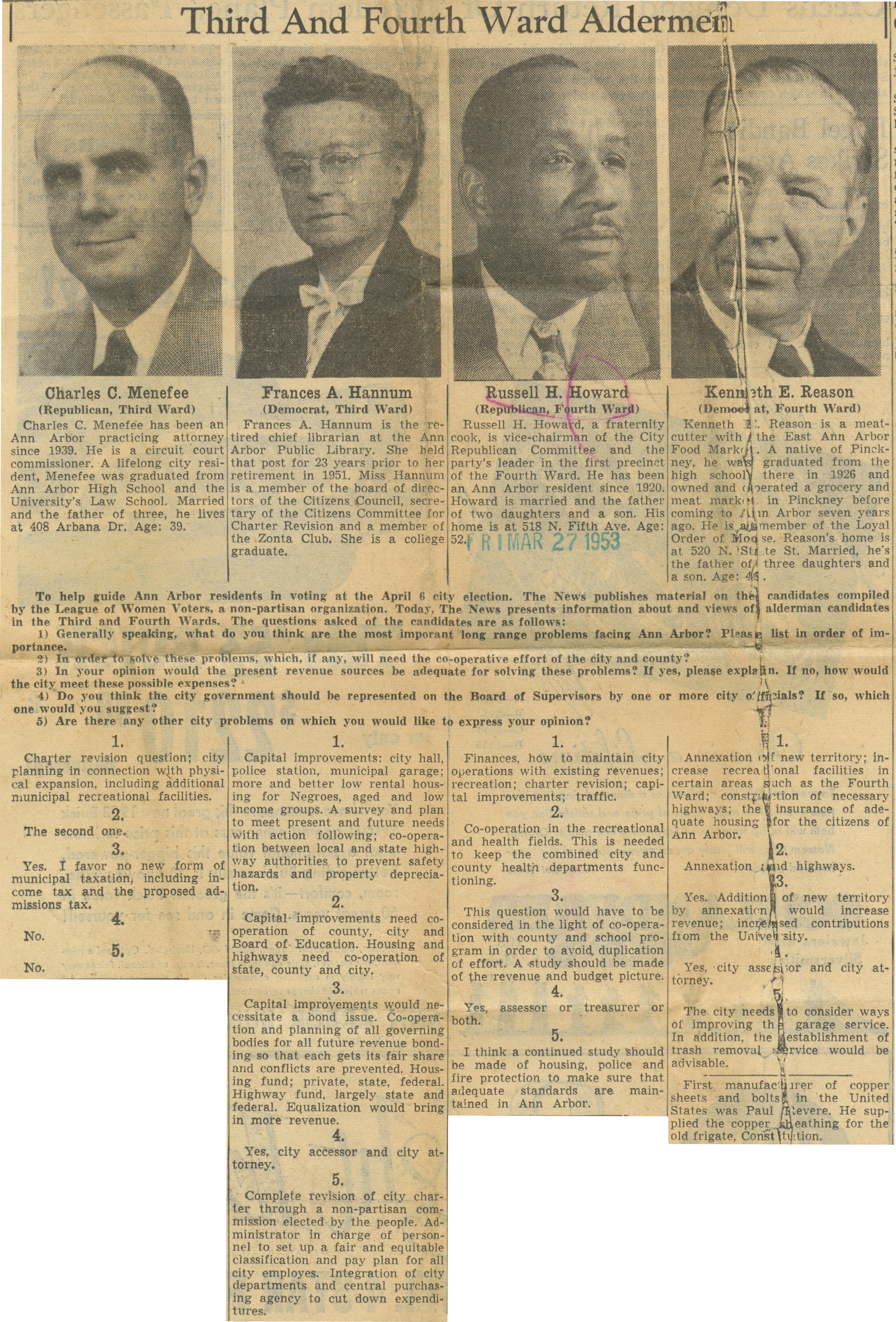 To help guide Ann Arbor residents in voting at the April 6 city election. The News publishes material on the candidates compiled by the League of Women Voters, a non-partisan organization. Today, the News presents information about and views of alderman candidates in the Third and Fourth Wards. The questions asked of the candidates are as follows:

1) Generally speaking, what do you think are the most important long range problems facing Ann Arbor? Please list in order of importance.

2) In order to solve these problems, which, if any, will need the co-operative effort of the city and county?

3) In your opinion would the present revenue sources be adequate for solving these problems? If yes, please explain. If no, how would the city meet these possible expenses?

4) Do you think the city government should be represented on the Board of Supervisors by one or more city officials? If so, which one would you suggest?

5) Are there any other city problems on which you would like to express your opinion?

Charles C. Menefee has been Ann Arbor practicing attorney since 1939. He is a circuit court commissioner. A lifelong city resident, Menefee was graduated from Ann Arbor High School and the University's Law School. Married and the father of three, he lives at 408 Arbana Dr. Age: 39.

Yes. I favor no new form of municipal taxation, including income tax and the proposed admissions tax.

Capital improvements would necessitate a bond issue. Co-operation and planning of all governing bodies for all future revenue bonding so that each gets its fair share and conflicts are prevented. Housing fund; private, state, federal. Highway fund, largely state and federal. Equalization would bring in more revenue.

Complete revision of city charter through a non-partisan commission elected by the people. Administrator in charge of personnel to set up a fair and equitable classification and pay plan for all city employees. Integration of city departments and central purchasing agency to cut down expenditures.

Russell H. Howard, a fraternity cook, is vice-chairman of the City Republican Committee and the party's leader in the first precinct of the Fourth Ward. He has been an Ann Arbor resident since 1920. Howard is married and the father of two daughters and a son. His home is at 518 N. Fifth Ave. Age: 52

Co-operation in the recreational and health fields. This is needed to keep the combined city and county health departments functioning.

This question would have to be considered in the light of co-operation with county and school program in order to avoid duplication of effort. A study should be made of the revenue and budget picture.

Yes, assessor or treasurer or both.

I think a continued study should be made of housing, police and fire protection to make sure that adequate standards are maintained in Ann Arbor.

Kenneth E. Reason is a meat-cutter with the East Ann Arbor Food Market. A native of Pinckney, he was graduated from the high school there in 1926 and owned and operated a grocery and meat market in Pinckney before coming to Ann Arbor seven years ago. He is a member of the Loyal Order of Moose. Reason’s home is at 520 N. State St. Married, he's the father of three daughters and a son. Age: 46

Annexation of new territory; increase recreational facilities in certain areas such as the Fourth Ward; construction of necessary highways; the insurance of adequate housing for the citizens of Arbor.

Yes. Addition of new territory  by annexation would increase revenue; increased contributions from the University.

The city needs to consider ways of improving the garage service. In addition, the establishment of trash removal service would be advisable.

First manufacturer of copper sheets and bolts in the United States was Paul Revere. He supplied the copper sheathing for the old frigate, Constitution.