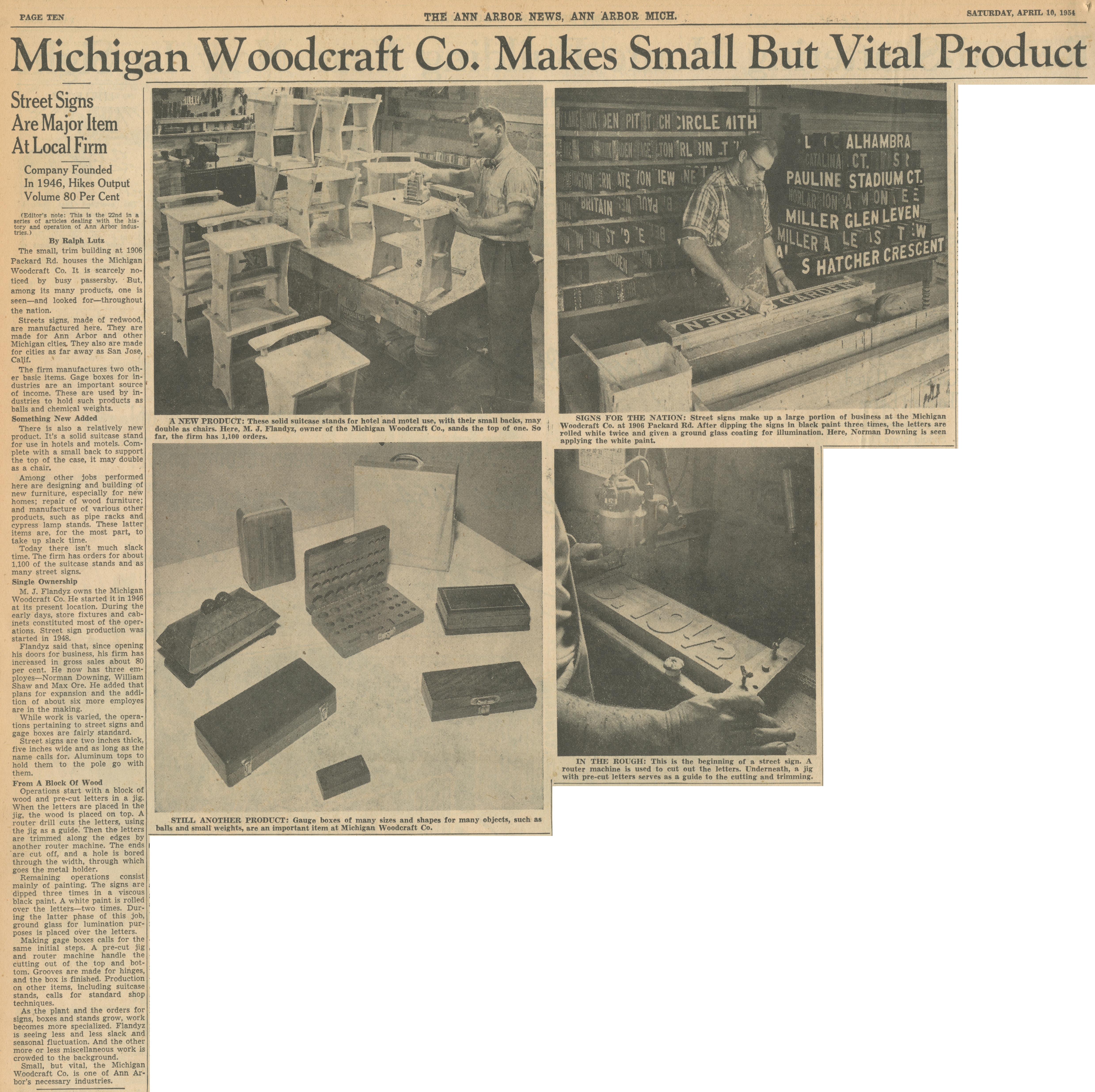 Street Signs Are Major Item At Local Firm
Company Founded In 1946, Hikes Output Volume 80 Per Cent
(Editor's note: This is the 22nd in a series of articles dealing with the history and operation of Ann Arbor industries."
By Ralph Lutz
The small, trim building at 1906 Packard Rd. houses the Michigan Woodcraft Co. It is scarcely noticed by busy passersby. But, among its many products, one is seen - and looked for - throughout the nation.
Street signs, made of redwood, are manufactured here. They are made for Ann Arbor and other Michigan cities. They also are made for cities as far away as San Jose, Calif.
The firm manufactures two other basic items. Gage boxes for industries are an important source of income. These are used by industries to hold such products as balls and chemical weights.
Something New Added
There is also a relatively new product. It's a solid suitcase stand for use in hotels and motels. Complete with a small back to support the top of the case, it may double as a chair.
Among other jobs performed here are designing and building of new furniture, especially for new homes; repair of wood furniture; and manufacture of various other products, such as pipe racks and cypress lamp stands. These latter items are, for the most part, to take up slack time.
Today there isn't much slack time. The firm has orders for about 1,100 of the suitcase stands and as many street signs.
Single Ownership
M. J. Flandyz owns the Michigan Woodcraft Co. He started it in 1946 at its present location. During the early days, store fixtures and cabinets constituted most of the operations. Street sign production was started in 1948.
Flandyz said that, since opening his doors for business, his firm has increased in gross sales about 80 per cent. He now has three employes - Norman Downing, William Shaw and Max Ore. He added that plans for expansion and the addition of about six more employes are in the making.
While work is varied, the operations pertaining to street signs and gage boxes are fairly standard.
Street signs are two inches thick, five inches wide and as long as the name calls for. Aluminum tops to hold them to the pole go with them.
From A Block Of Wood
Operations start with a block of wood and pre-cut letters in a jig. When the letters are placed in the jig, the wood is placed on top. A router drill cuts the letters, using the jig as a guide. Then the letters are trimmed along the edges by another router machine. The ends are cut off, and a hole is bored through the width, through which goes the metal holder.
Remaining operations consist mainly of painting. The signs are dipped three times in a viscous black paint. A white paint is rolled over the letters - two times. During the latter phase of this job, ground glass for lumination purposes is placed over the letters.
Making gage boxes calls for the same initial steps. A pre-cut jig and router machine handle the cutting out of the top and bottom. Grooves are made for hinges, and the box is finished. Production on other items, including suitcase stands, calls for standard shop techniques.
As the plant and the orders for signs, boxes and stands grow, work becomes more specialized. Flandyz is seeing less and less slack and seasonal fluctuation. And the other more or less miscellaneous work is crowded to the background.
Small, but vital, the Michigan Woodcraft Co. is one of Ann Arbor's necessary industries.