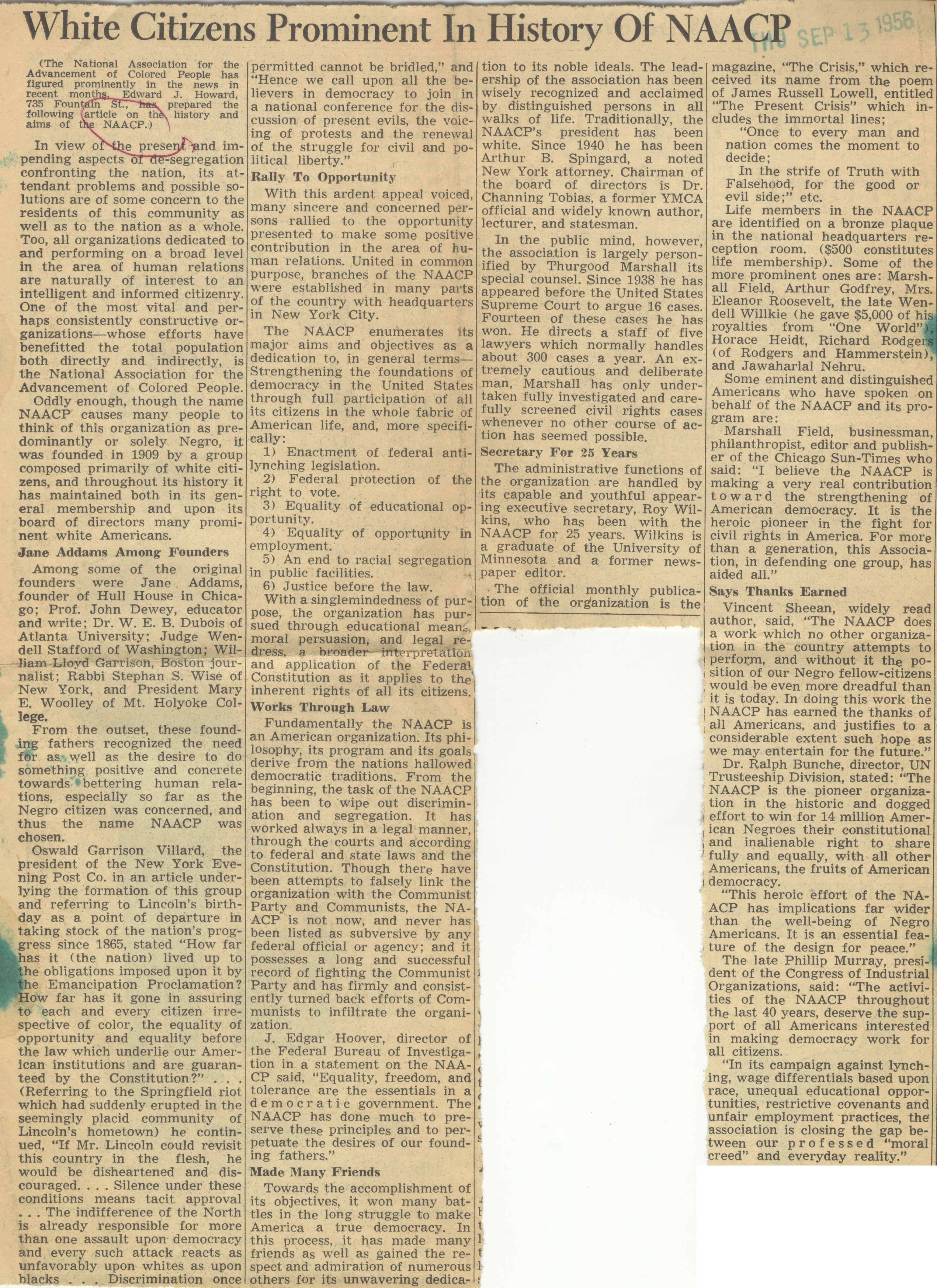 (The National Association for the Advancement of Colored People has figured prominently in the news in recent months. Edward J. Howard, 735 Fountain St., has prepared the following article on the history and aims of the NAACP.)

In view of the present and impending aspects of de-segregation confronting the nation, its attendant problems and possible solutions are of some concern to the residents of this community as well as to the nation as a whole. Too, all organizations dedicated to and performing on a broad level in the area of human relations are naturally of interest to an intelligent and informed citizenry. One of the most vital and perhaps consistently constructive organizations--whose efforts have benefitted the total population both directly and indirectly, is the National Association for the Advancement of Colored People.

Oddly enough, though the name NAACP causes many people to think of this organization as predominantly or solely Negro, it was founded in 1909 by a group composed primarily of white citizens, and throughout its history it has maintained both in its general membership and upon its board of directors many prominent white Americans.

From the outset, these founding fathers recognized the need for as well as the desire to do something positive and concrete towards bettering human relations, especially so far as the Negro citizen was concerned, and thus the name NAACP was chosen.

Oswald Garrison Villard, the president of the New York Evening Post Co. in an article underlying the formation of this group and referring to Lincoln's birthday as a point of departure in taking stock of the nation's progress since 1865, stated "How far has it (the nation) lived up to the obligations imposed upon it by the Emancipation Proclamation? How far has it gone in assuring to each and every citizen irrespective of color, the equality of opportunity and equality before the law which underlie our American institutions and are guaranteed by the Constitution?"...(Referring to the Springfield riot which had suddenly erupted in the seemingly placid community of Lincoln's hometown: he continued, "If Mr. Lincoln could revisit this country in the flesh, he would be disheartened and discouraged....Silence under these conditions means tacit approval...The indifference of the North is already responsible for more than one assault upon democracy and every such attack reacts as unfavorably upon whites as upon blacks...Discrimination once permitted cannot be bridled," and "Hence we call upon all the believers in democracy to join in a national conference for the discussion of present evils, the voicing of protests and the renewal of the struggle for civil and political liberty."

With this ardent appeal voiced, many sincere and concerned persons rallied to the opportunity presented to make some positive contribution in the area of human relations. United in common purpose, branches of the NAACP were established in many parts of the country with headquarters in New York City.

The NAACP enumerates its major aims and objectives as a dedication to, in general terms—Strengthening the foundations of democracy in the United States through full participation of all its citizens in the whole fabric of American life, and, more specifically :

2) Federal protection of the right to vote.

4) Equality of opportunity in employment.

5) An end to racial segregation in public facilities.

6) Justice before the law.

With a singlemindedness of purpose, the organization has pursued through educational means, moral persuasion, and legal redress. a broader interpretation and application of the Federal Constitution as it applies to the inherent rights of all its citizens.

Fundamentally the NAACP is an American organization. Its philosophy, its program and its goals derive from the nations hallowed democratic traditions. From the beginning, the task of the NAACP has been to wipe out discrimination and segregation. It has worked always in a legal manner, through the courts and according to federal and state laws and the Constitution. Though there have been attempts to falsely link the organization with the Communist Party and Communists, the NAACP is not now, and never has been listed as subversive by any federal official or agency; and it possesses a long and successful record of fighting the Communist Party and has firmly and consistently turned back efforts of Communists to infiltrate the organization.

J. Edgar Hoover, director of the Federal Bureau of Investigation in a statement on the NAACP said, "Equality, freedom, and tolerance are the essentials in a democratic government. The NAACP has done much to preserve these principles and to perpetuate the desires of our founding fathers."

Towards the accomplishment of its objectives, it won many battles in the long struggle to make America a true democracy. In this process, it has made many friends as well as gained the respect and admiration of numerous others for its unwavering dedication to its noble ideals. The leadership of the association has been wisely recognized and acclaimed by distinguished persons in all walks of life. Traditionally, the NAACP’s president has been white. Since 1940 he has been Arthur B. Spingard, a noted New York attorney. Chairman of the board of directors is Dr. Channing Tobias, a former YMCA official and widely known author, lecturer, and statesman.

In the public mind, however, the association is largely personified by Thurgood Marshall its special counsel. Since 1938 he has appeared before the United States Supreme Court to argue 16 cases. Fourteen of these cases he has won. He directs a staff of five lawyers which normally handles about 300 cases a year. An extremely cautious and deliberate man, Marshall has only undertaken fully investigated and carefully screened civil rights cases whenever no other course of action has seemed possible.

The administrative functions of the organization are handled by its capable and youthful appearing executive secretary, Roy Wilkins, who has been with the NAACP for 25 years. Wilkins is a graduate of the University of Minnesota and a former newspaper editor.

The official monthly publication of the organization is the magazine, "The Crisis,” which received its name from the poem of James Russell Lowell, entitled "The Present Crisis” which includes the immortal lines;

"Once to every man and nation comes the moment to decide;

In the strife of Truth with Falsehood, for the good or evil side;” etc.

Life members in the NAACP are identified on a bronze plaque in the national headquarters reception room. ($500 constitutes life membership). Some of the more prominent ones are: Marshall Field, Arthur Godfrey, Mrs. Eleanor Roosevelt, the late Wendell Willkie (he gave $5,000 of his royalties from “One World”), Horace Heidt, Richard Rodgers (of Rodgers and Hammerstein); and Jawaharlal Nehru.

Some eminent and distinguished Americans who have spoken on behalf of the NAACP and its program are:

Marshall Field, businessman, philanthropist, editor and publisher of the Chicago Sun-Times who said: “I believe the NAACP is making a very real contribution toward the strengthening of American democracy. It is the heroic pioneer in the fight for civil rights in America. For more than a generation, this Association, in defending one group, has aided all.”

Vincent Sheean, widely read author, said, "The NAACP does a work which no other organization in the country attempts to perform, and without it the position of our Negro fellow-citizens would be even more dreadful than it is today. In doing this work the NAACP has earned the thanks of all Americans, and justifies to a considerable extent such hope as we may entertain for the future."

Dr. Ralph Bunche, director, UN Trusteeship Division, stated: “The NAACP is the pioneer organization in the historic and dogged effort to win for 14 million American Negroes their constitutional and inalienable right to share fully and equally, with all other Americans, the fruits of American democracy.

“This heroic effort of the NAACP has implications far wider than the well-being of Negro Americans. It is an essential feature of the design for peace.”

The late Phillip Murray, president of the Congress of Industrial Organizations, said: “The activities of the NAACP throughout the last 40 years, deserve the support of all Americans interested in making democracy work for all citizens."

"In its campaign against lynching, wage differentials based upon race, unequal educational opportunities, restrictive covenants and unfair employment practices, the association is closing the gap between our professed “moral creed” and everyday reality."