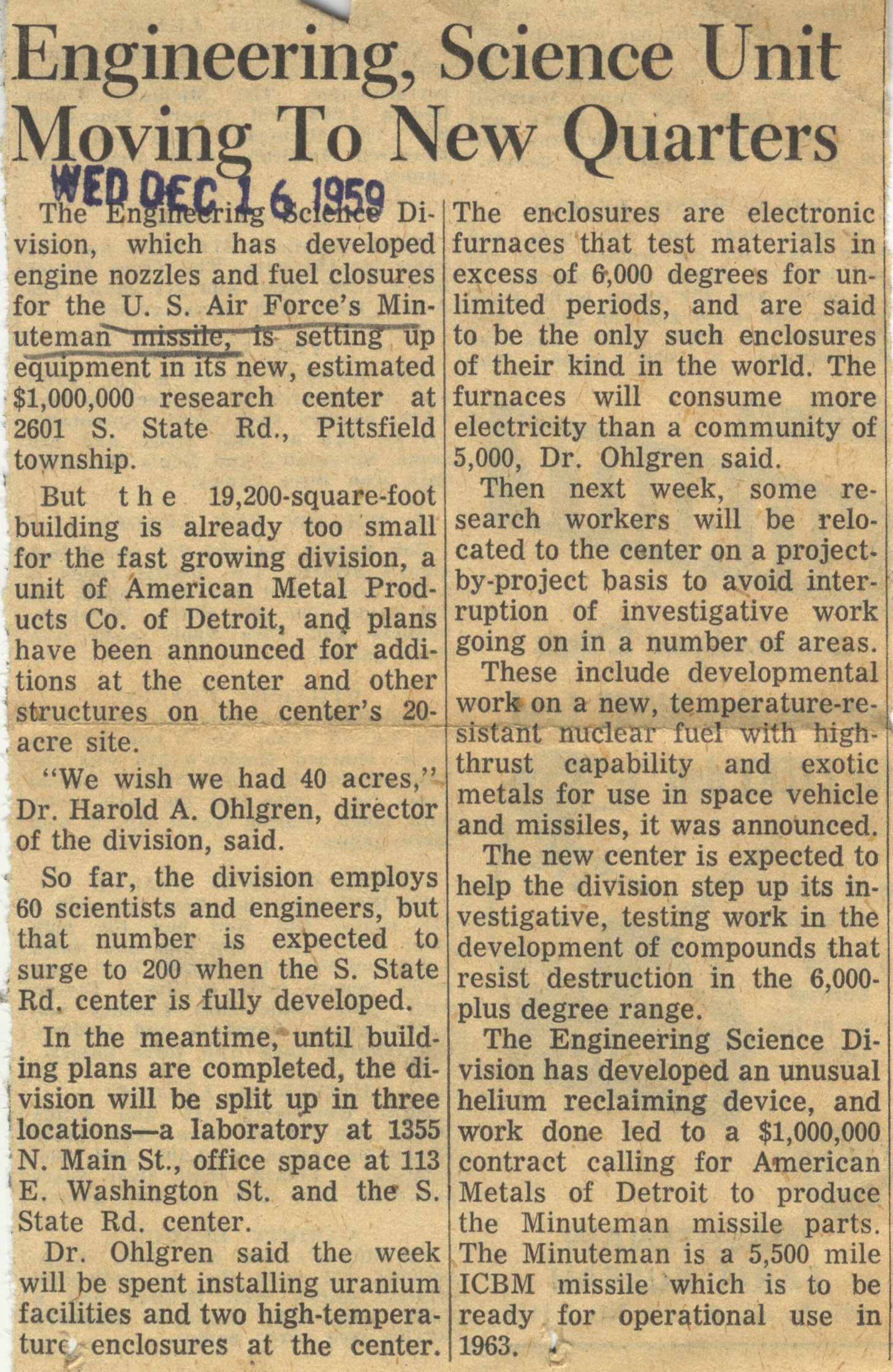 The Engineering Science Division, which has developed engine nozzles and fuel closures for the U.S. Air Force’s Minuteman missiles, is setting up equipment in its new, estimated $1,000,000 research center at 2601 S. State Rd., Pittsfield township.

But the 19,200-square-foot building is already too small for the fast growing division, a unit of American Metal Products Co. of Detroit, and plans have been announced for additions at the center and other structures on the center’s 20 acre site.

“We wish we had 40 acres,” Dr. Harold A. Ohlgren, director of the division, said.

So far, the division employs 60 scientists and engineers, but that number is expected to surge to 200 when the S. State Rd. center is fully developed.

In the meantime, until building plans are completed, the division will be split up in three locations—a laboratory at 1355 N. Main St., office space at 113 E. Washington St. and the S. State Rd. center.

Dr. Ohlgren said the week will be spent installing uranium facilities and two high-temperature enclosures at the center.

The enclosures are electronic furnaces that test materials in excess of 6,000 degrees for unlimited periods, and are said to be the only such enclosures of their kind in the world. The furnaces will consume more electricity than a community of 5,000, Dr. Ohlgren said.

Then next week, some research workers will be relocated to the center on a project-by-project basis to avoid interruption of investigative work going on in a number of areas.

These include developmental work on a new, temperature-resistant nuclear fuel with high-thrust capability and exotic metals for use in space vehicle and missiles, it was announced.

The new center is expected to help the division step up its investigative, testing work in the development of compounds that resist destruction in the 6,000 plus degree range.

The Engineering Science Division has developed an unusual helium reclaiming device, and work done led to a $1,000,000 contract calling for American Metals of Detroit to produce the Minuteman missile parts. The Minuteman is a 5,500 mile ICBM missile which is to be ready for operational use in 1963.