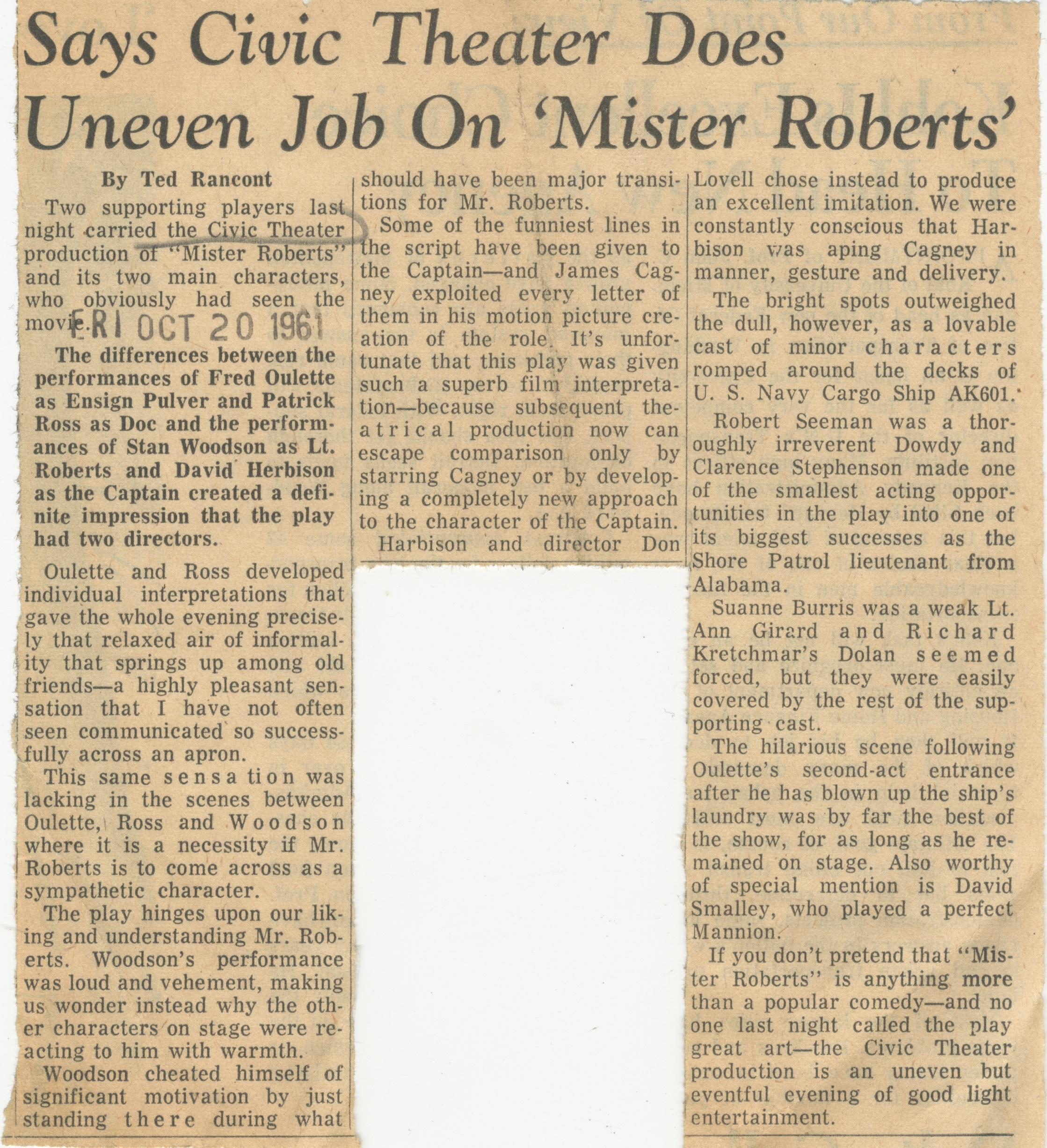 Oulette and Ross developed individual interpretations that gave the whole evening precisely that relaxed air of informality that springs up among old friends—a highly pleasant sensation that I have not often seen communicated so successfully across an apron.

This same sensation was lacking in the scenes between Oulette, Ross and Woodson .where it is a necessity if Mr. Roberts is to come across as a sympathetic character.

The play hinges upon our liking and understanding Mr. Roberts. Woodson’s performance was loud and vehement, making us wonder instead why the other characters on stage were reacting to him with warmth.

Woodson cheated himself of significant motivation by just standing there during what should have been major transitions for Mr. Roberts.

Some of the funniest lines in Ihe script have been given to the Captain—and James Cagney exploited every letter of them in his motion picture creation of the role, It’s unfortunate that this play was given such a superb film interpretation—because subsequent theatrical production now can escape comparison only by starring Cagney or by developing a completely new approach to the character of the Captain.

Harbison and director Don Lovell chose instead to produce an excellent imitation. We were constantly conscious that Harbison was aping Cagney in manner, gesture and delivery.

The bright spots outweighed the dull, however, as a lovable cast of minor characters romped around the decks of U. S. Navy Cargo Ship AK601.

Robert Seeman was a thoroughly irreverent Dowdy and Clarence Stephenson made one of the smallest acting opportunities in the play into one of its biggest successes as the .Shore Patrol lieutenant from Alabama.

Suanne Burris was a weak Lt. Ann Girard and Richard Kretchmar’s Dolan seemed forced, but they were easily covered by the rest of the supporting cast.

The hilarious scene following Oulette’s second-act entrance after he has blown up the ship's laundry was by far the best of the show, for as long as he remained on stage. Also worthy of special mention is David Smalley, who played a perfect Mannion.

If you don’t pretend that “Mister Roberts” is anything more than a popular comedy—and no one last night called the play great art—the Civic Theater production is an uneven but eventful evening of good light entertainment.