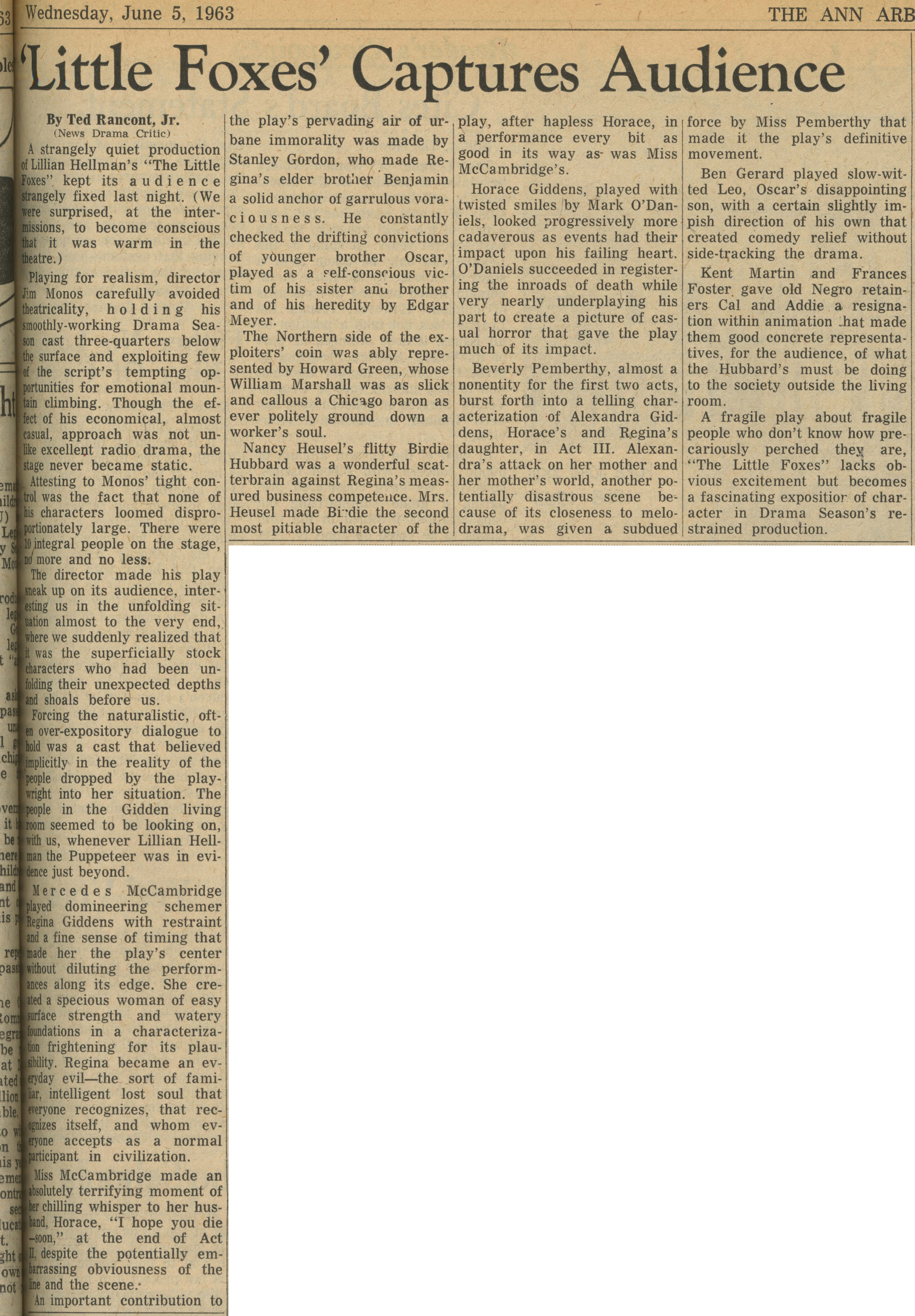 A strangely quiet production of Lillian Hellman’s “The Little Foxes” kept its audience strangely fixed last night. (We were surprised, at the intermissions, to become conscious that it was warm in the theatre.)

Playing for realism, director Jim Monos carefully avoided theatricality, holding his smoothly-working Drama Season cast three-quarters below the surface and exploiting few of the script’s tempting opportunities for emotional mountain climbing. Though the effect of his economical, almost casual, approach was not unlike excellent radio drama, the stage never became static.

Attesting to Monos’ tight control was the fact that none of his characters loomed disproportionately large. There were 10 integral people on the stage, no more and no less.

The director made his play sneak up on its audience, interesting us in the unfolding situation almost to the very end, where we suddenly realized that it was the superficially stock characters who had been unfolding their unexpected depths and shoals before us.

Forcing the naturalistic, often over-expository dialogue to hold was a cast that believed implicitly in the reality of the people dropped by the playwright into her situation. The people in the Gidden living room seemed to be looking on, with us, whenever Lillian Hellman the Puppeteer was in evidence just beyond.

Mercedes McCambridge played domineering schemer Regina Giddens with restraint and a fine sense of timing that made her the play’s center without diluting the performances along its edge. She created a specious woman of easy surface strength and watery foundations in a characterization frightening for its plausibility. Regina became an everyday evil—the sort of familiar, intelligent lost soul that everyone recognizes, that recognizes itself, and whom everyone accepts as a normal participant in civilization.

Miss McCambridge made an absolutely terrifying moment of her chilling whisper to her husband, Horace, “I hope you die-soon,“ at the end of Act II, despite the potentially embarrassing obviousness of the line and the scene.

An important contribution to the play’s pervading air of urbane immorality was made by Stanley Gordon, who made Regina’s elder brother Benjamin a solid anchor of garrulous voraciousness. He constantly checked the drifting convictions of younger brother Oscar, played as a self-conscious victim of his sister and brother and of his heredity by Edgar Meyer.

The Northern side of the exploiters’ coin was ably represented by Howard Green, whose William Marshall was as slick and callous a Chicago baron as ever politely ground down a worker’s soul.

Nancy Heusel’s flitty Birdie Hubbard was a wonderful scatterbrain against Regina’s measured business competence. Mrs. Heusel made Birdie the second most pitiable character of the play, after hapless Horace, in a performance every bit as good in its way as was Miss McCambridge’s.

Horace Giddens, played with twisted smiles by Mark O’Daniels, looked progressively more cadaverous as events had their impact upon his failing heart. O’Daniels succeeded in registering the inroads of death while very nearly underplaying his part to create a picture of casual horror that gave the play much of its impact.

Beverly Pemberthy, almost a nonentity for the first two acts, burst forth into a telling characterization of Alexandra Giddens, Horace’s and Regina’s daughter, in Act III. Alexandra’s attack on her mother and her mother’s world, another potentially disastrous scene because of its closeness to melodrama, was given a subdued force by Miss Pemberthy that made it the play’s definitive movement.

Ben Gerard played slow-witted Leo, Oscar’s disappointing son, with a certain slightly impish direction of his own that created comedy relief without side-tracking the drama.

Kent Martin and Frances Foster gave old Negro retainers Cal and Addie a resignation within animation that made them good concrete representatives, for the audience, of what the Hubbard’s must be doing to the society outside the living room.

A fragile play about fragile people who don’t know how precariously perched they are, “The Little Foxes” lacks obvious excitement but becomes a fascinating exposition of character in Drama Season’s restrained production.