County College Board Turns To Question Of Site Choice 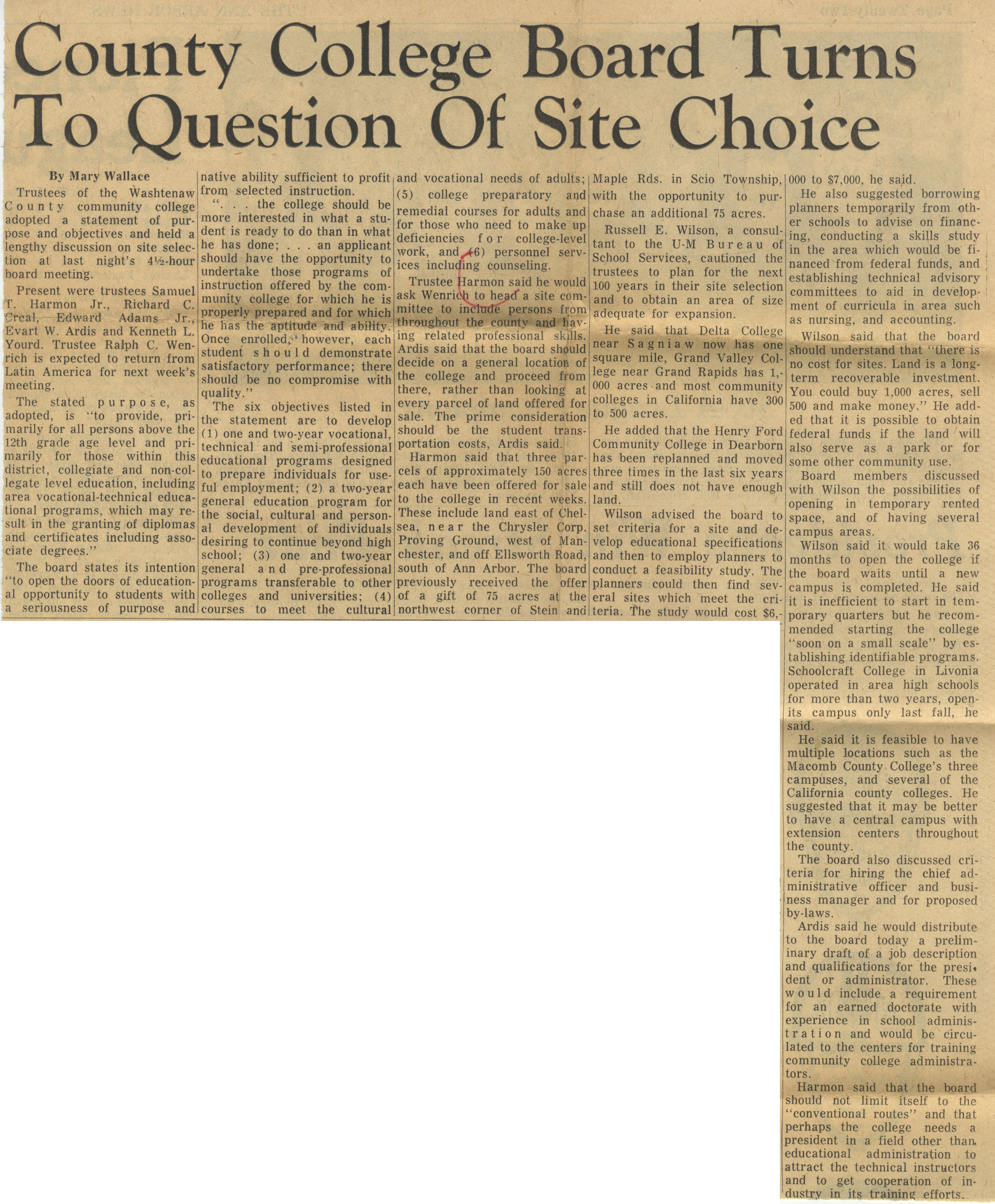 ﻿County College Board Turns To Question Of Site Choice

Trustees of the Washtenaw County community college adopted a statement of purpose and objectives and held a lengthy discussion on site selection at last night's 4 1/2-hour board meeting.

The stated purpose, as adopted, is "to provide, primarily for all persons above the 12th grade age level and primarily for those within this district, collegiate and non-collegiate level education, including area vocational-technical educational programs, which may result in the granting of diplomas and certificates including associate degrees.”

The board states its intention ‘‘to open the doors of educational opportunity to students with a seriousness of purpose and native ability sufficient to profit, from selected instruction.

“. . . the college should be more interested in what a student is ready to do than in what he has done;...an applicant should have the opportunity to undertake those programs of instruction offered by the community college for which he is properly prepared and for which he has the aptitude and ability. Once enrolled, however, each student should demonstrate satisfactory performance; there should be no compromise with quality.”

The six objectives listed in the statement are to develop (1) one and two-year vocational, technical and semi-professional educational programs designed to prepare individuals for useful employment; (2) a two-year general education program for the social, cultural and personal development of individuals desiring to continue beyond high school; (3) one and two-year general and pre-professional programs transferable to other colleges and universities; (4) courses to meet the cultural and vocational needs of adults; (5) college preparatory and remedial courses for adults and for those who need to make up deficiencies for college-level work, and (6) personnel services including counseling.

Trustee Harmon said he would ask Wenrich to head a site committee to include persons from throughout the county and having related professional skills. Ardis said that the board should decide on a general location of the college and proceed from there, rather than looking at every parcel of land offered for sale. The prime consideration should be the student transportation costs, Ardis said.

Harmon said that three parcels of approximately 150 acres each have been offered for sale to the college in recent weeks. These include land east of Chelsea, near the Chrysler Corp. Proving Ground, west of Manchester, and off Ellsworth Road, south of Ann Arbor. The board previously received the offer of a gift of 75 acres at the northwest corner of Stein and Maple Rds. in Scio Township, with the opportunity to purchase an additional 75 acres.

Russell E. Wilson, a consultant to the U-M Bureau of School Services, cautioned the trustees to plan for the next 100 years in their site selection and to obtain an area of size adequate for expansion.

He said that Delta College near Saginaw now has one square mile, Grand Valley College near Grand Rapids has 1,000 acres and most community colleges in California have 300 to 500 acres.

He added that the Henry Ford Community College in Dearborn has been replanned and moved three times in the last six years and still does not have enough land.

Wilson advised the board to set criteria for a site and develop educational specifications and then to employ planners to conduct a feasibility study. The planners could then find several sites which meet the criteria. The study would cost $6,000 to $7,000, he said.

He also suggested borrowing planners temporarily from other schools to advise on financing, conducting a skills study in the area which would be financed from federal funds, and establishing technical advisory committees to aid in development of curricula in area such as nursing, and accounting.

Wilson said that the board should understand that "there is no cost for sites. Land is a long-term recoverable investment. You could buy 1,000 acres, sell 500 and make money.” He added that it is possible to obtain federal funds if the land will also serve as a park or for some other community use.

Board members discussed with Wilson the possibilities of opening in temporary rented space, and of having several campus areas.

Wilson said it would take 36 months to open the college if the board waits until a new campus is completed. He said it is inefficient to start in temporary quarters but he recommended starting the college "soon on a small scale” by establishing identifiable programs. Schoolcraft College in Livonia operated in area high schools for more than two years, open its campus only last fall, he said.

He said it is feasible to have multiple locations such as the Macomb County College’s three campuses, and several of the California county colleges. He suggested that it may be better to have a central campus with extension centers throughout the county.

The board also discussed criteria for hiring the chief administrative officer and business manager and for proposed by-laws.

Ardis said he would distribute to the board today a preliminary draft of a job description and qualifications for the president or administrator. These would include a requirement for an earned doctorate with experience in school administration and would be circulated to the centers for training community college administrators.

Harmon said that the board should not limit itself to the "conventional routes” and that perhaps the college needs a president in a field other than educational administration to attract the technical instructors and to get cooperation of industry in its training efforts.