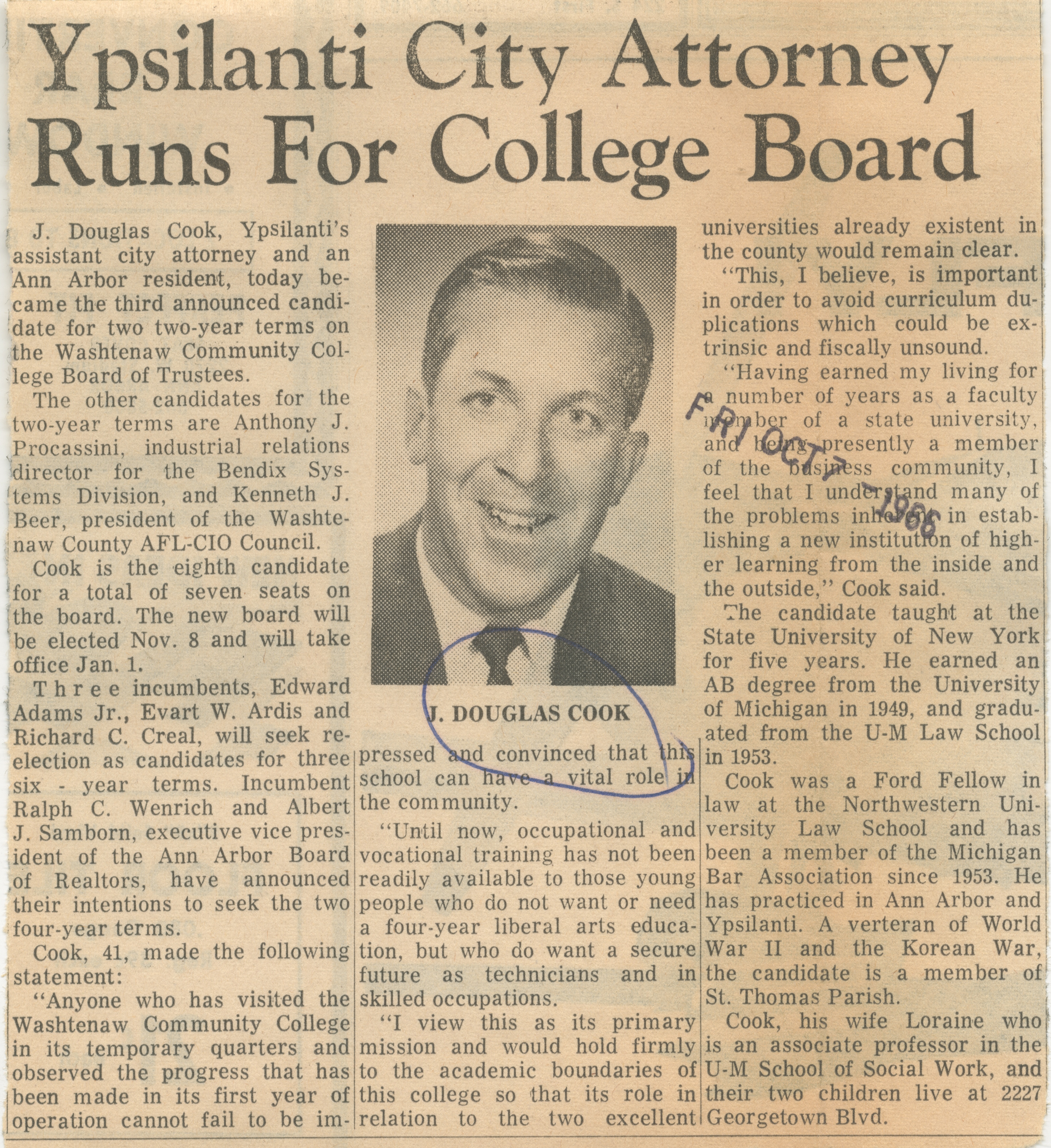 J. Douglas Cook, Ypsilanti's assistant city attorney and an Ann Arbor resident, today became the third announced candidate for two two-year terms on the Washtenaw Community College Board of Trustees.
The other candidates for the two-year terms are Anthony J. Procassini, industrial relations director for the Bendix Systems Division, and Kenneth J. Beer, president of the Washtenaw County AFL-CIO Council.
Cook is the eighth candidate for a total of seven seats on the board. The new board will be elected Nov. 8 and will take office Jan. 1.
Three incumbents, Edward Adams Jr., Evart W. Ardis and Richard C. Creal, will seek reelection as candidates for three six - year terms. Incumbent Ralph C. Wenrich and Albert J. Samborn, executive vice president of the Ann Arbor Board of Realtors, have announced their intentions to seek the two four-year terms.
Cook, 41, made the following statement:
"Anyone who has visited the Washtenaw Community College in its temporary quarters and observed the progress that has been made in its first year of operation cannot fail to be impressed and convinced that this school can have a vital role in the community.
"Until now, occupational and vocational training has not been readily available to those young people who do not want or need a four-year liberal arts education, but who do want a secure future as technicians and in skilled occupations,
"I view this as its primary mission and would hold firmly to the academic boundaries of this college so that its role in relation to the two excellent universities already existent in the county would remain clear.
"This, I believe, is important in order to avoid curriculum duplications which could be extrinsic and fiscally unsound.
"Having earned my living for A number of years as a faculty
raber of a state university, and being presently a member of the Business community, I feel that I understand many of the problems inhed in establishing a new institution of higher learning from the inside and the outside," Cook said.
he candidate taught at the State University of New York for five years. He earned an AB degree from the University of Michigan in 1949, and graduated from the U-M Law School Sin 1953.
Cook was a Ford Fellow in law at the Northwestern University Law School and has n been a member of the Michigan Bar Association since 1953. He has practiced in Ann Arbor and -- Ypsilanti. A veteran of World War II and the Korean War, the candidate is a member of St. Thomas Parish. y Cook, his wife Loraine who is an associate professor in the U-M School of Social Work, and their two children live at 2227 Georgetown Blvd.