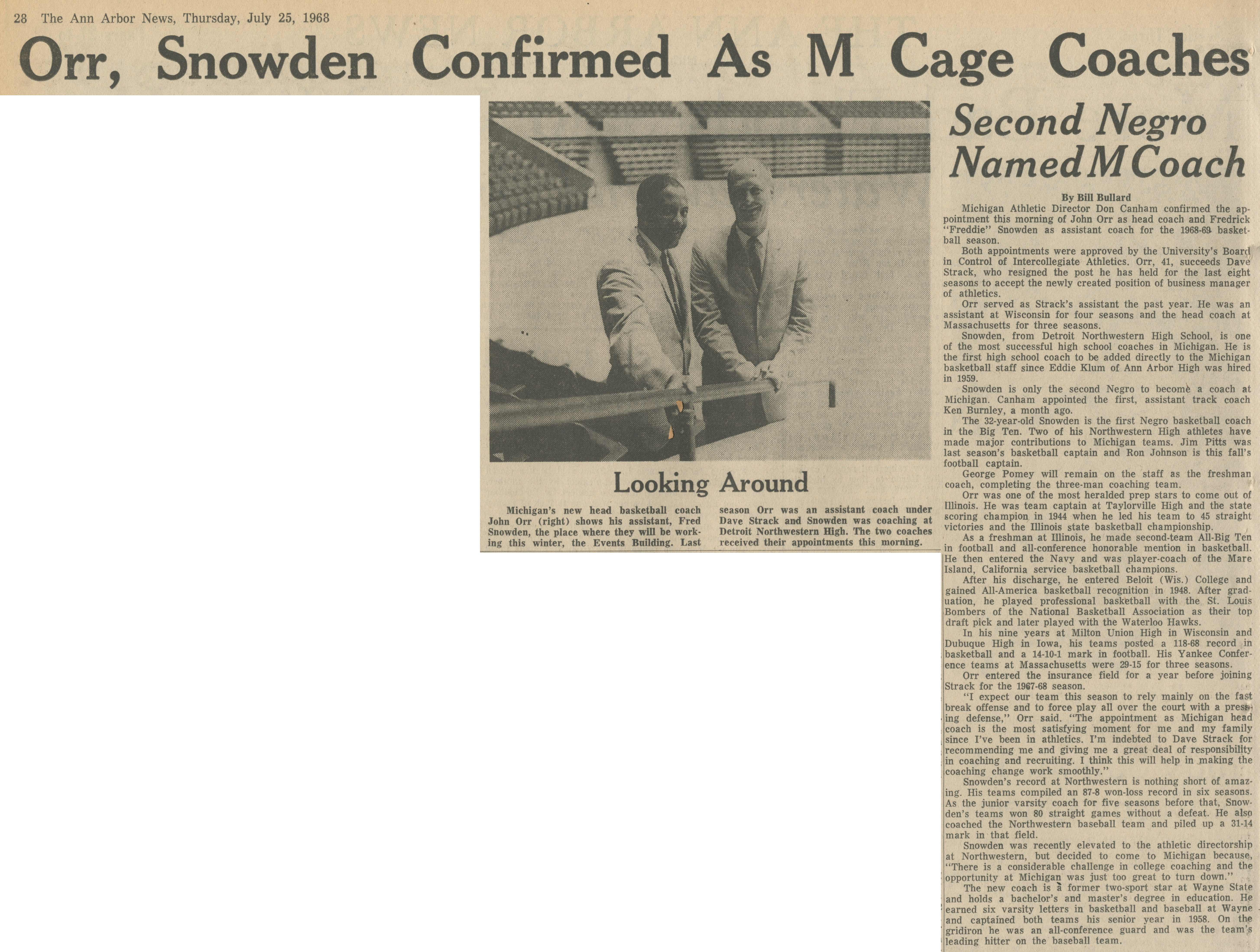 ﻿28 The Ann Arbor News, Thursday, July 25, 1968<br><br>Orr, Snowden Confirmed As M Cage Coaches<br><br>Looking Around<br><br>Michigan’s new head basketball coach John Orr (right) shows his assistant, Fred Snowden, the place where they will be working this winter, the Events Bnilding. Last<br><br>season Orr was an assistant coach nnder Dave Strack and Snowden was coaching at Detroit Northwestern High. The two coaches received their appointments this morning.<br><br>Second Negro Named M Coach<br><br>By Bill Bullard<br><br>Michigan Athletic Director Don Canham confirmed the appointment this morning of John Orr as head coach and Fredrick “Freddie” Snowden as assistant coach for the 1968-69 basketball season.<br><br>Both appointments were approved by the University’s Board in Control of Intercollegiate Athletics. Orr, 41, succeeds Dave Strack, who resigned the post he has held for the last eight seasons to accept the newly created position of business manager of athletics.<br><br>Orr served as Strack’s assistant the past year. He was an assistant at Wisconsin for four seasons and the head coach at Massachusetts for three seasons.<br><br>Snowden, from Detroit Northwestern High School, is one of the most successful high school coaches in Michigan. He is the first high school coach to be added directly to the Michigan basketball staff since Eddie Klum of Ann Arbor High was hired in 1959.<br><br>Snowden is only the second Negro to becomfe a coach at Michigan. Canham appointed the first, assistant track coach Ken Burnley, a month ago.<br><br>The 32-year-old Snowden is the first Negro basketball coach in the Big Ten. Two of his Northwestern High athletes have made major contributions to Michigan teams. Jim Pitts was last season’s basketball captain and Ron Johnson is this fall’s football captain.<br><br>George Pomey will remain on the staff as the freshman coach, completing the three-man coaching team.<br><br>Orr was one of the most heralded prep stars to come out of Illinois. He was team captain at Taylorville High and the state scoring champion in 1944 when he led his team to 45 straight victories and the Illinois state basketball championship.<br><br>As a freshman at Illinois, he made second-team All-Big Ten in football and all-conference honorable mention in basketball. He then entered the Navy and was player-coach of the Mare Island, California service basketball champions.<br><br>After his discharge, he entered Beloit (Wis.) College and gained All-America basketball recognition in 1948. After graduation, he played professional basketball with the St. Louis Bombers of the National Basketball Association as their top draft pick and later played with the Waterloo Hawks.<br><br>In his nine years at Milton Union High in Wisconsin and Dubuque High in Iowa, his teams posted a 118-68 record in basketball and a 14-10-1 mark in football. His Yankee Conference teams at Massachusetts were 29-15 for three seasons.<br><br>Orr entered the insurance field for a year before joining Strack for the 1967-68 season.<br><br>“I expect our team this season to rely mainly on the fast break offense and to force play all over the court with a pressing defense,” Orr said. “The appointment as Michigan head coach is the most satisfying moment for me and my family since I’ve been in athletics. I’m indebted to Dave Strack for recommending me and giving me a great deal of responsibility in coaching and recruiting. I think this will help in making the coaching change work smoothly.”<br><br>Snowden’s record at Northwestern is nothing short of amazing. His teams compiled an 87-8 won-loss record in six seasons. As the junior varsity coach for five seasons before that, Snowden’s teams won 80 straight games without a defeat. He also coached the Northwestern baseball team and piled up a 31-14 mark in that field.<br><br>Snowden was recently elevated to the athletic directorship at Northwestern, but decided to come to Michigan because, “There is a considerable challenge in college coaching and the opportunity at Michigan was just too great to turn down.”<br><br>The new coach is a former two-sport star at Wayne Stale and holds a bachelor’s and master’s degree in education. He : earned six varsity letters in basketball and baseball at Wayne . and captained both teams his senior year in 1958. On the gridiron he was an all-conference guard and was the team’s leading hitter on the baseball team.