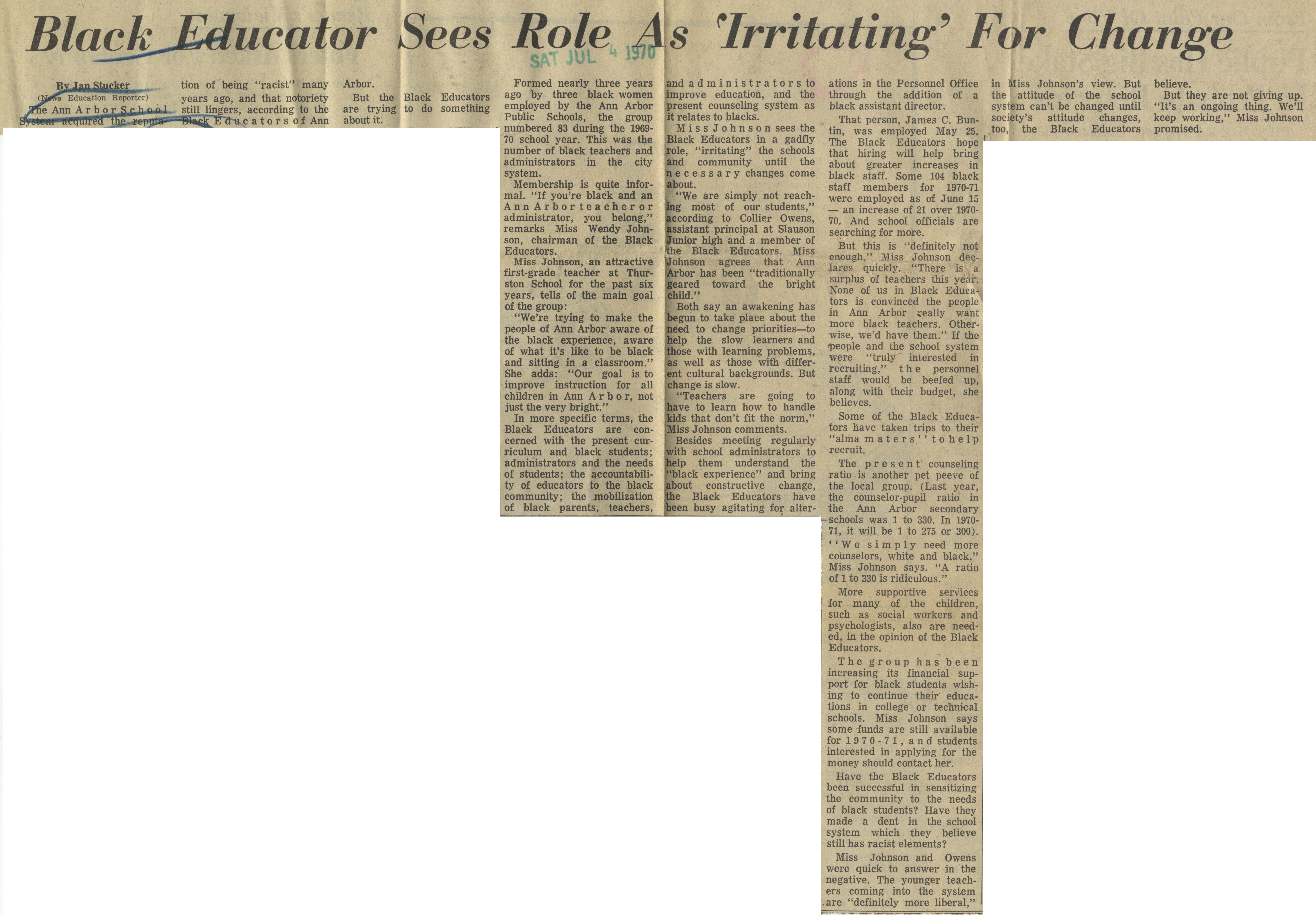 The Ann Arbor School System acquired the reputation of being “racist” many years ago, and that notoriety still lingers, according to the Black Educators of Ann Arbor.

But the Black Educators are trying to do something about it.

Formed nearly three years ago by three black women employed by the Ann Arbor Public Schools, the group numbered 83 during the 1969-70 school year. This was the number of black teachers and administrators in the city system.

Membership is quite informal. “If you’re black and an Ann Arbor teache ror administrator, you belong,” remarks Miss Wendy Johnson, chairman of the Black Educators.

Miss Johnson, an attractive first-grade teacher at Thurston School for the past six years, tells of the main goal of the group:

“We’re trying to make the people of Ann Arbor aware of the black experience, aware of what it’s like to be black and sitting in a classroom.” She adds: “Our goal is to improve instruction for all children in Ann Arbor, not just the very bright.”

In more specific terms, the Black Educators are concerned with the present curriculum and black students; administrators and the needs of students; the accountability of educators to the black community; the mobilization of black parents, teachers, and administrators to improve education, and the present counseling system as it relates to blacks.

Miss Johnson sees the Black Educators in a gadfly role, “irritating” the schools and community until the necessary changes come about.

“We are simply not reading most of our students,” according to Collier Owens, assistant principal at Slauson Junior High and a member of the Black Educators. Miss Johnson agrees that Ann Arbor has been “traditionally geared toward the bright child.”

Both say an awakening has begun to take place about the need to change priorities—to the slow learners and with learning problems, as well as those with different cultural backgrounds. But change is slow.

“Teachers are going to have to learn how to handle kids that don’t fit the norm,” Miss Johnson comments.

Besides meeting regularly with school administrators to help them understand the "black experience” and bring about constructive change, the Black Educators have been busy agitating for alterations in the Personnel Office through the addition of a black assistant director.

That person, James C. Buntin, was employed May 25. The Black Educators hope that hiring will help bring about greater increases in black staff. Some 104 black staff members for 1970-71 were employed as of June 15 — an increase of 21 over 1970-70. And school officials are searching for more.

But this is “definitely not enough,” Miss Johnson declares quickly. “There is a surplus of teachers this year. None of us in Black Educators is convinced the people in Ann Arbor really want more black teachers. Otherwise, we’d have them.” If the people and the school system were “truly interested in recruiting,” the personnel staff would be beefed up, along with their budget, she believes.

Some of the Black Educators have taken trips to their “alma maters” to help recruit.

More supportive services for many of the children, such as social workers and psychologists, also are needed, in the opinion of the Black Educators.

The group has been increasing its financial support for black students wishing to continue their educations in college or technical schools. Miss Johnson says some funds are still available for 1970-71, and students interested in applying for the money should contact her.

Have the Black Educators been successful in sensitizing the community to the needs of black students? Have they made a dent in the school system which they believe still has racist elements?

Miss Johnson and Owens were quick to answer in the negative. The younger teachers coming into the system are “definitely more liberal,” in Miss Johnson's view. But the attitude of the school system can't be changed until society's attitude changes too, the Black Educators believe.

But they are not giving up. "It's an ongoing thing. We'll keep working," Miss Johnson promised.