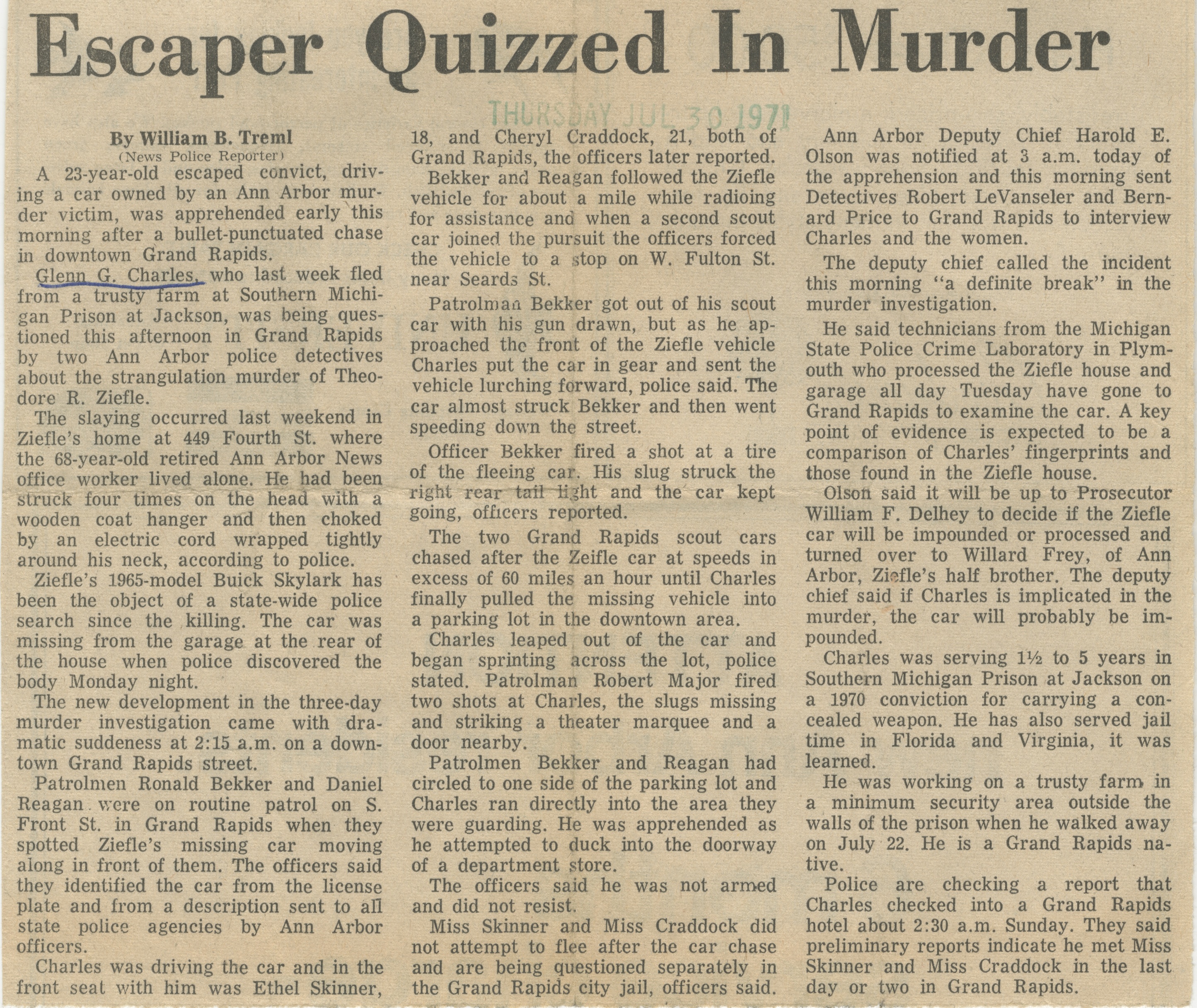 A 23-year-old escaped convict, driving a car owned by an Ann Arbor murder victim, was apprehended early this morning after a bullet-punctuated chase in downtown Grand Rapids.

Glenn G. Charles, who last week fled from a trusty farm at Southern Michigan Prison at Jackson, was being questioned this afternoon in Grand Rapids by two Ann Arbor police detectives about the strangulation murder of Theodore R. Ziefle.

The slaying occurred last weekend in Ziefle’s home at 449 Fourth St. where the 68-year-old retired Ann Arbor News office worker lived alone. He had been struck four times on the head with a wooden coat hanger and then choked by an electric cord wrapped tightly around his neck, according to police.

Ziefle’s 1965-model Buick Skylark has been the object of a state-wide police search since the killing. The car was missing from the garage at the rear of the house when police discovered the body Monday night.

The new development in the three-day murder investigation came with dramatic suddeness at 2:15 a.m. on a downtown Grand Rapids street.

Patrolmen Ronald Bekker and Daniel Reagan were on routine patrol on S. Front St. in Grand Rapids when they spotted Ziefle’s missing car moving along in front of them. The officers said they identified the car from the license plate and from a description sent to all state police agencies by Ann Arbor officers.

Charles was driving the car and in the front seat with him was Ethel Skinner,

18, and Cheryl Craddock, 21, both of Grand Rapids, the officers later reported.

Bekker and Reagan followed the Ziefle vehicle for about a mile while radioing for assistance and when a second scout car joined the pursuit the officers forced the vehicle to a stop on W. Fulton St. near Seards St.

Patrolman Bekker got out of his scout car with his gun drawn, but as he approached the front of the Ziefle vehicle Charles put the car in gear and sent the vehicle lurching forward, police said. The car almost struck Bekker and then went speeding down the street.

Officer Bekker fired a shot at a tire of the fleeing car. His slug struck the right rear tail light and the car kept going, officers reported.

The two Grand Rapids scout cars chased after the Zeifle car at speeds in excess of 60 miles an hour until Charles finally pulled the missing vehicle into a parking lot in the downtown area.

Charles leaped out of the car and began sprinting across the lot, police stated. Patrolman Robert Major fired two shots at Charles, the slugs missing and striking a theater marquee and a door nearby.

Patrolmen Bekker and Reagan had circled to one side of the parking lot and Charles ran directly into the area they were guarding. He was apprehended as he attempted to duck into the doorway of a department store.

The officers said he was not armed and did not resist.

Miss Skinner and Miss Craddock did not attempt to flee after the car chase and are being questioned separately in the Grand Rapids city jail, officers said.

Ann Arbor Deputy Chief Harold E. Olson was notified at 3 a.m. today of the apprehension and this morning sent Detectives Robert LeVanseler and Bernard Price to Grand Rapids to interview Charles and the women.

The deputy chief called the incident this morning “a definite break” in the murder investigation.

He said technicians from the Michigan State Police Crime Laboratory in Plymouth who processed the Ziefle house and garage all day Tuesday have gone to Grand Rapids to examine the car. A key point of evidence is expected to be a comparison of Charles’ fingerprints and those found in the Ziefle house.

Olson said it will be up to Prosecutor William F. Delhey to decide if the Ziefle car will be impounded or processed and turned over to Willard Frey, of Ann Arbor, Ziefle’s half brother. The deputy chief said if Charles is implicated in the murder, the car will probably be impounded.

Charles was serving 1 1/2 to 5 years in Southern Michigan Prison at Jackson on a 1970 conviction for carrying a concealed weapon. He has also served jail time in Florida and Virginia, it was learned.

He was working on a trusty farm in a minimum security area outside the walls of the prison when he walked away on July 22. He is a Grand Rapids native.

Police are checking a report that Charles checked into a Grand Rapids hotel about 2:30 a.m. Sunday. They said preliminary reports indicate he met Miss Skinner and Miss Craddock in the last day or two in Grand Rapids.