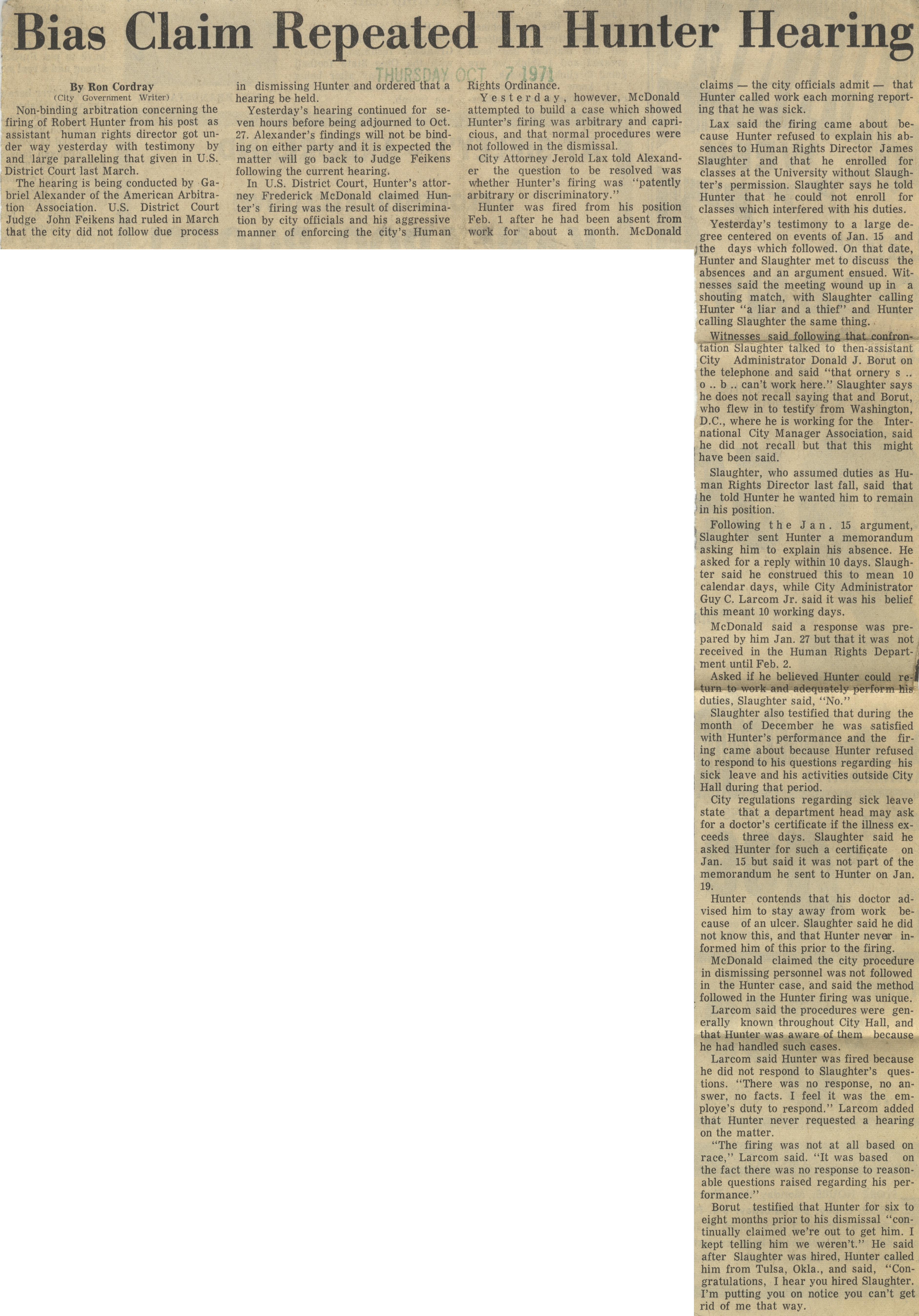 Non-binding arbitration concerning the firing of Robert Hunter from his post as assistant human rights director got under way yesterday with testimony by and large paralleling that given in U.S. District Court last March.

The hearing is being conducted by Gabriel Alexander of the American Arbitration Association. U.S. District Court Judge John Feikens had ruled in March that the city did not follow due process

in dismissing Hunter and ordered that a hearing be held.

Yesterday’s hearing continued for seven hours before being adjourned to Oct. 27. Alexander’s findings will not be binding on either party and it is expected the matter will go back to Judge Feikens following the current hearing.

In U.S. District Court, Hunter’s attorney Frederick McDonald claimed Hunter's firing was the result of discrimination by city officials and his aggressive manner of enforcing the city’s Human

Yesterday, however, McDonald attempted to build a case which showed Hunter’s firing was arbitrary and capricious, and that normal procedures were not followed in the dismissal.

City Attorney Jerold Lax told Alexander the question to be resolved was whether Hunter’s firing was “patently arbitrary or discriminatory.”

Hunter was fired from his position Feb. 1 after he had been absent from work for about a month. McDonald

claims — the city officials admit — that Hunter called work each morning reporting that he was sick.

Lax said the firing came about because Hunter refused to explain his absences to Human Rights Director James Slaughter and that he enrolled for classes at the University without Slaughter’s permission. Slaughter says he told Hunter that he could not enroll for classes which interfered with his duties.

Yesterday’s testimony to a large degree centered on events of Jan. 15 and the days which followed. On that date, Hunter and Slaughter met to discuss the absences and an argument ensued. Witnesses said the meeting wound up in a shouting match, with Slaughter calling Hunter “a liar and a thief” and Hunter calling Slaughter the same thing.

Witnesses said following that confrontation Slaughter talked to then-assistant City Administrator Donald J. Borut on the telephone and said "that ornery s .. o .. b .. can’t work here.” Slaughter says he does not recall saying that and Borut, who flew in to testify from Washington, D.C., where he is working for the International City Manager Association, said he did not recall but that this might have been said.

Slaughter, who assumed duties as Human Rights Director last fall, said that he told Hunter he wanted him to remain in his position.

Following the Jan. 15 argument, Slaughter sent Hunter a memorandum asking him to explain his absence. He asked for a reply within 10 days. Slaughter said he construed this to mean 10 calendar days, while City Administrator Guy C. Larcom Jr. said it was his belief this meant 10 working days.

McDonald said a response was prepared by him Jan. 27 but that it was not received in the Human Rights Department until Feb. 2.

Asked if he believed Hunter could return to work and adequately perform his duties, Slaughter said, “No.”

Slaughter also testified that during the month of December he was satisfied with Hunter’s performance and the firing came about because Hunter refused to respond to his questions regarding his sick leave and his activities outside City Hall during that period.

City regulations regarding sick leave state that a department head may ask for a doctor’s certificate if the illness exceeds three days. Slaughter said he asked Hunter for such a certificate on Jan. 15 but said it was not part of the memorandum he sent to Hunter on Jan. 19.

Hunter contends that his doctor advised him to stay away from work because of an ulcer. Slaughter said he did not know this, and that Hunter never informed him of this prior to the firing.

Larcom said the procedures were generally known throughout City Hall, and that Hunter was aware of them because he had handled such cases.

Larcom said Hunter was fired because he did not respond to Slaughter’s questions. “There was no response, no answer, no facts. I feel it was the employe’s duty to respond." Larcom added that Hunter never requested a hearing on the matter.

“The firing was not at all based on race,” Larcom said. “It was based on the fact there was no response to reasonable questions raised regarding his performance.”

Borut testified that Hunter for six to eight months prior to his dismissal “continually claimed we’re out to get him. I kept telling him we weren’t.” He said after Slaughter was hired, Hunter called him from Tulsa, Okla., and said, “Congratulations, I hear you hired Slaughter. I’m putting you on notice you can’t get rid of me that way.