Shaw Enough, It Looks Like Another Of Those Seasons 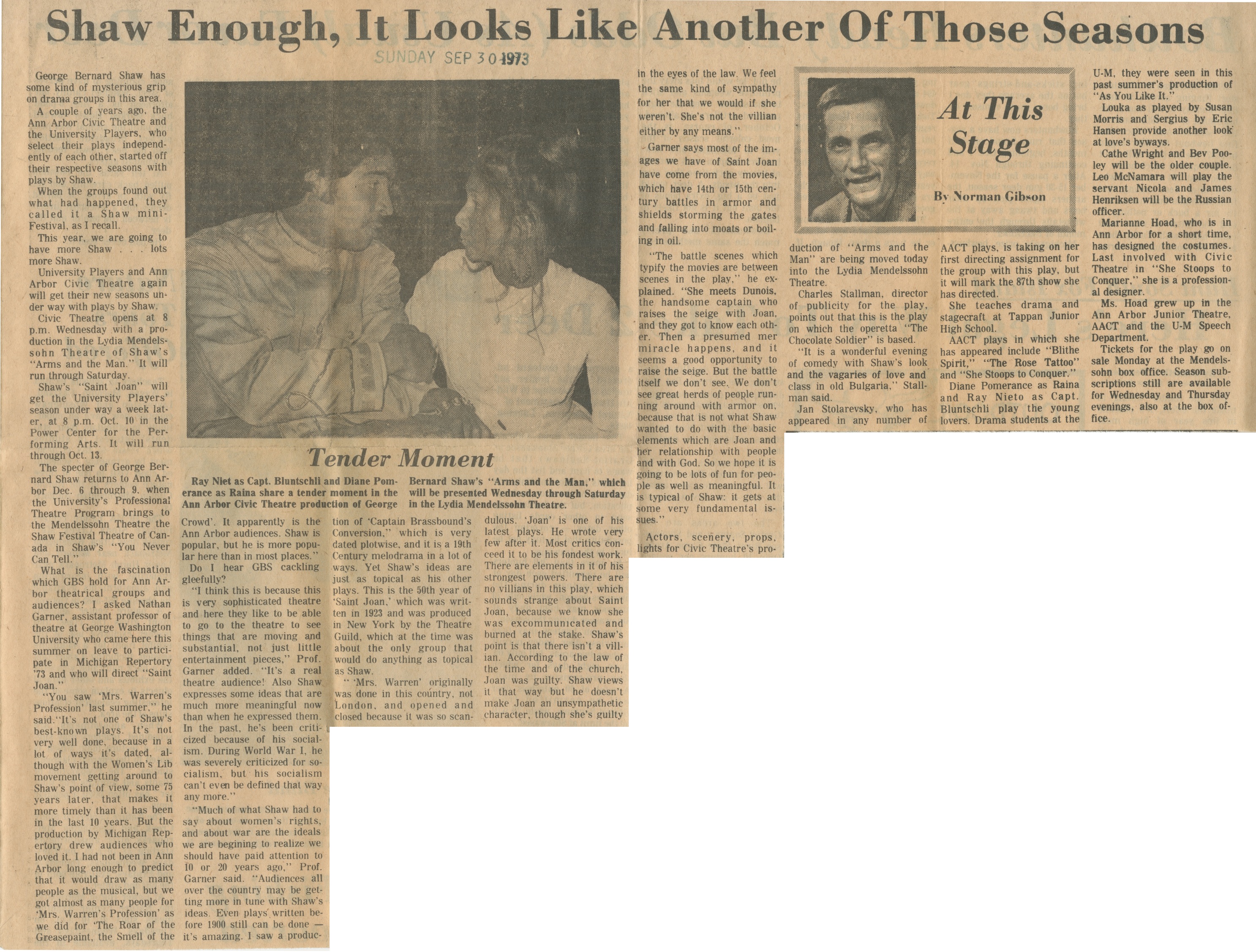 Shaw Enough, It Looks Like Another Of Those Seasons

George Bernard Shaw has some kind of mysterious grip on drama groups in this area.

A couple of years ago, the Ann Arbor Civic Theatre and the University Players, who select their plays independently of each other, started off their respective seasons with plays by Shaw.

When the groups found out what had happened, they called it a Shaw mini-Festival, as I recall.

This year, we are going to have more Shaw...lots more Shaw.

University Players and Ann Arbor Civic Theatre again will get their new seasons under way with plays by Shaw.

Civic Theatre opens at 8 p.m. Wednesday with a production in the Lydia Mendelssohn Theatre of Shaw's "Arms and the Man." It will run through Saturday.

Shaw's "Saint Joan" will get the University Players' season under way a week later, at 8 p.m. Oct. 10 in the Power Center for the Performing Arts. It will run through Oct. 13.

The specter of George Bernard Shaw returns to Ann Arbor Dec. 6 through 9, when the University's Professional Theatre Program brings to the Mendelssohn Theatre the Shaw Festival Theatre of Canada in Shaw's "You Never Can Tell."

What is the fascination which GBS hold for Ann Arbor theatrical groups and audiences? I asked Nathan Garner, assistant professor of theatre at George Washington University who came here this summer on leave to participate in Michigan Repertory '73 and who will direct "Saint Joan."

"You saw 'Mrs. Warren's Profession' last summer," he said. "It's not one of Shaw's best-known plays. It's not very well done, because in a lot of ways it's dated, although with the Women's Lib movement getting around to Shaw's point of view, some 75 years later, that makes it more timely than it has been in the last 10 years. But the production by Michigan Repertory drew audiences who loved it. I had not been in Ann Arbor long enough to predict that it would draw as many people as the musical, but we got almost as many people for 'Mrs. Warren's Profession' as we did for 'The Roar of the Greasepaint, the Smell of the Crowd.' It apparently is the Ann Arbor audiences. Shaw is popular, but he is more popular here than in most places."

Do I hear GBS cackling gleefully?

"I think this is because this is very sophisticated theatre and here they like to be able to go to the theatre to see things that are moving and substantial, not just little entertainment pieces," Prof. Garner added. "It's a real theatre audience! Also Shaw expresses some ideas that are much more meaningful now than when he expressed them. In the past, he's been criticized because of his socialism. During World War I, he was severely criticized for socialism, but his socialism can't even be defined that way any more."

"Much of what Shaw had to say about women's rights, and about war are the ideals we are beginning to realize we should have paid attention to 10 or 20 years ago," Prof. Garner said. "Audiences all over the country may be getting more in tune with Shaw's ideas. Even plays written before 1900 still can be done -- it's amazing. I saw a production of 'Captain Brassbound's Conversion," which is very dated plotwise, and it is a 19th Century melodrama in a lot of ways. Yet Shaw's ideas are just as topical as his other plays. This is the 50th year of 'Saint Joan,' which was written in 1923 and was produced in New York by the Theatre Guild, which at the time was about the only group that would do anything as topical as Shaw.

" 'Mrs. Warren' originally was done in this country, not London, and opened and closed because it was so scandalous. 'Joan' is one of his latest plays. He wrote very few after it. Most critics concede it to be his fondest work. There are elements in it of his strongest powers. There are no villains in this play, which sounds strange about Saint Joan, because we know she was excommunicated and burned at the stake. Shaw's point is that there isn't a villain. According to the law of the time and of the church, Joan was guilty. Shaw views it that way but he doesn't make Joan an unsympathetic character, though she's guilty in the eyes of the law. We feel the same kin of sympathy for her that we would if she weren't. She's not the villain either by any means.

Garner says most of the images we have of Saint Joan have come from the movies, which have 14th or 15th century battles in armor and shields storming the gates and falling into moats or boiling in oil.

"The battle scenes which typify the movies are between scenes in the play," he explained. "She meets Dunois, the handsome captain who raises the siege with Joan, and they get to know each other. Then a presumed miracle happens, and it seems a good opportunity to raise the siege. But the battle itself we don't see. We don't see great herds of people running around with armor on, because that is not what Shaw wanted to do with the basic elements which are Joan and her relationship with people and with God. So we hope it is going to be lots of fun for people as well as meaningful. It is typical of Shaw: it gets at some very fundamental issues."

Actors, scenery, props, lights for Civic Theatre's production of "Arms and the Man" are being moved today into the Lydia Mendelssohn Theatre.

Charles Stallman, director of publicity for the play, points out that this is the play on which the operetta "The Chocolate Soldier" is based.

"It is a wonderful evening of comedy with Shaw's look and the vagaries of love and class in old Bulgaria," Stallman said.

Jan Stolarevsky, who has appeared in any number of AACT plays, is taking on her first directing assignment for the group with this play, but it will mark the 87th show she has directed.

She teaches drama and stagecraft at Tappan Junior High School.

AACT plays in which she has appeared include "Blithe Spirit," "The Rose Tattoo" and "She Stoops to Conquer."

Diane Pomerance as Raina and Ray Nieto as Capt. Bluntschli play the young lovers. Drama students at the U-M, they were seen in this past summer's production of "As You Like It."

Louka as played by Susan Morris and Sergius by Eric Hansen provide another look at love's byways.

Cathe Wright and Bev Pooley will be the older couple. Leo McNamara will play the servant Nicola and James Henriksen will be the Russian officer.

Marianne Hoad, who is in Ann Arbor for a short time, has designed the costumes. Last involved with Civic Theatre in "She Stoops to Conquer," she is a professional designer.

Ms. Hoad grew up in the Ann Arbor Junior Theatre, AACT and the U-M Speech Department.

Tickets for the play go on sale Monday at the Mendelssohn box office. Season subscriptions still are available for Wednesday and Thursday evenings, also at the box office.

Ray Niet as Capt. Bluntschli and Diane Pomerance as Raina share a tender moment in the Ann Arbor Civic Theatre production of George Bernard Shaw's "Arms and the Man," which will be presented Wednesday through Saturday in the Lydia Mendelssohn Theatre.