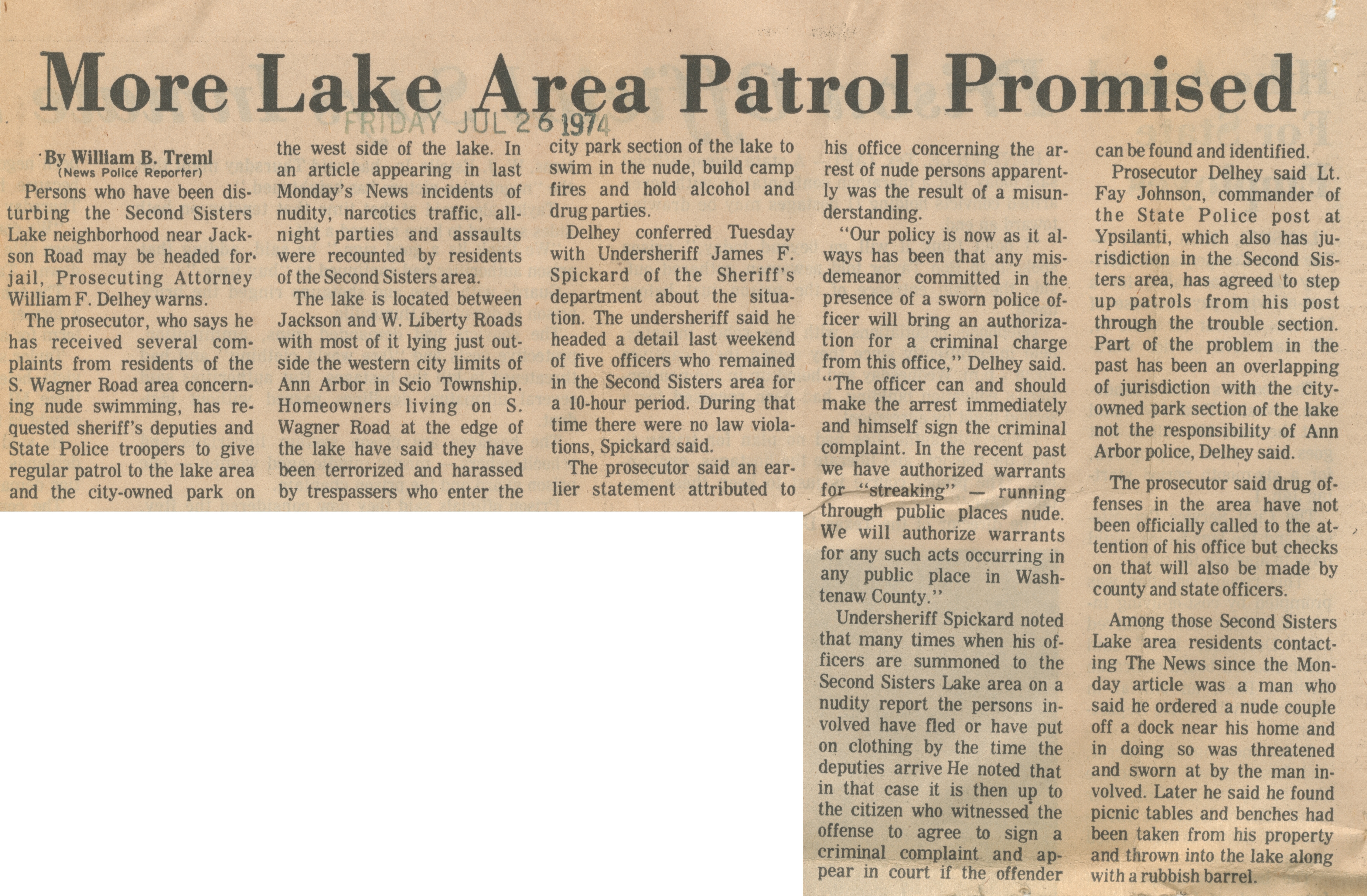 Persons who have been disturbing the Second Sisters Lake neighborhood near Jackson Road may be headed for jail, Prosecuting Attorney William F. Delhey warns.

The prosecutor, who says he has received several complaints from residents of the S. Wagner Road area concerning nude swimming, has requested sheriff’s deputies and State Police troopers to give regular patrol to the lake area and the city-owned park on the west side of the lake. In an article appearing in last Monday’s News incidents of nudity, narcotics traffic, all-night parties and assaults were recounted by residents of the Second Sisters area.

The lake is located between Jackson and W. Liberty Roads with most of it lying just outside the western city limits of Ann Arbor in Scio Township. Homeowners living on S. Wagner Road at the edge of the lake have said they have been terrorized and harassed by trespassers who enter the city park section of the lake to swim in the nude, build camp fires and hold alcohol and drug parties.

Delhey conferred Tuesday with Undersheriff James F. Spickard of the Sheriff’s department about the situation. The undersheriff said he headed a detail last weekend of five officers who remained in the Second Sisters area for a 10-hour period. During that time there were no law violations, Spickard said.

The prosecutor said an earlier statement attributed to his office concerning the arrest of nude persons apparently was the result of a misunderstanding.

“Our policy is now as it always has been that any misdemeanor committed in the presence of a sworn police officer will bring an authorization for a criminal charge from this office,” Delhey said. “The officer can and should make the arrest immediately and himself sign the criminal complaint. In the recent past we have authorized warrants — running places nude. We will authorize warrants for any such acts occurring in any public place in Washtenaw County.”

Undersheriff Spickard noted that many times when his officers are summoned to the Second Sisters Lake area on a nudity report the persons involved have fled or have put on clothing by the time the deputies arrive He noted that in that case it is then up to the citizen who witnessed the offense to agree to sign a criminal complaint and appear in court if the offender can be found and identified.

Prosecutor Delhey said Lt. Fay Johnson, commander of the State Police post at Ypsilanti, which also has jurisdiction in the Second Sisters area, has agreed to step up patrols from his post through the trouble section. Part of the problem in the past has been an overlapping of jurisdiction with the city-owned park section of the lake not the responsibility of Ann Arbor police, Delhey said.

The prosecutor said drug offenses in the area have not been officially called to the attention of his office but checks on that will also be made by county and state officers.

Among those Second Sisters Lake area residents contacting The News since the Monday article was a man who said he ordered a nude couple off a dock near his home and in doing so was threatened and sworn at by the man involved. Later he said he found picnic tables and benches had been taken from his property and thrown into the lake along with a rubbish barrel.