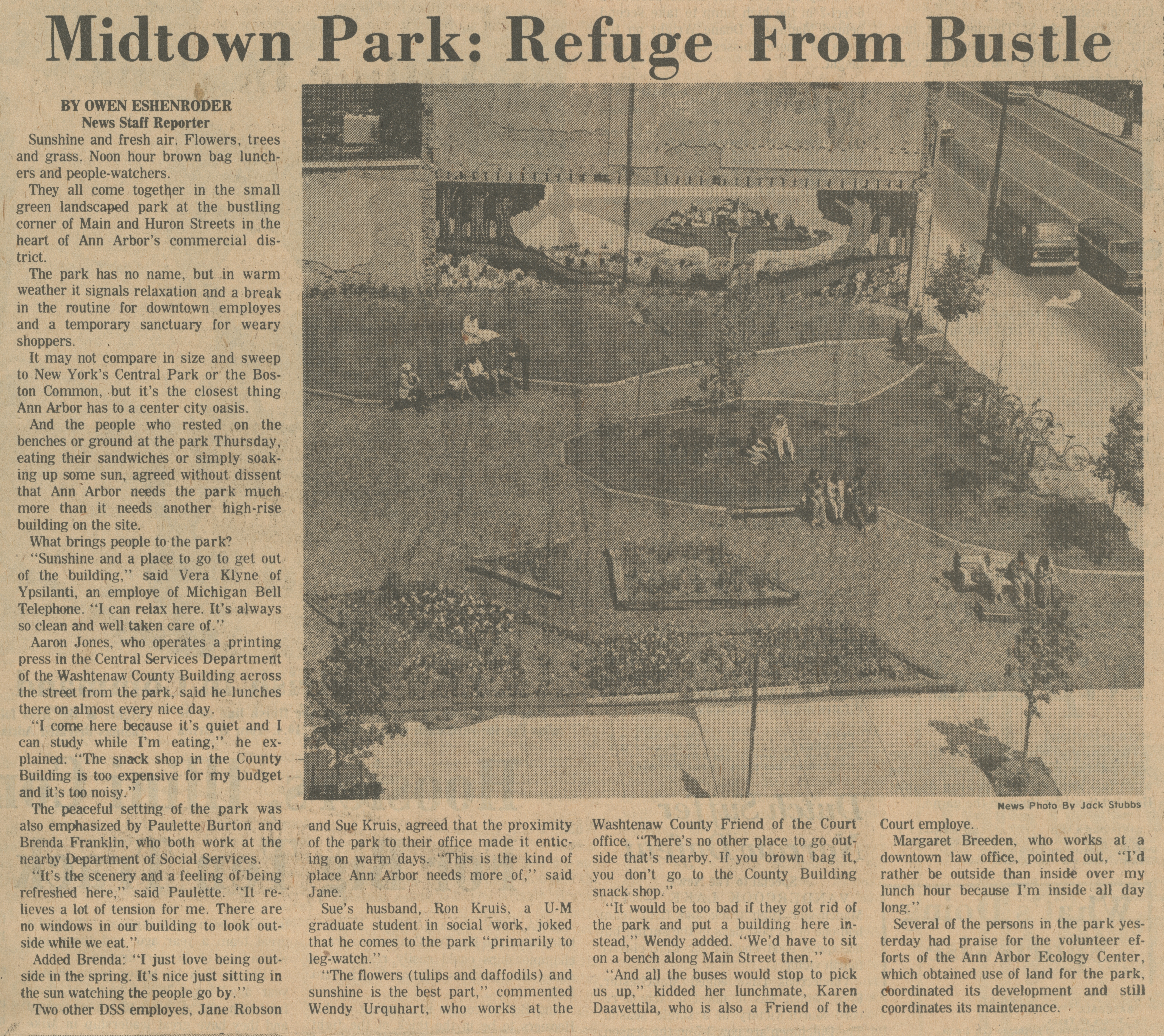 Sunshine and fresh air. Flowers, trees and grass. Noon hour brown bag lunchers and people-watchers. They all come together in the small green landscaped park at the bustling corner of Main and Huron Streets in the heart of Ann Arbor's commercial district. The park has no name, but in warm weather it signals relaxation and a break in the routine for downtown employees and a temporary sanctuary for weary shoppers. It may not compare in size and sweep to New York's Central Park or the Boston Common, but it's the closest thing Ann Arbor has to a center city oasis. And the people who rested on the benches or ground at the park Thursday, eating their sandwiches or simply soaking up some sun, agreed without dissent that Ann Arbor needs the park much more than it needs another high-rise building on the site. What brings people to the park? "Sunshine and a place to go to get out of the building," said Vera Klyne of Ypsilanti, an employee of Michigan Bell Telephone. "I can relax here. It's always so clean and well taken care of." Aaron Jones, who operates a printing press in the Central Services Department of the Washtenaw County Building across the street from the park, said he lunches there on almost every nice day. "I come here because it's quiet and I can study while I’m eating," he explained. "The snack shop in the County Building is too expensive for my budget and it's too noisy." The peaceful setting of the park was also emphasized by Paulette Burton and Brenda Franklin, who both work at the nearby Department of Social Services. "It's the scenery and a feeling of being refreshed here," said Paulette. "It relieves a lot of tension for me. There are no windows in our building to look outside while we eat." Added Brenda: "I just love being outside in the spring. It's nice just sitting in the sun watching the people go by." Two other DSS employees, Jane Robson and Sue Kruis, agreed that the proximity of the park to their office made it enticing on warm days. "This is the kind of place Ann Arbor needs more of," said Jane. Sue's husband, Ron Kruis, a U-M graduate student in social work, joked that he comes to the park "primarily to leg-watch." "The flowers (tulips and daffodils) and sunshine is the best part," commented Wendy Urquhart, who works at the Washtenaw County Friend of the Court office. "There's no other place to go outside that's nearby. If you brown bag it, you don't go to the County Building snack shop." "It would be too bad if they got rid of the park and put a building here instead," Wendy added. "We'd have to sit on a bench along Main Street then." "And all the buses would stop to pick us up," kidded her lunchmate, Karen Daavettila, who is also a Friend of the Court employee. Margaret Breeden, who works at a downtown law office, pointed out, “I’d rather be outside than inside over my lunch hour because I'm inside all day long.” Several of the persons in the park yesterday had praise for the volunteer efforts of the Ann Arbor Ecology Center, which obtained use of land for the park, coordinated its development, and still coordinates its maintenance.