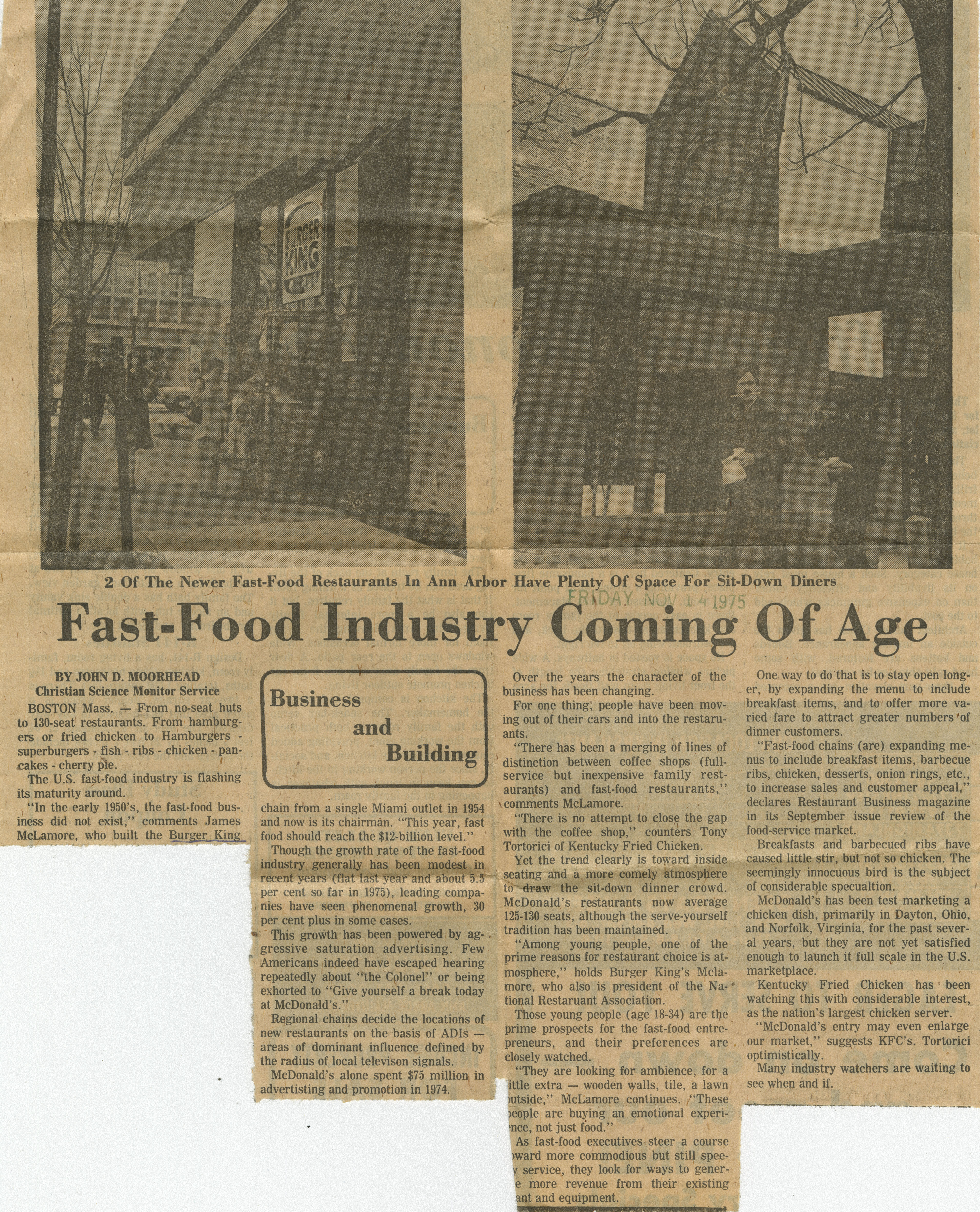 The U.S. fast-food industry is flashing its maturity around.

“In the early 1950’s, the fast-food business did not exist,” comments James McLamore, who built the Burger King chain from a single Miami outlet in 1954 and now is its chairman. “This year, fast food should reach the $12-billion level.”

Though the growth rate of the fast-food industry generally has been modest in recent years (flat last year and about 5.5 per cent so far in 1975), leading companies have seen phenomenal growth, 30 per cent plus in some cases.

This growth has been powered by aggressive saturation advertising. Few Americans indeed have escaped hearing repeatedly about “the Colonel” or being exhorted to “Give yourself a break today at McDonald’s.”

Regional chains decide the locations of new restaurants on the basis of ADIs — areas of dominant influence defined by the radius of local television signals.

McDonald’s alone spent $75 million in advertising and promotion in 1974.

Over the years the character of the business has been changing.

For one thing; people have been moving out of their cars and into the restaurants.

“There has been a merging of lines of distinction between coffee shops (full-service but inexpensive family restaurants) and fast-food restaurants,” comments McLamore.

“There is no attempt to close the gap with the coffee shop,” counters Tony Tortorici of Kentucky Fried Chicken.

Yet the trend clearly is toward inside seating and a. more comely atmosphere to draw the sit-down dinner crowd. McDonald’s restaurants now average 125-130 seats, although the serve-yourself tradition has been maintained.

“Among young people, one of the prime reasons for restaurant choice is atmosphere,” holds Burger King’s Mclamore, who also is president of the National Restaurant Association.

Those young people (age 18-34) are the prime prospects for the fast-food entrepreneurs, and their preferences are closely watched.

“They are looking for ambience, for a little extra — wooden walls, tile, a lawn outside,” McLamore continues. “These people are buying an emotional experience, not just food.”

As fast-food executives steer a course toward more commodious but still speedy service, they look for ways to generate more revenue from their existing ant and equipment.

One way to do that is to stay open longer, by expanding the menu to include breakfast items, and to offer more varied fare to attract greater numbers of dinner customers.

Breakfasts and barbecued ribs have caused little stir, but not so chicken. The seemingly innocuous bird is the subject of considerable speculation.

McDonald's has been test marketing a chicken dish, primarily in Dayton, Ohio, and Norfolk, Virginia, for the past several years, but they are not yet satisfied enough to launch it full scale in the U.S. marketplace.

Kentucky Fried Chicken has been watching this with considerable interest, as the nation’s largest chicken server.

Many industry watchers are waiting to see when and if.