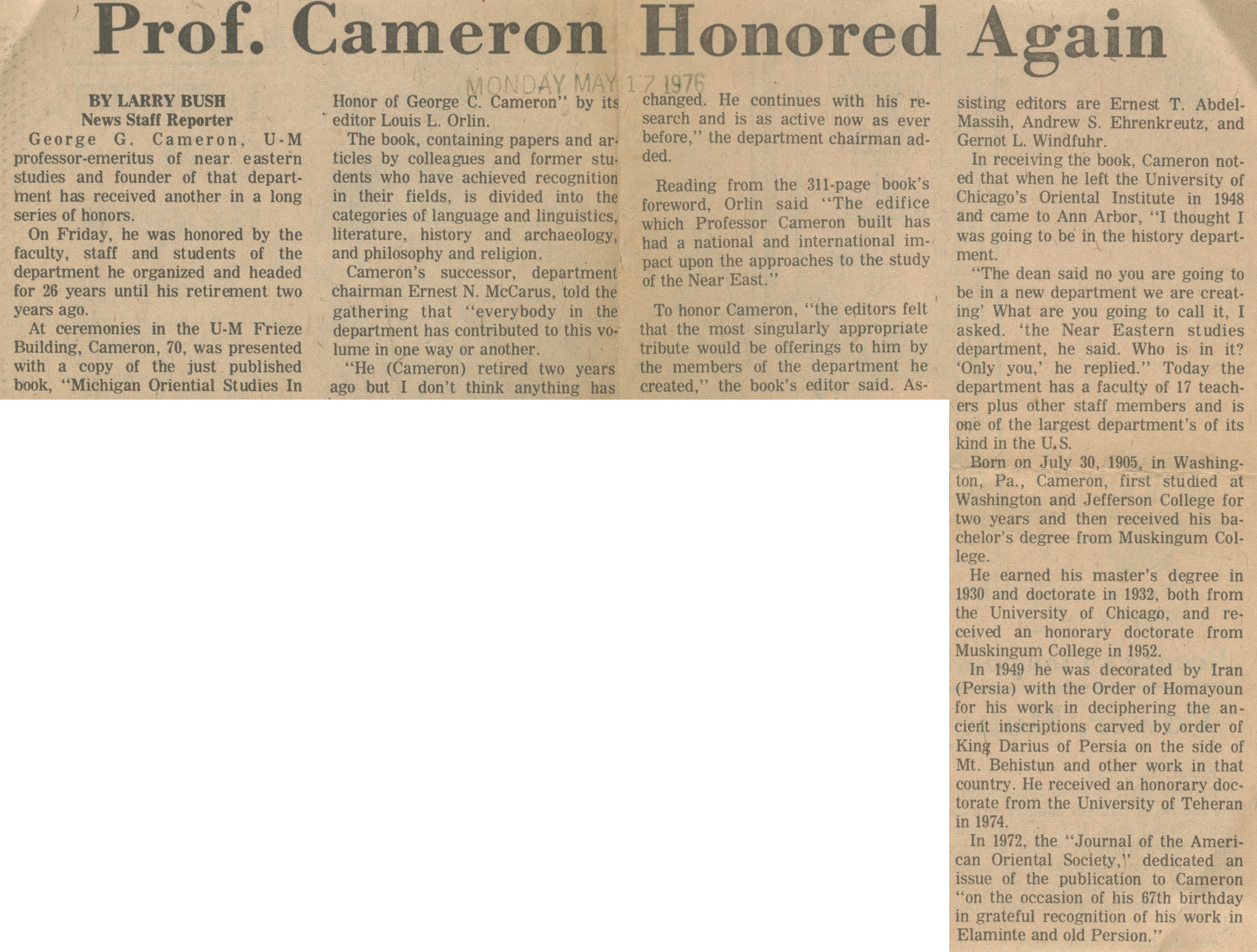 George G, Cameron, U-M professor-emeritus of near eastern studies and founder of that department has received another in a long series of honors.
On Friday, he was honored by the faculty, staff and students of the department he organized and headed for 26 years until his retirement two years ago.
At ceremonies in the U-M Frieze Building, Cameron, 70, was presented with a copy of the just published book, “Michigan Oriental Studies in Honor of George C. Cameron” by its editor Louis L. Orlin.
The book, containing papers and articles by colleagues and former students who have achieved recognition in their fields, is divided into the categories of language and linguistics, literature, history and archaeology, and philosophy and religion.
Cameron’s successor, department chairman Ernest N. McCarus, told the gathering that “everybody in the department has contributed to this volume in one way or another.
“He (Cameron) retired two years ago but I don’t think anything has changed. He continues with his research and is as active now as ever before,” the department chairman added.
Reading from the 311-page book’s foreword, Orlin said “The edifice which Professor Cameron built has had a national and international impact upon the approaches to the study of the Near East.”
To honor Cameron, “the editors felt that the most singularly appropriate tribute would be offerings to him by the members of the department he created,” the book’s editor said. Assisting editors are Ernest T. Abdel-Massih, Andrew S. Ehrenkreutz, and Gernot L. Windfuhr.
In receiving the book, Cameron noticed that when he left the University of Chicago’s Oriental Institute in 1948 and came to Ann Arbor, “I thought I was going to be in the history department.
“The dean said no you are going to be in a new department we are creating’ What are you going to call it, I asked. ‘the Near Eastern studies department, he said. Who is in it? ‘Only you,’ he replied.” Today the department has a faculty of 17 teachers plus other staff members and is one of the largest department’s of its kind in the U.S.
Born on July 30, 1905, in Washington, Pa., Cameron, first studied at Washington and Jefferson College for two years and then received his bachelor’s degree from Muskingum College.
He earned his master’s degree in 1930 and doctorate in 1932, both from the University of Chicago, and received an honorary doctorate from Muskingum College in 1952.
In 1949 he was decorated by Iran (Persia) with the Order of Homayoun for his work in deciphering the ancient inscriptions carved by order of King Darius of Persia on the side of Mt. Behistun and other work in that country. He received an honorary doctorate from the University of Teheran in 1974.
In 1972, the “Journal of the American Oriental Society,” dedicated an issue of the publication to Cameron “on the occasion of his 67th birthday in grateful recognition of his work in Elaminte and old Persion.”