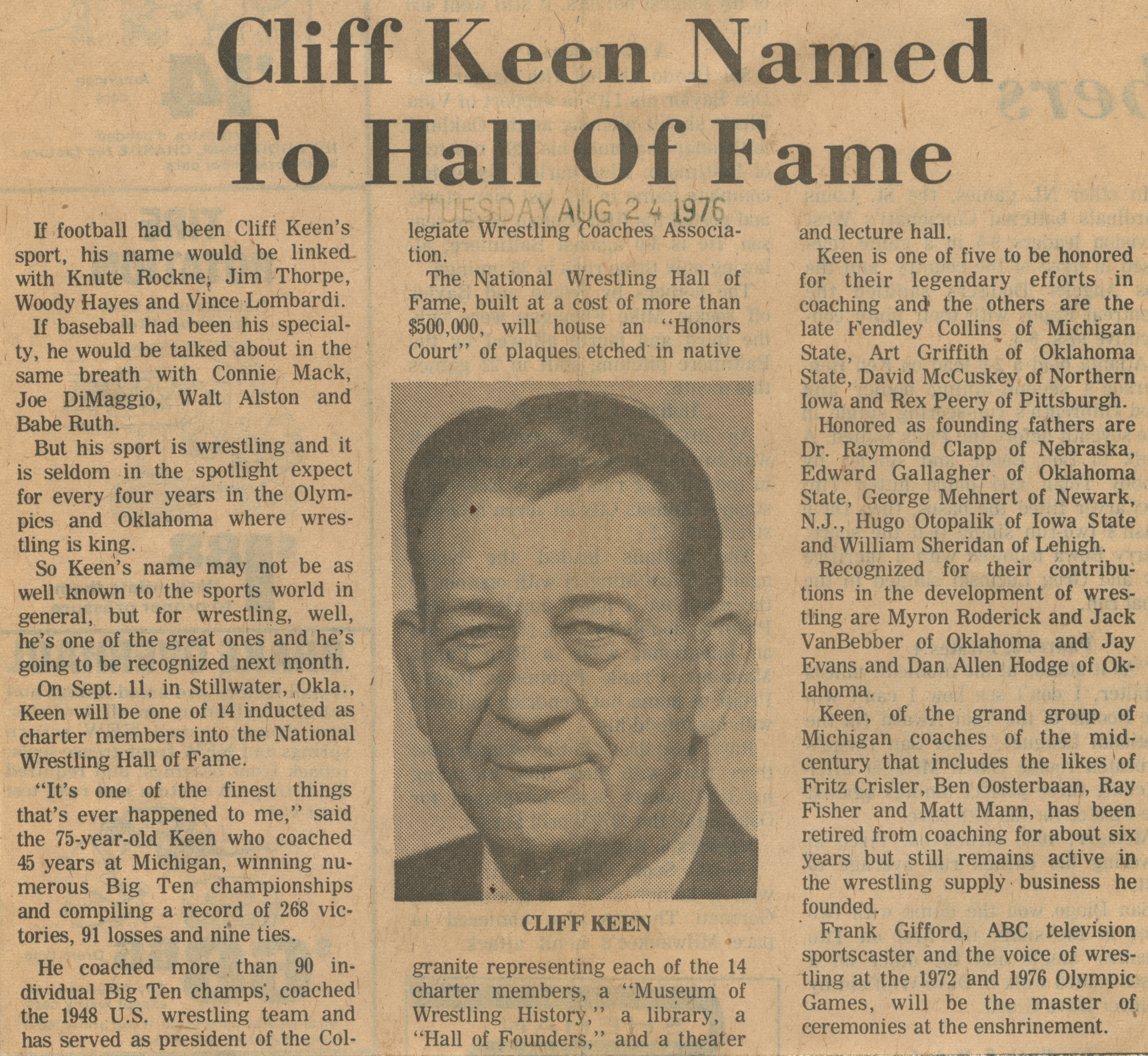 If football had been Cliff Keen’s sport, his name would be linked with Knute Rockne, Jim Thorpe, Woody Hayes and Vince Lombardi.

If baseball had been his specialty, he would be talked about in the same breath with Connie Mack, Joe DiMaggio, Walt Alston and Babe Ruth.

But his sport is wrestling and it is seldom in the spotlight expect for every four years in the Olympics and Oklahoma where wrestling is king.

So Keen’s name may not be as well known to the sports world in general, but for wrestling, well, he’s one of the great ones and he’s going to be recognized next month.

On Sept. 11, in Stillwater, Okla., Keen will be one of 14 inducted as charter members into the National Wrestling Hall of Fame.

“It’s one of the finest things that’s ever happened to me,” said the 75-year-old Keen who coached 45 years at Michigan, winning numerous Big Ten championships and compiling a record of 268 victories, 91 losses and nine ties.

He coached more than 90 individual Big Ten champs', coached the 1948 U.S. wrestling team and has served as president of the Collegiate Wrestling Coaches Association.

The National Wrestling Hall of Fame, built at a cost of more than $500,000, will house an “Honors Court” of plaques etched in native granite representing each of the 14 charter members, a “Museum of Wrestling History,” a library, a “Hall of Founders,” and a theater and lecture hall.

Keen is one of five to be honored for their legendary efforts in coaching and the others are the late Fendley Collins of Michigan State, Art Griffith of Oklahoma State, David McCuskey of Northern Iowa and Rex Peery of Pittsburgh.

Recognized for their contributions in the development of wrestling are Myron Roderick and Jack VanBebber of Oklahoma and Jay Evans and Dan Allen Hodge of Oklahoma.

Keen, of the grand group of Michigan coaches of the mid-century that includes the likes of Fritz Crisler, Ben Oosterbaan, Ray Fisher and Matt Mann, has been retired from coaching for about six years but still remains active in the wrestling supply business he founded,

Frank Gifford, ABC television sportscaster and the voice of wrestling at the 1972 and 1976 Olympic Games, will be the master of ceremonies at the enshrinement.