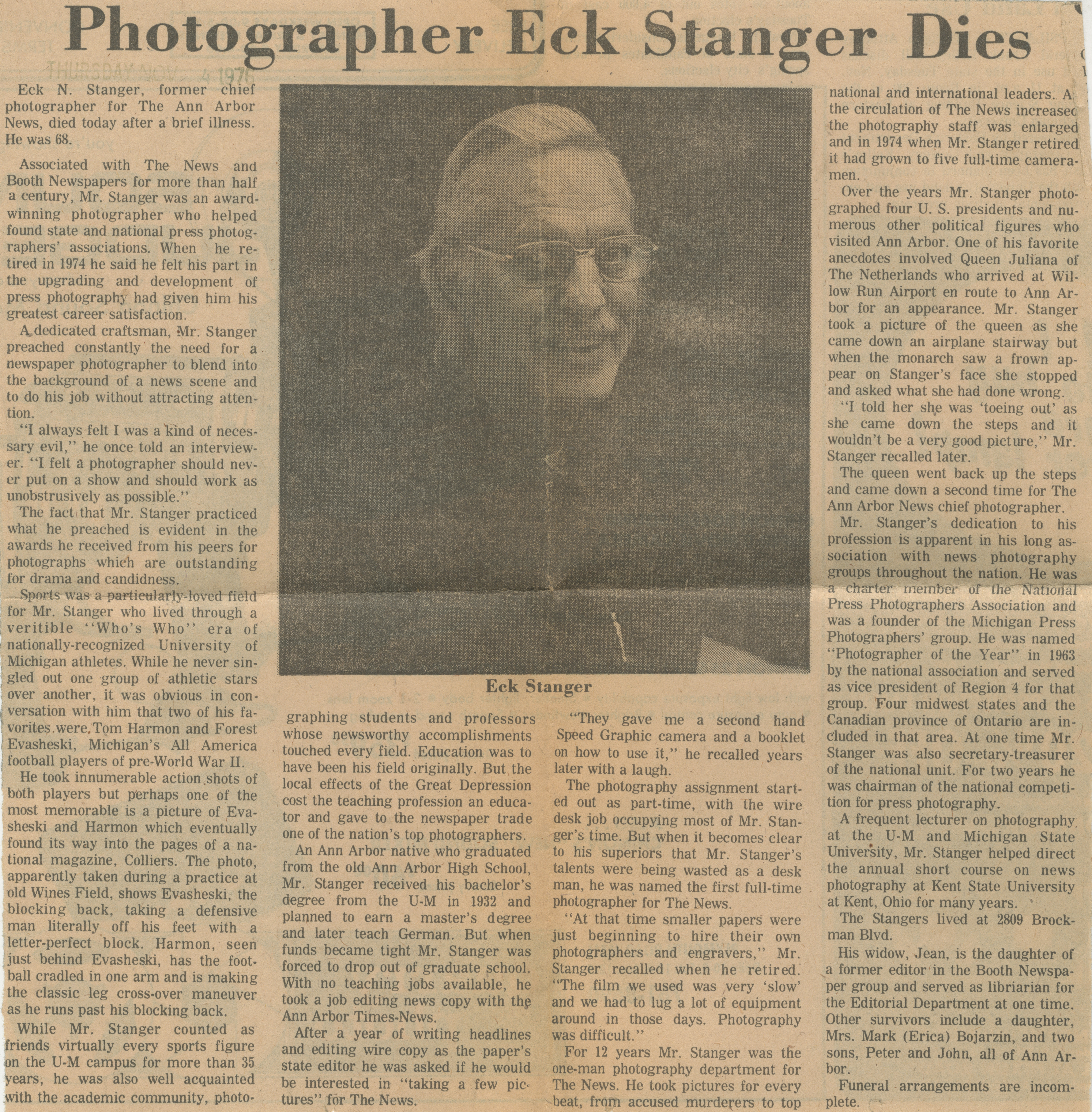 Eck N. Stanger, former photographer for The Ann Arbor News, died today after a brief illness. He was 68.

Associated with The News and Booth Newspapers for more than half a century, Mr. Stanger was an award-winning photographer who helped found state and national press photographers' associations. When he retired in 1974 he said he felt his part in the upgrading and development of press photography had given him his greatest career satisfaction.

A dedicated craftman, Mr. Stanger preached constantly the need for a newspaper photographer to blend into the background of a news scene and to do his job without attracting attention.

"I always felt I was a kind of necessary evil," he once told an interviewer. "I felt a photographer should never put on a show and should work as unobtrusively as possible."

The fact that Mr. Stanger practiced what he preached is evident in the awards he received from his peers for photographs which are outstanding for drama and candidness.

Sports was a particularly-loved field for Mr. Stanger who lived through a veritable "Who's Who" era of nationally-recognized University of Michigan athletes. While he never singled out one group of athletic stars over another, it was obvious in conversation with him that two of his favorites were Tom Harmon and Forest Evasheski, Michigan's All America football players of pre-World War II.

He took innumberable action of both players but perhaps one of the most memorable is a picture of Evasheski and Harmon which eventually found its way into the pages of a national magazine, Colliers. The photo, apparently taken during a practice at old Wines field, shows Evasheski, the blocking back, taking a defensive man literally off his feet with a letter-perfect block. Harmon, seen just behind Evasheski, has the football cradled in one arm and is making the classic leg cross-over maneuver as he runs past his blocking back.

While Mr. Stanger counted as friends virtually every sports figure on the U-M campus for more than 35 years, he was also well acquainted with the academic community, photographing students and professors whose noteworthy accomplishments touched every field. Education was to have been his field originally. But the local effects of the Great Depression cost the teaching profession an educator and gave the newspaper trade one of the nation's top photographers.

An Ann Arbor native who graduated from the old Ann Arbor High School, Mr. Stanger received his bachelor's degree from the U-M in 1932 and planned to earn a master's degree and later teach German. But when funds became tight Mr. Stanger was forced to drop out of graduate school. With no teaching jobs available, he took a job editing news copy with the Ann Arbor Times-News.

After a year of writing headlines and editing wire copy as the paper's state editor he was asked if he would be interested in "taking a few pictures" for The News.

"The gave me a second-hand Speed Graphic camera and a booklet on how to use it," he recalled years later with a laugh.

The photography assignment started out as part-time, with the wire desk job occupying most of Mr Stanger's time. But when it becomes clear to his superiors that Mr. Stanger's talents were being wasted as a desk man, he was named the photographer for The News.

"At that time smaller papers were just beginning to hire their own photographers and engravers," Mr. Stanger recalled when he retired. "The film we used was very "slow" and we had to lug a lot of equipment around in those days. Photography was difficult."

For 12 years Mr. Stanger was the one-man photography department for The News. He took pictures for every beat, from accused murderers to top national and international leaders. As the circulation of The News increased, the photography staff was enlarged and in 1974 when Mr. Stanger retired, it had grown to five full-time cameramen.

Over the years, Mr. Stanger photographed four U.S. presidents and numerous other political figures who visited Ann Arbor. One of his favorite anecdotes involved Queen Juilana of The Netherlands who arrived at Willow Run airport in route to Ann Arbor for an appearance. Mr. Stanger took a picture of the queen as she came down an airplane stairway but when the monarch saw a frown appear on Stanger's face, she stopped and asked what she had done wrong.

"I told her she was "toeing out" as she came down the steps and it wouldn't be a very good picture," Mr. Stanger recalled later.

The queen went back up the stairs and came down a second time for The Ann Arbor New chief photographer.

Mr. Stanger's dedication to his profession is apparent in his long association with news photography groups throughout the nation. He was a charter member of the National Photographers Association and was a founder of the Michigan Press Photographers' group. He was named "Photographer of the Year" in 1963 by the national association and served as vice president of Region 4 for that group. Four midwest states and the Canadian province of Ontario are included in that area. At one time Mr. Stanger was also secretary-treasurer of the national unit. For two years he was chairman of the national competition for press photography.

The Stangers lived at 2809 Brockman Blvd.

His widow Jean is the daughter of a former editor in the Booth Newspaper group and served as librarian for the Editorial Department at one time. Other survivors include a daughter, Mrs. Mark (Erica) Bojarzin, and two sons, Peter and John, all of Ann Arbor.