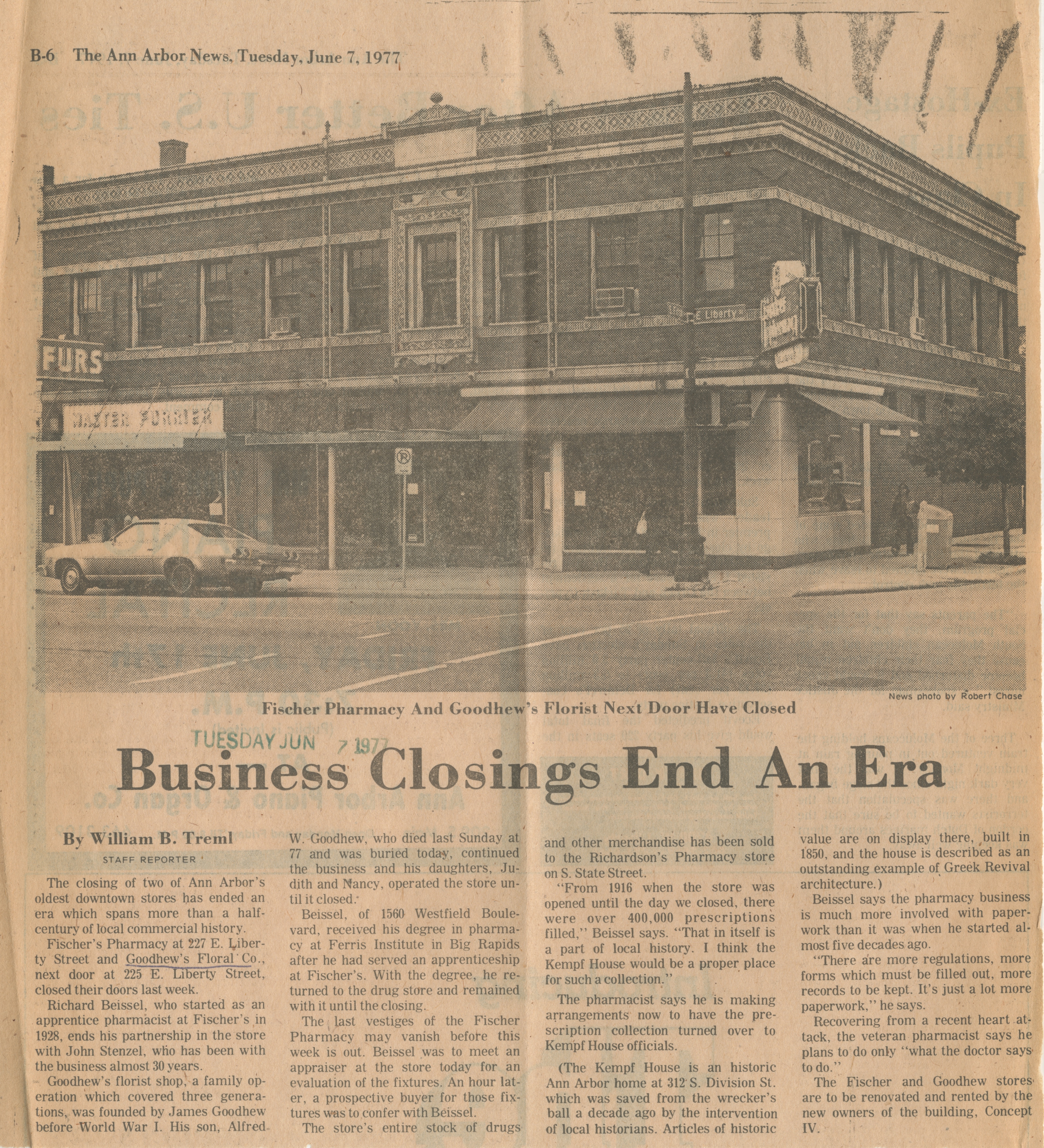 By William B. Treml
STAFF REPORTER

The closing of two of Ann Arbor’s oldest downtown stores has ended an era which spans more than a half-century of local commercial history.

Richard Beissel, who started as an apprentice pharmacist at Fischer’s in 1928, ends his partnership in the store with John Stenzel, who has been with the business almost 30 years.

Goodhew’s florist shop, a family operation which covered three generations, was founded by James Goodhew before World War I. His son, Alfred W. Goodhew, who died last Sunday at 77 and was buried today, continued the business and his daughters, Judith and Nancy, operated the store until it closed.

Beissel, of 1560 Westfield Boulevard, received his degree in pharmacy at Ferris Institute in Big Rapids after he had served an apprenticeship at Fischer’s. With the degree, he returned to the drug store and remained with it until the closing.

The last vestiges of the Fischer Pharmacy may vanish before this week is out. Beissel was to meet an appraiser at the store today for an evaluation of the fixtures. An hour later, a prospective buyer for those fixtures was to confer with Beissel.

The store’s entire stock of drugs and other merchandise has been sold to the Richardson’s Pharmacy store on S. State Street.

“From 1916 when the store was opened until the day we closed, there were over 400,000 prescriptions filled,” Beissel says. “That in itself is a part of local history. I think the Kempf House would be a proper place for such a collection.”

The pharmacist says he is making arrangements now to have the prescription collection turned over to Kempf House officials.

(The Kempf House is an historic Ann Arbor home at 312 S. Division St. which was saved from the wrecker’s ball a decade ago by the intervention of local historians. Articles of historic value are on display there, built in 1850, and the house is described as an outstanding example of Greek Revival architecture.)

Beissel says the pharmacy business is much more involved with paperwork than it was when he started almost five decades ago.

“There are more regulations, more forms which must be filled out, more records to be kept. It’s just a lot more paperwork," he says.

Recovering from a recent heart attack, the veteran pharmacist says he plans to do only “what the doctor says to do.”

The Fischer and Goodhew stores are to be renovated and rented by the new owners of the building, Concept IV.