An Interesting Reading Of Shaw 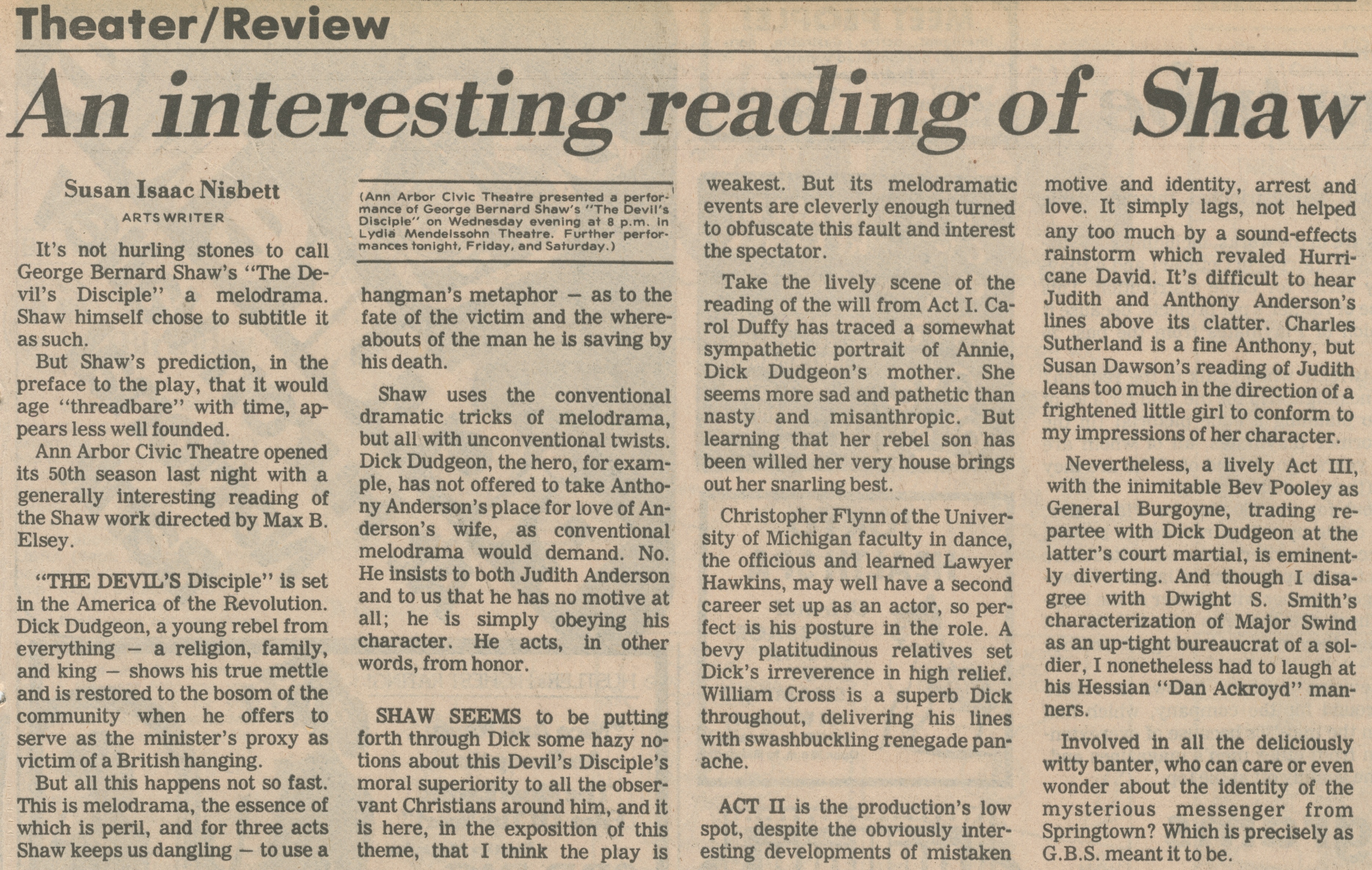 An interesting reading of Shaw

It’s not hurling stones to call George Bernard Shaw’s “The Devil’s Disciple” a melodrama. Shaw himself chose to subtitle it as such.

But Shaw’s prediction, in the preface to the play, that it would age “threadbare” with time, appears less well founded.

“THE DEVIL’S Disciple” is set in the America of the Revolution. Dick Dudgeon, a young rebel from everything - a religion, family, and king - shows his true mettle and is restored to the bosom of the community when he offers to serve as the minister’s proxy as victim of a British hanging.

But all this happens not so fast. This is melodrama, the essence of which is peril, and for three acts Shaw keeps us dangling - to use a hangman’s metaphor - as to the fate of the victim and the whereabouts of the man he is saving by his death.

Shaw uses the conventional dramatic tricks of melodrama, but all with unconventional twists. Dick Dudgeon, the hero, for example, has not offered to take Anthony Anderson’s place for love of Anderson’s wife, as conventional melodrama would demand. No. He insists to both Judith Anderson and to us that he has no motive at all; he is simply obeying his character. He acts, in other words, from honor.

SHAW SEEMS to be putting forth through Dick some hazy notions about this Devil’s Disciple’s moral superiority to all the observant Christians around him, and it is here, in the exposition of this theme, that I think the play is weakest. But its melodramatic events are cleverly enough turned to obfuscate this fault and interest the spectator.

Take the lively scene of the reading of the will from Act I. Carol Duffy has traced a somewhat sympathetic portrait of Annie, Dick Dudgeon’s mother. She seems more sad and pathetic than nasty and misanthropic. But learning that her rebel son has been willed her very house brings out her snarling best.

Christopher Flynn of the University of Michigan faculty in dance, the officious and learned Lawyer Hawkins, may well have a second career set up as an actor, so perfect is his posture in the role. A bevy platitudinous relatives set Dick’s irreverence in high relief. William Cross is a superb Dick throughout, delivering his lines with swashbuckling renegade panache.

ACT II is the production’s low spot, despite the obviously interesting developments of mistaken motive and identity, arrest and love. It simply lags, not helped any too much by a sound-effects rainstorm which revealed Hurricane David. It’s difficult to hear Judith and Anthony Anderson’s lines above its clatter. Charles Sutherland is a fine Anthony, but Susan Dawson’s reading of Judith leans too much in the direction of a frightened little girl to conform to my impressions of her character.

Nevertheless, a lively Act III, with the inimitable Bev Pooley as General Burgoyne, trading repartee with Dick Dudgeon at the latter’s court martial, is eminently diverting. And though I disagree with Dwight S. Smith’s characterization of Major Swind as an up-tight bureaucrat of a soldier, I nonetheless had to laugh at his Hessian “Dan Ackroyd” manners.

Involved in all the deliciously witty banter, who can care or even wonder about the identity of the mysterious messenger from Springtown? Which is precisely as G.B.S. meant it to be.