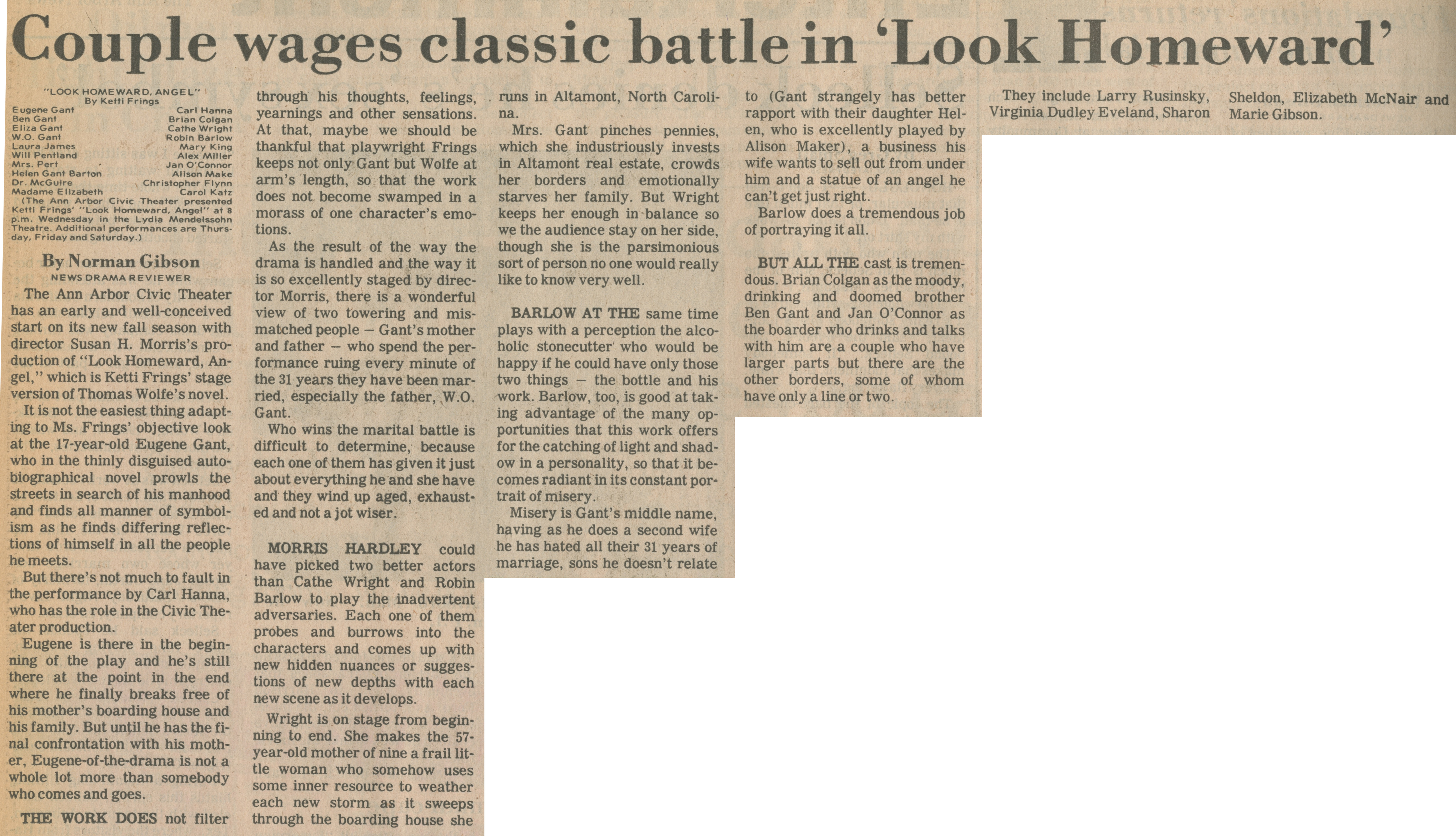 The Ann Arbor Civic Theater has an early and well-conceived start on its new fall season with director Susan H. Morris’s production of “Look Homeward, Angel,” which is Ketti Frings’ stage version of Thomas Wolfe’s novel.

It is not the easiest thing adapting to Ms. Frings’ objective look at the 17-year-old Eugene Gant, who in the thinly disguised autobiographical novel prowls the streets in search of his manhood and finds all manner of symbolism as he finds differing reflections of himself in all the people he meets.

But there’s not much to fault in the performance by Carl Hanna, who has the role in the Civic Theater production.

Eugene is there in the beginning of the play and he’s still there at the point in the end where he finally breaks free of his mother’s boarding house and his family. But until he has the final confrontation with his mother, Eugene-of-the-drama is not a whole lot more than somebody who comes and goes.

THE WORK DOES not filter through his thoughts, feelings, yearnings and other sensations. At that, maybe we should be thankful that playwright Frings keeps not only Gant but Wolfe at arm’s length, so that the work does not become swamped in a morass of one character’s emotions.

As the result of the way the drama is handled and the way it is so excellently staged by director Morris, there is a wonderful view of two towering and mismatched people - Gant’s mother and father - who spend the performance ruing every minute of the 31 years they have been married, especially the father, W.O. Gant.

Who wins the marital battle is difficult to determine, because each one of them has given it just about everything he and she have and they wind up aged, exhausted and not a jot wiser.

MORRIS HARDLEY could have picked two better actors than Cathe Wright and Robin Barlow to play the inadvertent adversaries. Each one of them probes and burrows into the characters and comes up with new hidden nuances or suggestions of new depths with each new scene as it develops.

Wright is on stage from beginning to end. She makes the 57-year-old mother of nine a frail little woman who somehow uses some inner resource to weather each new storm as it sweeps through the boarding house she runs in Altamont, North Carolina.

Mrs. Gant pinches pennies, which she industriously invests in Altamont real estate, crowds her borders and emotionally starves her family. But Wright keeps her enough in balance so we the audience stay on her side, though she is the parsimonious sort of person no one would really like to know very well.

BARLOW AT THE same time plays with a perception the alcoholic stonecutter' who would be happy if he could have only those two things - the bottle and his work. Barlow, too, is good at taking advantage of the many opportunities that this work offers for the catching of light and shadow in a personality, so that it becomes radiant in its constant portrait of misery.

Misery is Gant’s middle name, having as he does a second wife he has hated all their 31 years of marriage, sons he doesn’t relate to (Gant strangely has better rapport with their daughter Helen, who is excellently played by Alison Maker), a business his wife wants to sell out from under him and a statue of an angel he can’t get just right.

Barlow does a tremendous job of portraying it all.

BUT ALL THE cast is tremendous. Brian Colgan as the moody, drinking and doomed brother Ben Gant and Jan O’Connor as the boarder who drinks and talks with him are a couple who have larger parts but there are the other borders, some of whom have only a line or two.