She's not just 'some chick' from the Teamsters Union 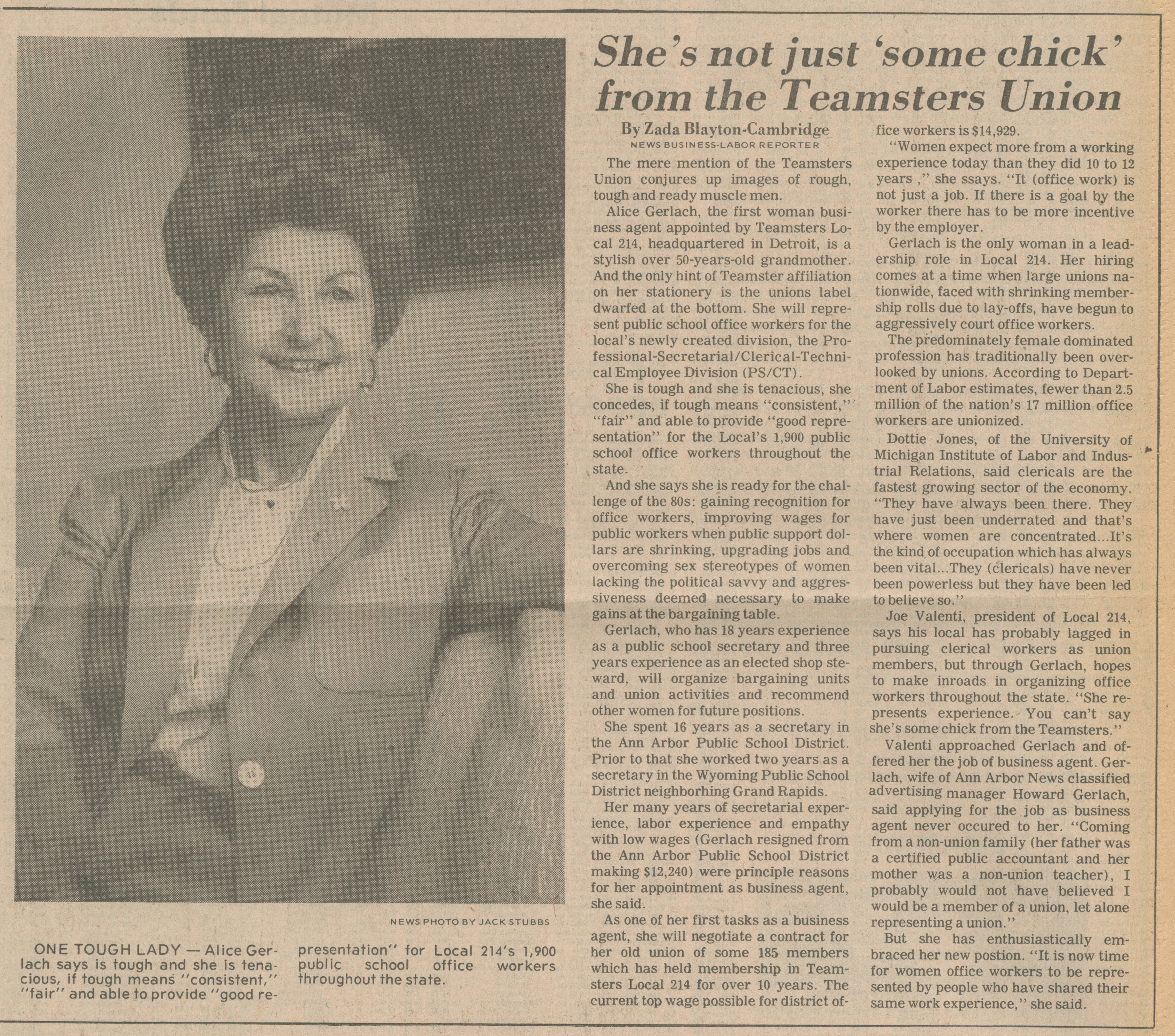 ﻿ONE TOUGH LADY — Alice Gerlach says is tough and she is tenacious, if tough means "consistent,” "fair" and able to provide " good representation" for Local 214's 1,900 public school office workers throughout the state.

She's not just ‘some chick’ from the Teamsters Union

The mere mention of the Teamsters Union conjures up images of rough, tough and ready muscle men.

Alice Gerlach, the first woman business agent appointed by Teamsters Local 214, headquartered in Detroit, is a stylish over 50-years-old grandmother. And the only hint of Teamster affiliation on her stationery is the unions label dwarfed at the bottom. She will represent public school office workers for the local’s newly created division, the Professional-Secretarial/Clerical-Technical Employee Division (PS/CT).

She is tough and she is tenacious, she concedes, if tough means “consistent,” “fair” and able to provide “good representation” for the Local’s 1,900 public school office workers throughout the state.

And she says she is ready for the challenge of the 80s: gaining recognition for office workers, improving wages for public workers when public support dollars are shrinking, upgrading jobs and overcoming sex stereotypes of women lacking the political savvy and aggressiveness deemed necessary to make gains at the bargaining table.

Her many years of secretarial experience, labor experience and empathy with low wages (Gerlach resigned from the Ann Arbor Public School District making $12,240) were principle reasons for her appointment as business agent, she said.

As one of her first tasks as a business agent, she will negotiate a contract for her old union of some 185 members which has held membership in Teamsters Local 214 for over 10 years. The current top wage possible for district office workers is $14,929.

“Women expect more from a working experience today than they did 10 to 12 years," she ssays. “It (office work) is not just a job. If there is a goal by the worker there has to be more incentive by the employer.

Gerlach is the only woman in a leadership role in Local 214. Her hiring comes at a time when large unions nationwide, faced with shrinking membership rolls due to lay-offs, have begun to aggressively court office workers.

The predominately female dominated profession has traditionally been overlooked by unions. According to Department of Labor estimates, fewer than 2.5 million of the nation’s 17 million office workers are unionized.

Dottie Jones, of the University of Michigan Institute of Labor and Industrial trial Relations, said clericals are the fastest growing sector of the economy. “They have always been there. They have just been underrated and that’s where women are concentrated...It’s the kind of occupation which has always been vital...They (clericals) have never been powerless but they have been led to believe so.”

Joe Valenti, president of Local 214, says his local has probably lagged in pursuing clerical workers as union members, but through Gerlach, hopes to make inroads in organizing office workers throughout the state. “She represents experience. You can’t say she’s some chick from the Teamsters.”

Valenti approached Gerlach and offered her the job of business agent. Gerlach, wife of Ann Arbor News classified advertising manager Howard Gerlach, said applying for the job as business agent never occured to her. “Coming from a non-union family (her father was a certified public accountant and her mother was a non-union teacher), I probably would not have believed I would be a member of a union, let alone representing a union.”

But she has enthusiastically embraced her new postion. “It is now time for women office workers to be represented by people who have shared their same work experience,” she said.