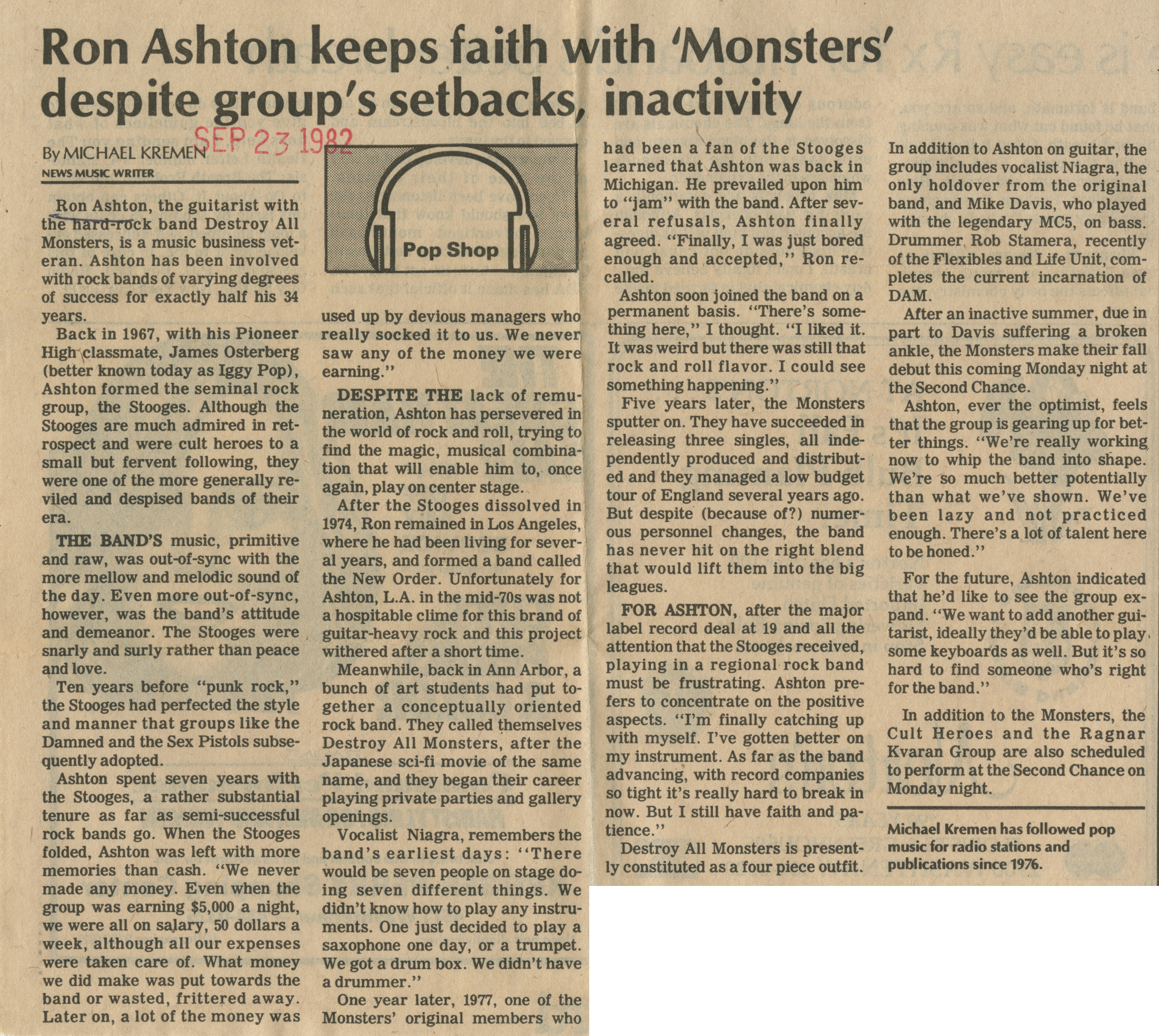 Ron Ashton, the guitarist with the hard-rock band Destroy All Monsters, is a music business veteran. Ashton has been involved with rock bands of varying degrees of success for exactly half his 34 years.

Back in 1967, with his Pioneer High classmate, James Osterberg (better known today as Iggy Pop), Ashton formed the seminal rock group, the Stooges. Although the Stooges are much admired in retrospect and were cult heroes to a small but fervent following, they were one of the more generally reviled and despised bands of their era.

THE BAND'S music, primitive and raw, was out-of-sync with the more mellow and melodic sound of the day. Even more out-of-sync, however, was the band's attitude and demeanor. The Stooges were snarly and surly rather than peace and love.

Ten years before "punk rock," the Stooges had perfected the style and manner that groups like the Damned and the Sex Pistols subsequently adopted.

Ashton spent seven years with the Stooges, a rather substantial tenure as far as semi-successful rock bands go. When the Stooges folded, Ashton was left with more memories than cash. "We never made any money. Even when the group was earning $5,000 a night, we were all on salary, 50 dollars a week, although all our expenses were taken care of. What money we did make was put towards the band or wasted, frittered away. Later on, a lot of the money was used up by devious managers who really socked it to us. We never saw any of the money we were earning."

DESPITE THE lack of remuneration, Ashton has persevered in the world of rock and roll, trying to find the magic, musical combination that will enable him to, once again, play on center stage.

After the Stooges dissolved in 1974, Ron remained in Los Angeles, where he had been living for several years, and formed a band called the New Order. Unfortunately for Ashton, L.A. in the mid-70s was not a hospitable clime for this brand of guitar-heavy rock and this project withered after a short time.

Meanwhile, back in Ann Arbor, a bunch of art students had put together a conceptually oriented rock band. They called themselves Destroy All Monsters, after the Japanese sci-fi movie of the same name, and they began their career playing private parties and gallery openings.

Vocalist Niagra, remembers the band's earliest days: "There would be seven people on stage doing seven different things. We didn't know how to play any instruments. One just decided to play a saxophone one day, or a trumpet. We got a drum box. We didn't have a drummer."

One year later, 1977, one of the Monsters' original members who had been a fan of the Stooges learned that Ashton was back in Michigan. He prevailed upon him to "jam" with the band. After several refusals, Ashton finally agreed. "Finally, I was just bored enough and accepted," Ron recalled.

Ashton soon joined the band on a permanent basis. "There's something here," I thought. "I liked it. It was weird but there was still that rock and roll flavor. I could see something happening."

Five years later, the Monsters sputter on. They have succeeded in releasing three singles, all independently produced and distributed and they managed a low budget tour of England several years ago. But despite "because of?) numerous personnel changes, the band has never hit on the right blend that would lift them into the big leagues.

FOR ASHTON, after the major label record deal at 19 and all the attention that the Stooges received, playing in a regional rock band must be frustration. Ashton prefers to concentrate on the positive aspects. "I'm finally catching up with myself. I've gotten better on my instrument. As far as the band advancing, with record companies so tight it's really hard to break in now. But I still have faith and patience."

Destroy All Monsters is presently constituted as a four piece outfit. In addition to Ashton on guitar, the group includes vocalist Niagra, the only holdover from the original band, and Mike Davis, who played with the legendary MC5, on bass. Drummer Rob Stamera, recently of the Flexibles and Life Unit, completes the current incarnation of DAM.

After an inactive summer, due in part to Davis suffering a broken ankle, the Monsters make their fall debut this coming Monday night at the Second Chance.

Ashton, ever the optimist, feels that the group is gearing up for better things. "We're really working now to whip the band into shape. We're so much better potentially than what we've shown. We've been lazy and not practiced enough. There's a lot of talent here to be honed."

For the future, Ashton indicated that he'd like to see the group expand. "We want to add another guitarist, ideally they'd be able to play some keyboards as well. But it's so hard to find someone who's right for the band."

In addition to the Monsters, the Cult Heroes and the Ragnar Kvaran Group are also scheduled to perform at the Second Chance on Monday night.

Michael Kremen has followed pop music for radio stations and publications since 1976.