Ann Arbor theater...something for everyone 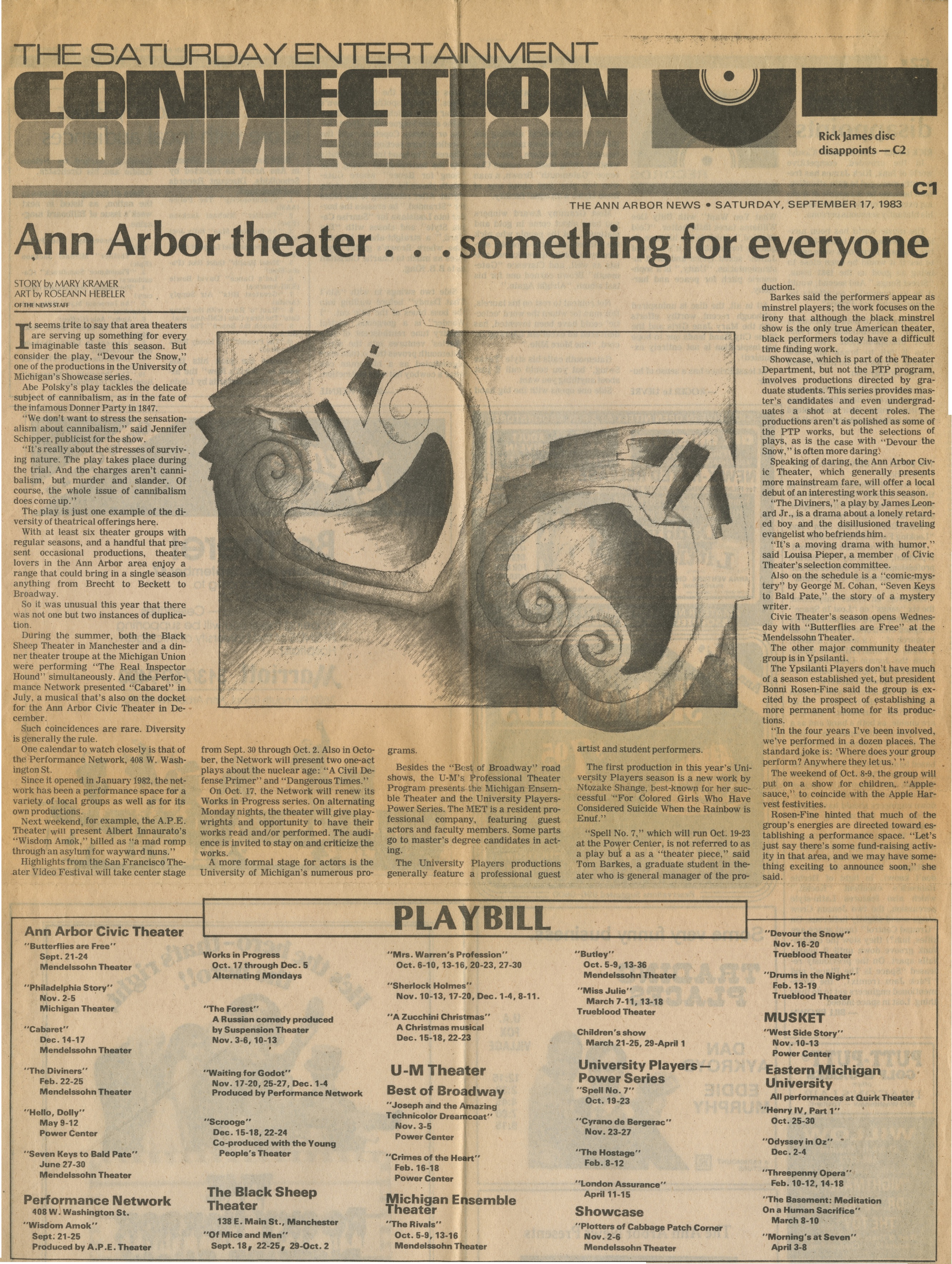 ﻿Ann Arbor theater...something for everyone

It seems trite to say that area theaters are serving up something for every imaginable test this season. But consider the play, "Devour the Snow," one of the productions in the University of Michigan's Showcase series.

Abe Polsky's play tackles the delicate subject of cannibalism, as in the fate of the infamous Donner Party in 1847.

"We don't want to stress the sensationalism about cannibalism," said Jennifer Schipper, publicist for the show.

"It's really about the stresses of surviving nature. The play takes place during a trial. And the charges aren't cannibalism, but murder and slander. Of course, the whole issue of cannibalism does come up."

The play is just one example of the diversity of theatrical offerings here.

With at least six theater groups with regular seasons, and a handful that present occasional productions, theater lovers in the Ann Arbor area enjoy a range that could bring in a single season anything from Brecht to Beckett to Broadway.

So it was unusual this year that there was not one but two instances of duplication this year.

During the summer, both the Black Sheep Theater in Manchester and a dinner theater troupe at the Michigan Union were performing "The Real Inspector Hound" simultaneously. And the Performance Network presented "Cabaret" in July, a musical that's also on the docket for the Ann Arbor Civic Theater in December.

Such coincidences are rare. Diversity is generally the rule.

One calendar to watch closely is that of the Performance Network, 408 W. Washington St.

Since it opened in January 1982, the network has been a performance space for a variety of local groups as well as for its own productions.

Next weekend, for example, the A.P.E. Theater will present Albert Innaurato's "Wisdom Amok," billed as "a mad romp through an asylum for wayward nuns."

Highlights from the San Francisco Theater Video Festival will take center stage from Sept. 30 through Oct. 2. Also in October, the Network will present two one-act plays about the nuclear age: "A Civil Defense Primer" and "Dangerous Times."

On Oct. 17, the Network will renew its Works in Progress series. On alternating Monday nights, the theater will give playwrights an opportunity to have their works read and/or performed. The audience is invited to stay on and criticize the works.

A more formal stage for actors is the University of Michigan's numerous programs.

The very first production in this year's University Players season is a new work by Ntozake Shange, best-known for her successful "For Colored Girls Who Have Considered Suicide When the Rainbow is Enuf."

"Spell No. 7," which will run Oct. 19-23 at the Power Center, is not referred to as a play, but as a "theater piece," said Tom Barkes, a graduate student in the theater who is general manager of the production.

Barkes said the performers appear as minstrel players; the work focuses on the irony that although the black minstrel show is the only true American theater, black performers today have a difficult time finding work.

Showcase, which is part of the Theater Department, but not the PTP program, involves productions directed by graduate students. This series provides master's candidates and even undergraduates a shot at decent roles. The productions aren't as polished as some of the PTP works, but the selections of plays, as is the case with "Devour the Snow," is often more daring.

Speaking of daring, the Ann Arbor Civic Theater, which generally presents more mainstream fare, will offer a local debut of an interesting work this season.

"The Diviners," a play by James Leonard, Jr., is a drama about a lonely retarted boy and the disillusioned traveling evangelist who befriends him.

"It's a moving drama with humor," said Louisa Pieper, a member of Civic Theater's selection committee.

Also on the schedule is a "comic-master" by George M. Cohan, "Seven Keys to Bald Pate," the story of a mystery writer.

Civic Theater's season opens Wednesday with "Butterflies are Free" at the Mendelssohn Theater.

The other major community theater group is in Ypsilanti.

The Ypsilanti Players don't have much of a season established yet, but the president Bonni Rosen-Fine said the group is excited by the prospect of establishing a more permanent home for its productions.

"In the four years I've been involved, we've performed in a dozen places. The standard joke is: 'Where does you group perform? Anywhere they let us.' "

The weekend of Oct. 8-9, the group will put on a show for children, "Applesauce," to coincide with the Apple Harvest festivities.

Rosen-Fine hinted that much of the group's energies are directed towards establishing a performance space. "Let's just say there's some fund-raising activity in that area, and we may have something exciting to announce soon," she said.