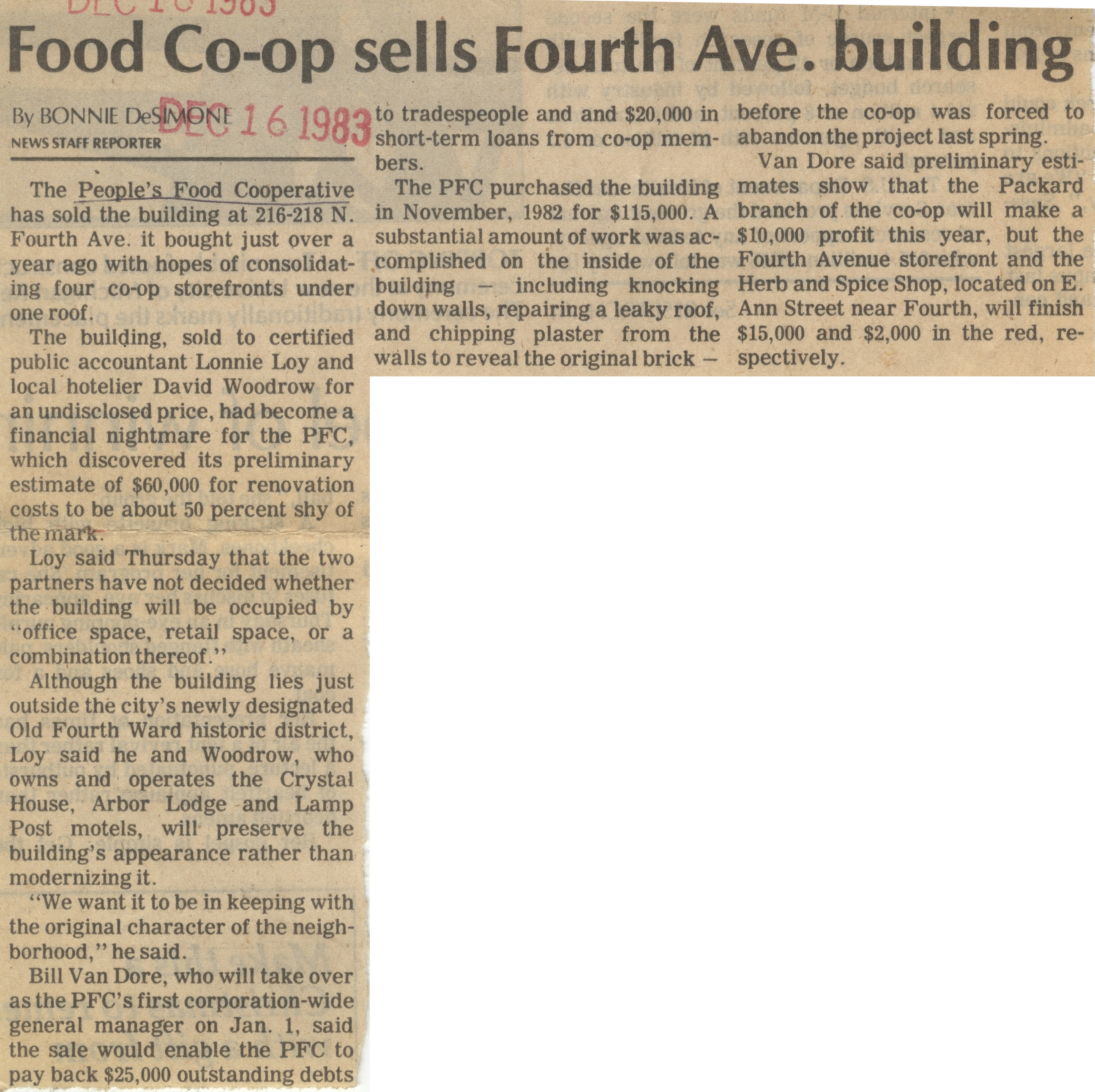 ﻿L-'Lv-' x<br><br>Food Co-op sells Fourth Ave. building<br><br>By BONNIE DeS$^pWl j A ]QOQto tradespeople and and $20,000 in nfws staff reporter ' short-term loans from co-op mem-<br><br>--------:------------------------ bers.<br><br>The People’s Food Cooperative The PFC purchased the building has soid the building at 216-218 N. in November, 1982 for $115,000. A Fourth Ave. it bought just over a substantial amount of work was ac-year ago with hopes of consolidat- complished on the inside of the ing four co-op storefronts under buildjng - including knocking one roof. down walls, repairing a leaky roof,<br><br>The building, sold to certified and chipping plaster from the public accountant Lonnie Loy and walls to reveal the original brick -local hotelier David Woodrow for an undisclosed price, had become a financial nightmare for the PFC, which discovered its preliminary estimate of $60,000 for renovation costs to be about 50 percent shy of the martc Loy said Thursday that the two partners have not decided whether the building will be occupied by "office space, retail space, or a combination thereof .”<br><br>Although the building lies just outside the city’s newly designated Old Fourth Ward historic district,<br><br>I/)y said he and Woodrow, who owns and operates the Crystal House, Arbor Lodge and Lamp Post motels, will preserve the building’s appearance rather than modernizing it.<br><br>“We want it to be in keeping with the original character of the neighborhood,” he said.<br><br>Bill Van Dore, who will take over as the PFC’s first corporation-wide general manager on Jan. 1, said the sale would enable the PFC to<br><br>before the co-op was forced to abandon the project last spring.<br><br>Van Dore said preliminary estimates show that the Packard branch of the co-op will make a $10,000 profit this year, but the Fourth Avenue storefront and the Herb and Spice Shop, located on E. Ann Street near Fourth, will finish $15,000 and $2,000 in the red, respectively.