Grass roots theater: the point is the doing, not the watching 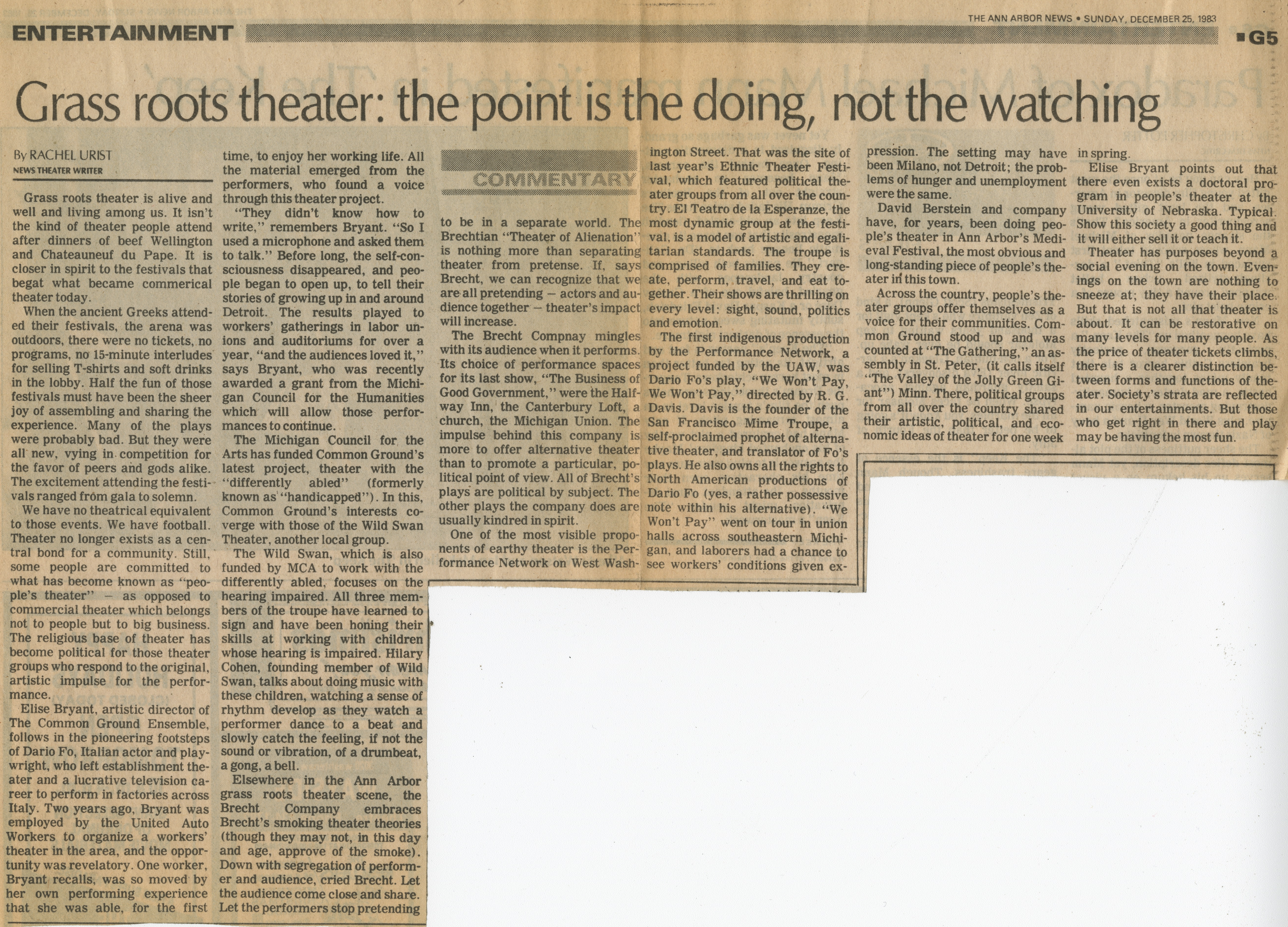 Grass roots theater: the point is the doing, not the watching

Grass roots theater is alive and well and living among us. It isn’t the kind of theater people attend after dinners of beef Wellington and Chateauneuf du Pape. It is closer in spirit to the festivals that begat what became commercial theater today.

When the ancient Greeks attended their festivals, the arena was outdoors, there were no tickets, no programs, no 15-minute interludes for selling T-shirts and soft drinks in the lobby. Half the fun of those festivals must have been the sheer joy of assembling and sharing the experience. Many of the plays were probably bad. But they were all new, vying in competition for the favor of peers and gods alike. The excitement attending the festivals ranged from gala to solemn.

We have no theatrical equivalent to those events. We have football. Theater no longer exists as a central bond for a community. Still, some people are committed to what has become known as ‘‘people’s theater” – as opposed to commercial theater which belongs not to people but to big business. The religious base of theater has become political for those theater groups who respond to the original, artistic impulse for the performance.

Elise Bryant, artistic director of The Common Ground Ensemble, follows in the pioneering footsteps of Dario Fo, Italian actor and playwright, who left establishment theater and a lucrative television career to perform in factories across Italy. Two years ago. Bryant was employed by the United Auto Workers to organize a workers' theater in the area, and the opportunity was revelatory. One worker. Bryant recalls, was so moved by her own performing experience that she was able, for the first time, to enjoy her working life. All the material emerged from the performers, who found a voice through this theater project.

“They didn’t know how to write," remembers Bryant. “So I used a microphone and asked them to talk." Before long, the self-consciousness disappeared, and people began to open up, to tell their stories of growing up in and around Detroit. The results played to workers’ gatherings in labor unions and auditoriums for over a year, “and the audiences loved it,” says Bryant, who was recently awarded a grant from the Michigan Council for the Humanities which will allow those performances to continue.

The Michigan Council for the Arts has funded Common Ground’s latest project, theater with the “differently abled” (formerly known as “handicapped”). In this, Common Ground’s interests converge with those of the Wild Swan Theater, another local group.

The Wild Swan, which is also funded by MCA to work with the differently abled. focuses on the hearing impaired. All three members of the troupe have learned to sign and have been honing their skills at working with children whose hearing is impaired. Hilary Cohen, founding member of Wild Swan, talks about doing music with these children, watching a sense of rhythm develop as they watch a performer dance to a beat and slowly catch the feeling, if not the sound or vibration, of a drumbeat, a gong, a bell.

Elsewhere in the Ann Arbor grass roots theater scene, the Brecht Company embraces Brecht’s smoking theater theories (though they may not, in this day and age. approve of the smoke). Down with segregation of performer and audience, cried Brecht. Let the audience come close and share. Let the performers stop pretending to be in a separate world. The Brechtian “Theater of Alienation' is nothing more than separating theater from pretense. If, says Brecht, we can recognize that we are all pretending – actors and audience together – theater’s impact will increase.

The Brecht Company mingles with its audience when it performs. Its choice of performance spaces for its last show, “The Business of Good Government,” were the Halfway Inn. the Canterbury Loft, a church, the Michigan Union. The impulse behind this company is more to offer alternative theater than to promote a particular, political point of view. All of Brecht’s plays' are political by subject. The other plays the company does are usually kindred in spirit.

One of the most visible proponents of earthy theater is the Performance Network on West Washington Street. That was the site of last year’s Ethnic Theater Festival. which featured political theater groups from all over the country. El Teatro de la Esperanze, the most dynamic group at the festival. is a model of artistic and egalitarian standards. The troupe is comprised of families. They create. perform, travel, and eat together. Their shows are thrilling on every level: sight, sound, politics and emotion.

The first indigenous production by the Performance Network, a project funded by the UAW, was Dario Fo’s play, “We Won’t Pay. We Won’t Pay,” directed by R. G. Davis. Davis is the founder of the San Francisco Mime Troupe, a self-proclaimed prophet of alternative theater, and translator of Fo’s plays. He also owns all the rights to North American productions of Dario Fo (yes, a rather possessive note within his alternative). “We Won’t Pay” went on tour in union halls across southeastern Michigan, and laborers had a chance to see workers’ conditions given expression. The setting may have been Milano, not Detroit; the problems of hunger and unemployment were the same.

Across the country, people’s theater groups offer themselves as a voice for their communities. Common Ground stood up and was counted at “The Gathering,” an assembly in St. Peter, (it calls itself “The Valley of the Jolly Green Giant”) Minn. There, political groups from all over the country shared their artistic, political, and economic ideas of theater for one week in spring.

Elise Bryant points out that there even exists a doctoral program in people’s theater at the University of Nebraska. Typical Show this society a good thing and it will either sell it or teach it.

Theater has purposes beyond a social evening on the town. Evenings on the town are nothing to sneeze at; they have their place. But that is not all that theater is about. It can be restorative on many levels for many people. As the price of theater tickets climbs, there is a clearer distinction between forms and functions of theater. Society’s strata are reflected in our entertainments. But those who get right in there and play may be having the most fun.