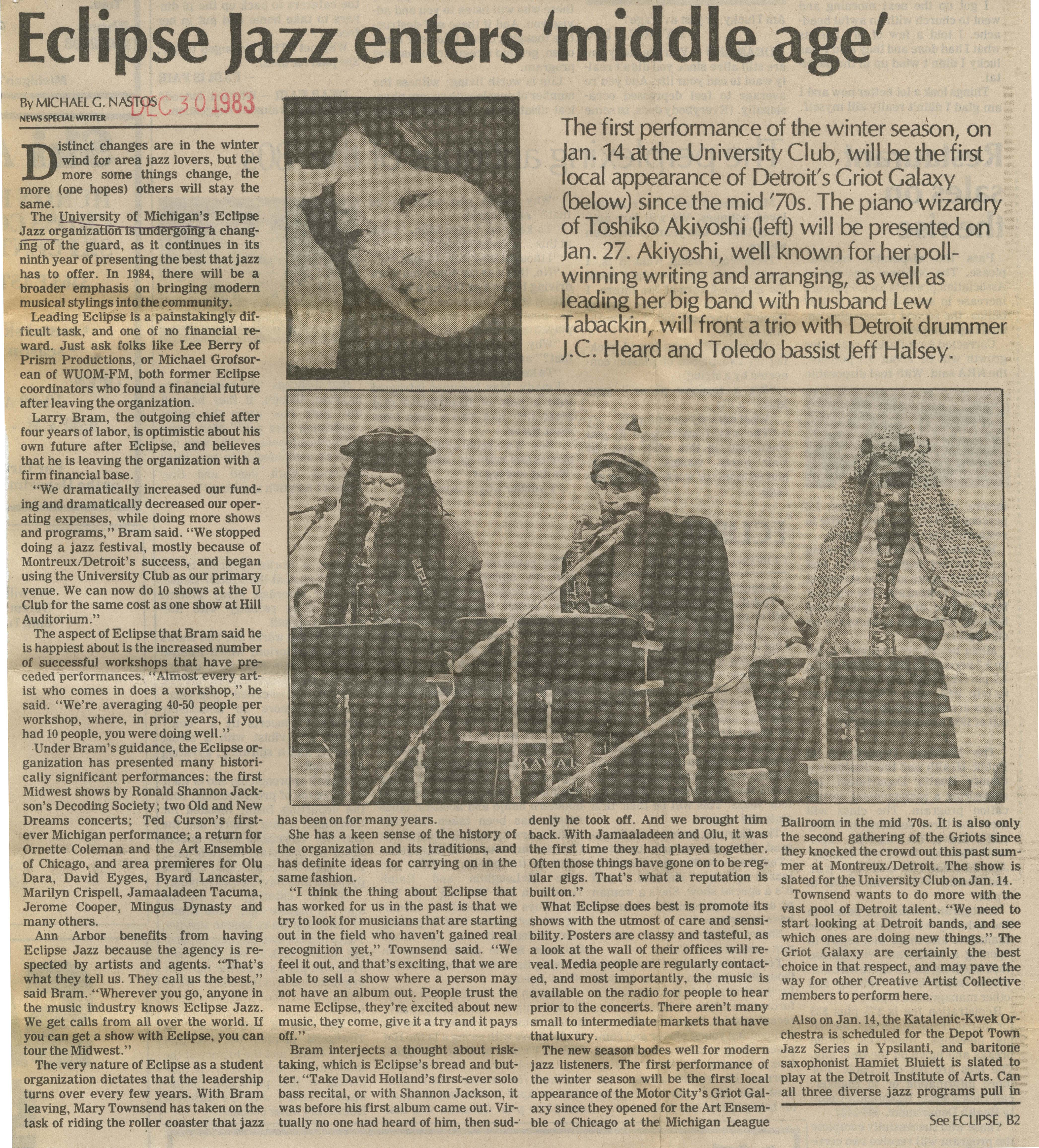 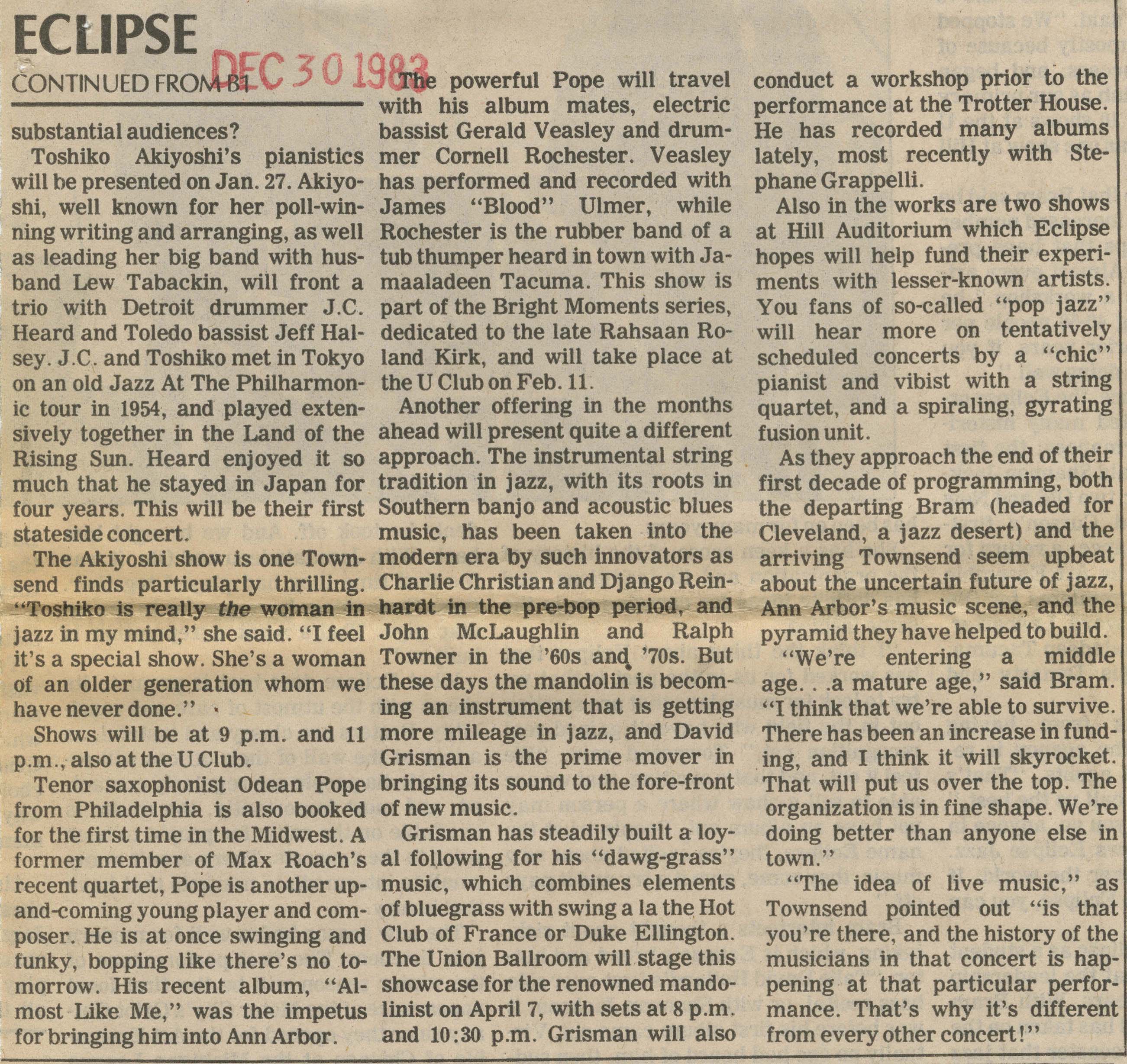 Distinct changes are in the winter
wind for area jazz lovers, but the
more some things change, the
more (one hopes) others will stay the
same.
Ja;~~~E~=
£ngor the guard, as it continues In Us
ninth year of presenting the best that jazz
has to offer. In 1984, there will be a
broader emphasis on bringing modern
musical stylings into the C!ltllRiunlty.
Leading Eclipse is a painstakingly dif·
ficult task, and one of no financial reward.
Just ask folks like Lee Berry of
Prism Productions, or Michael Grofsorean
of WUOM·FM, both former Eclipse
coordinators who found a financial future
after leaving the organization.
Larry Bram, the outgoing chief after
four years of labor, is optimistic about his
own future after Eclipse, and believes
that he is leaving the organization with a
firm financial base.
"We dramatically increased our fund·
ing and dramatically decreased our oper·
ating expenses, while doing more shows
and programs," Bram said. "We stopped
doing a jazz festival, mostly because of
Montreux/Detroit's success, and began
using the University Club as our primary
venue. We can now do 10 shows at the U
Club for the same cost as one show at Hill
Auditorium."
The aspect of Eclipse that Bram said he
is happiest about is the increased number
of successful workshops that have preceded
performances. •tAlmost-every art·
ist who comes in does a workshop," he
said. "We're averaging 40-50 people per
workshop, where, in prior years, U you
had 10 people, you were doing well.''
Under Bram'sguidance, the Eclipse or·
ganization has presented many bistori·
ca\ly significant performances: the first
Midwest shows by Ronald Shannon Jack·
son's Decoding Society; two Old and New
Dreams concerts; Ted Curson's first·
ever Michigan performance; a return for
Ornette Coleman and the Art Ensemble
of Chicago, and area premieres for Olu
Dara, David Eyges, Byard Lancaster,
Marilyn Crispell, Jamaaladeen Tacuma,
Jerome Cooper, Mingus Dynasty and
many others.
Ann Arbor benefits from having
Eclipse Jazz because the agency is respected
by artists and agents. "That's
what they tell us. They call us the best,"
said Bram. "Wherever you go, anyone in
the music industry knows Eclipse Jazz.
We get calls from all over the world. If
you can get a show with Eclipse, you can
tour the Midwest."
The very nature of Eclipse as a student
organization dictates that the leadership
turns over every few years. With Bram
leaving, Mary Townsend has taken on the
task of riding the roller coaster that jazz
has been on for many years.
She has a keen sense of the history of
the organization and its traditions, and
has definite ideas for carrying on in the
same fashion.
"I think the thing about Eclipse that
has worked for us in the past is that we
try to look for musicians that are starting
out in the field who haven't gained real
recognition yet," Townsend said. "We
feel it out, and that'sexciting, that we are
able to sell a show where a person may
not have an album out. People trust the
name Eclipse, they're excited about new
music, they come, give it a try and it pays
off."
Bram interjects a thought about risk·
taking, which is Eclipse's bread and butter.
"Take David Holland's first-ever solo
bass recital, or with Shannon Jackson, it
was before his first album came out. Virtually
no one had heard of him, then sud-·
The first perfonnance of the winter sea5on, on
Jan. 14 at the University Club, will be the first
local appearance of Detroit's Griot Galaxy
(below) since the mid '70s. The piano wizardry
ofT osh iko Akiyoshi (left) will be presented on
Jan. 27. Akiyoshi, well known for her pollwinning
writing and arranging, as well as
leading her big band with husband Lew
T abackin, will front a trio with Detroit drummer
J.C. Heard and Toledo bassist Jeff Halsey.
denly he took off. And we brought him
back. With Jamaaladeen and Olu, it was
tbe first time they bad played together.
Often those things have gone on to be reg·
ular gigs. That's what a reputation Is
built on."
What Eclipse does best is promote its
shows with the utmost of care and sensi·
bility. Posters are classy and tasteful, as
a look at the wall of their offices will reveal.
Media people are regularly contacted,
and most importantly, the music is
available on the radio for people to hear
prior to the concerts. There aren't many
small to intermediate markets that have
that luxury_
The new season bodes well for modern
jazz listeners. The first performance of
the winter season will be the first local
appearance of the Motor City's Griot Galaxy
since they opened for the Art Ensem·
ble of Chicago at the Michigan League
Ballroom in the mid '70s. It is also only
the second gathering of the Griots since
they knocked the crowd out this past sum~
mer at Montreux/Detroit. The show is
slated for the University Club on Jan.l4.
Townsend wants to do more with the
vast pool of Detroit talent. "We need to
start looking at Detroit bands, and see
which ones are doing new things." The
Griot Galaxy are certainly the best
choice in that respect, and may pave the
way for other Creative Artist Collective
members to perform here.
Also on Jan. 14, the Katalentc·Kwek Or·
chestra is scheduled for the Depot Town
Jazz Series in Ypsilanti, and baritone
saxophonist Hamiel Bluiett is slated to
play at the Detroit Institute of Arts. Can
all three diverse jazz programs pull in

ECLIPSE
CONTINUED FRO~ ]'bE: powerful Pope will travel
with his album mates. electric
substantial audiences? bassist Gerald Veasley and drum·
Toshlko Akiyoshi's pianJstics mer Cornell Rochester. Veasley
will be presented on Jan. 27. Aklyo· has perfonned and recorded with
shl, well known for her poll-win· James "Blood" Ulmer, while
ning writing and arranging, as well Rochester ts the rubber band of a
as leading her big band with bus- tub thumper heard in town with Jaband
Lew Tabackin, will front a maaladeen Tacuma. This show is
trio with Detroit drummer J.C. part of the Bright Moments series,
Heard and Toledo bassist Jeff Hal- dedicated to the late Rahsaan Rosey.
J.C. and Toshiko met in Tokyo land Kirk, and will take place at
on an old Jazz At The PhD harmon- the U Club on Feb. 11.
ic tour in 1954, and played exten- Another offering in the months
stvely together in the Land of the ahead will present quite a different
Rising Sun. Heard enjoyed It so approach. The instrumental string
much that he stayed in Japan for tradition in jazz, with its roots in
tour years. This will be their first Southern banjo and acoustic blues
stateside concert. music, has been taken into the
The Akiyoshi show is one Town· modern era by such innovators as
send finds particularly thrilling. Charlie Christian and Django Rein·
"Toshtko is really the woman in hardt tn the pre-Oop period, and
jazz in my mind," she said. "I feel John McLaughlin and Ralph
it's a special show. She's a woman Towner in the '60s anq '70s. But
of an older generation whom we these days the mandolin is becom·
haveneverdone." · ing an instrument that is getting
Shows will be at 9 p.m. and 11 more mileage in jazz, and David
p.m.,alsoattheUCiub. Grisman is the prime mover in
Tenor saxophonist Odean Pope bringing Its sound to the fore-front
from Philadelphia is also booked of new music.
for the first time in the Midwest. A Grisman has steadily built a loy·
fonner member of Max Roach's al following for his "dawg-grass"
recent quartet, Pope Is another up· music, which combines elements
and-coming young player and com· of bluegrass with swing a Ia the Hot
poser. He is at once swinging and Club of France or Duke Ellington
funky, bopping like there's no to- The Union Ballroom will stage this
morrow. H1s recent album, "AI· showcase for the renowned mandomost
Like Me," was the impetus linistonApri17,withsetsat8p.m.
forbringinghimintoAnnArbor. and 10:30 p.m. Grisman will also
conduct a workshop prior to the
performance at the Trotter House.
He has recorded many albums
lately, most recently with StephaneGrappelli.
Also in the works are two shows
at Hill Auditorium which Eclipse
hopes will help fund their experi·
ments with lesser-known artists.
You fans of so-called "pop jazz"
will hear more on tentatively
scheduled concerts by a "chic"
pianist and vibist with a string
quartet, and a spiraling, gyrating
fusion unit.
As they approach the end of their
first decade of programming, both
the departing Bram (headed for
Cleveland, a jazz desert) and the
arriving Townsend seem upbeat
about the uncertain future of jazz.
Ann Arbor's music scene, and the
pyramid they have helped to build.
"We're entering a middle
age ... a mature age," said Bram.
"I think that we're able to survive.
There has been an increase in fund·
ing, and I think it will skyrocket.
That will put us over the top. The
organization is in fine shape. We're
doing better than anyone else in
town."
"The idea or live music," as
Townsend pointed out "is that
you're there, and the history of the
musicians in that concert 1s hap·
pening at that particular performance.
That's why it's different
from every other concert!''