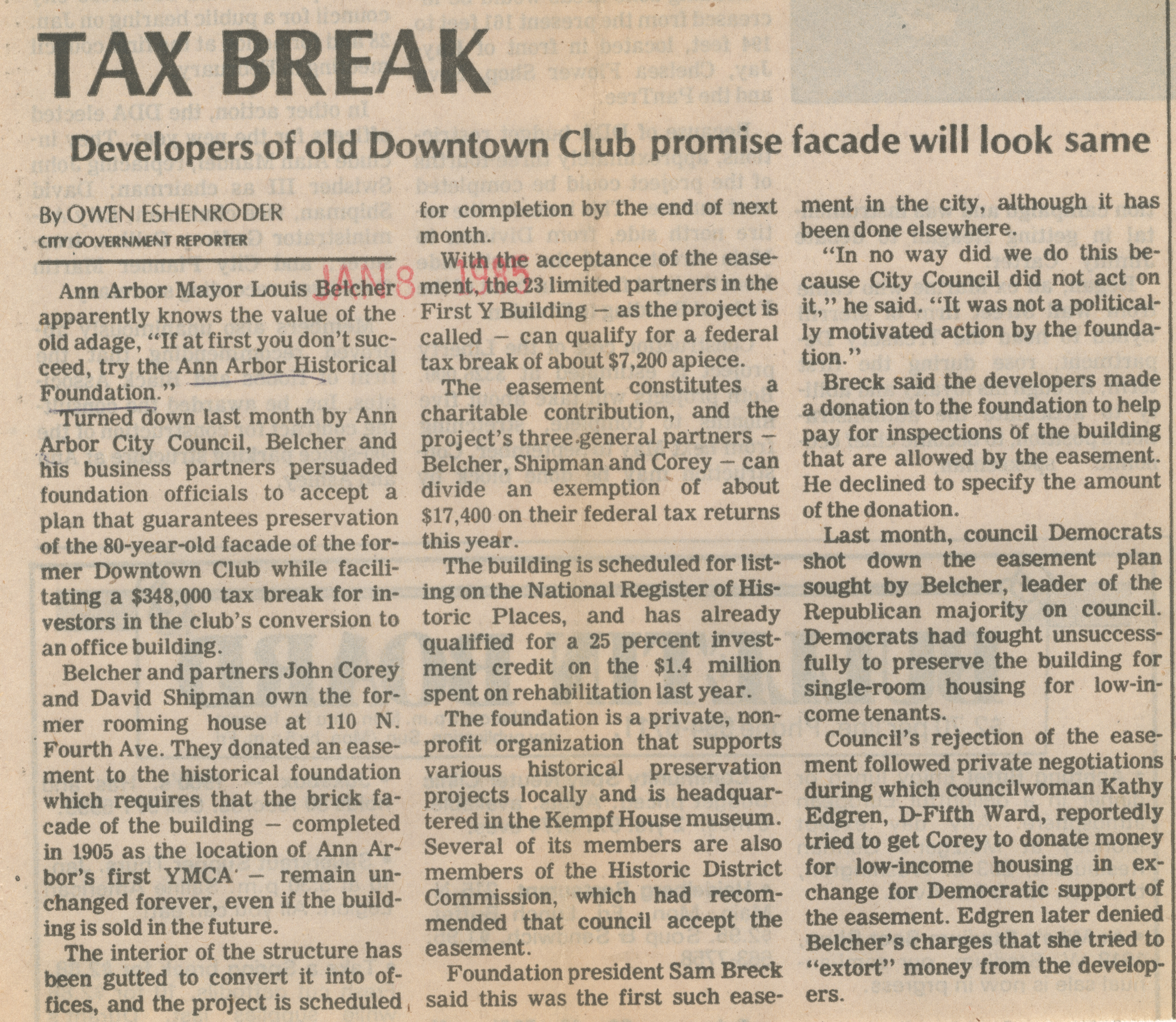 Turned down last month by Ann Arbor City Council, Belcher and his business partners persuaded foundation officials to accept a plan that guarantees preservation of the 80-year-old facade of the former Downtown Club while facilitating a $348,000 tax break for investors in the club’s conversion to an office building.

Belcher and partners John Corey and David Shipman own the former rooming house at 110 N. Fourth Ave. They donated an easement to the historical foundation which requires that the brick facade of the building - completed in 1905 as the location of Ann Arbor’s first YMCA - remain unchanged forever, even if the building is sold in the future.

The interior of the structure has been gutted to convert it into offices, and the project is scheduled for completion by the end of next month.

With the acceptance of the easement, the 23 limited partners in the First Y Building - as the project is called - can qualify for a federal tax break of about $7,200 apiece.

The easement constitutes a charitable contribution, and the project’s three general partners -Belcher, Shipman and Corey - can divide an exemption of about $17,400 on their federal tax returns this year.

The building is scheduled for listing on the National Register of Historic Places, and has already qualified for a 25 percent investment credit on the $1.4 million spent on rehabilitation last year.

The foundation is a private, nonprofit organization that supports various historical preservation projects locally and is headquartered in the Kempf House museum. Several of its members are also members of the Historic District Commission, which had recommended that council accept the easement.

Foundation president Sam Breck said this was the first such easement in the city, although it has been done elsewhere.

“In no way did we do this because City Council did not act on it,” he said. “It was not a politically motivated action by the foundation.”

Breck said the developers made a donation to the foundation to help pay for inspections of the building that are allowed by the easement. He declined to specify the amount of the donation.

Last month, council Democrats shot down the easement plan sought by Belcher, leader of the Republican majority on council. Democrats had fought unsuccessfully to preserve the building for single-room housing for low-income tenants.

Council’s rejection of the easement followed private negotiations during which councilwoman Kathy Edgren, D-Fifth Ward, reportedly tried to get Corey to donate money for low-income housing in exchange for Democratic support of the easement. Edgren later denied Belcher’s charges that she tried to “extort” money from the developers.