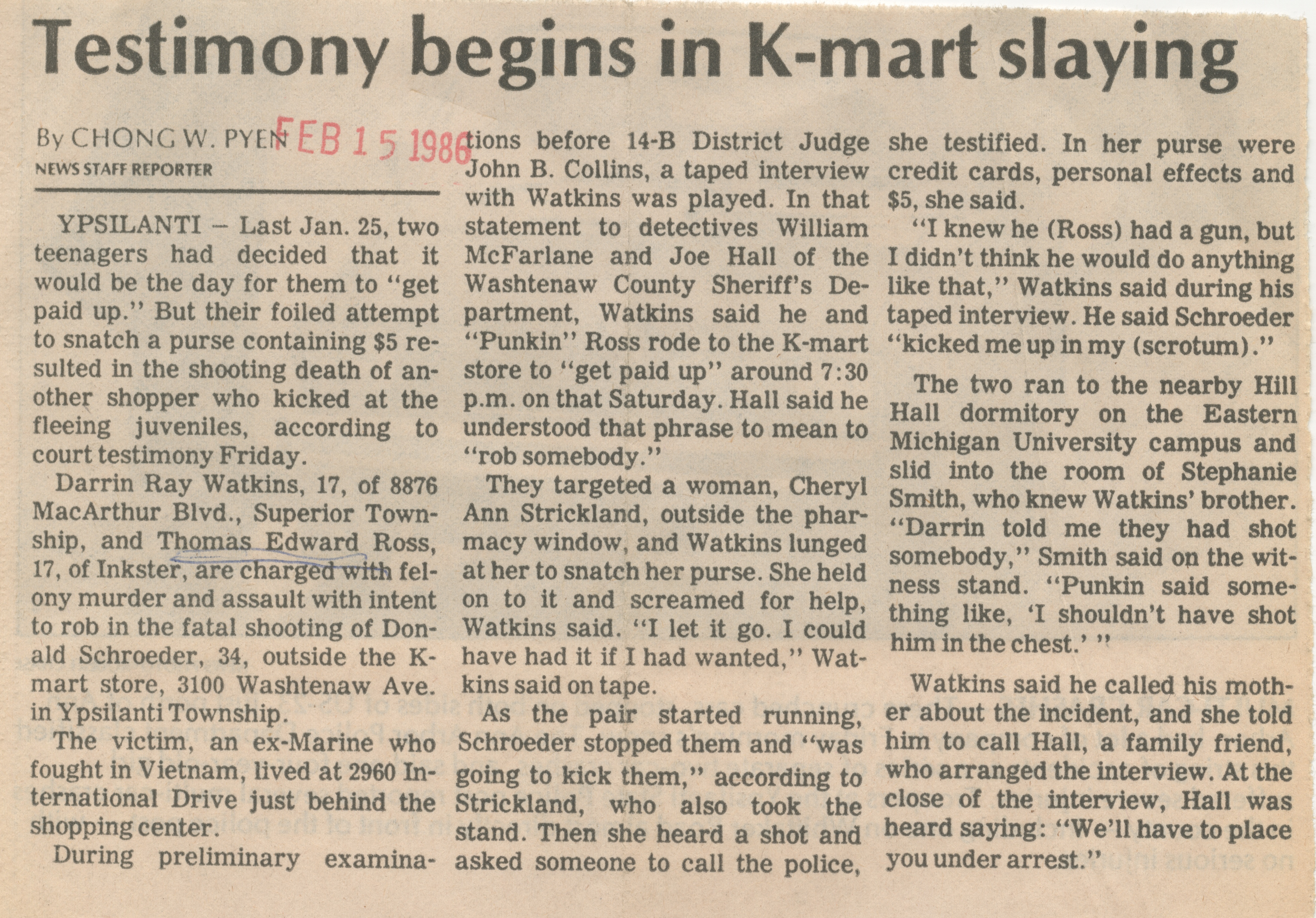 YPSILANTI - Last Jan. 25, two teenagers had decided that it would be the day for them to “get paid up.” But their foiled attempt to snatch a purse containing $5 resulted in the shooting death of another shopper who kicked at the fleeing juveniles, according to court testimony Friday.

Darrin Ray Watkins, 17, of 8876 Mac Arthur Blvd., Superior Township, and Thomas Edward Ross, 17, of Inkster, are charged with felony murder and assault with intent to rob in the fatal shooting of Donald Schroeder, 34, outside the K-mart store, 3100 Washtenaw Ave. in Ypsilanti Township.

The victim, an ex-Marine who fought in Vietnam, lived at 2960 International Drive just behind the shopping center.

During preliminary examinations before 14-B District Judge John B. Collins, a taped interview with Watkins was played. In that statement to detectives William McFarlane and Joe Hall of the Washtenaw County Sheriff’s Department, Watkins said he and “Punkin” Ross rode to the K-mart store to “get paid up” around 7:30 p.m. on that Saturday. Hall said he understood that phrase to mean to “rob somebody.”

They targeted a woman, Cheryl Ann Strickland, outside the pharmacy window, and Watkins lunged at her to snatch her purse. She held on to it and screamed for help, Watkins said. “I let it go. I could have had it if I had wanted,” Watkins said on tape.

As the pair started running, Schroeder stopped them and “was going to kick them,” according to Strickland, who also took the stand. Then she heard a shot and asked someone to call the police, she testified. In her purse were credit cards, personal effects and $5, she said.

“I knew he (Ross) had a gun, but I didn’t think he would do anything like that,” Watkins said during his taped interview. He said Schroeder “kicked me up in my (scrotum)

The two ran to the nearby Hill Hall dormitory on the Eastern Michigan University campus and slid into the room of Stephanie Smith, who knew Watkins’ brother. “Darrin told me they had shot somebody,” Smith said on the witness stand. “Punkin said something like, ‘I shouldn’t have shot him in the chest.’ ”

Watkins said he called his mother about the incident, and she told him to call Hall, a family friend, who arranged the interview. At the close of the interview, Hall was heard saying: “We’ll have to place you under arrest.”