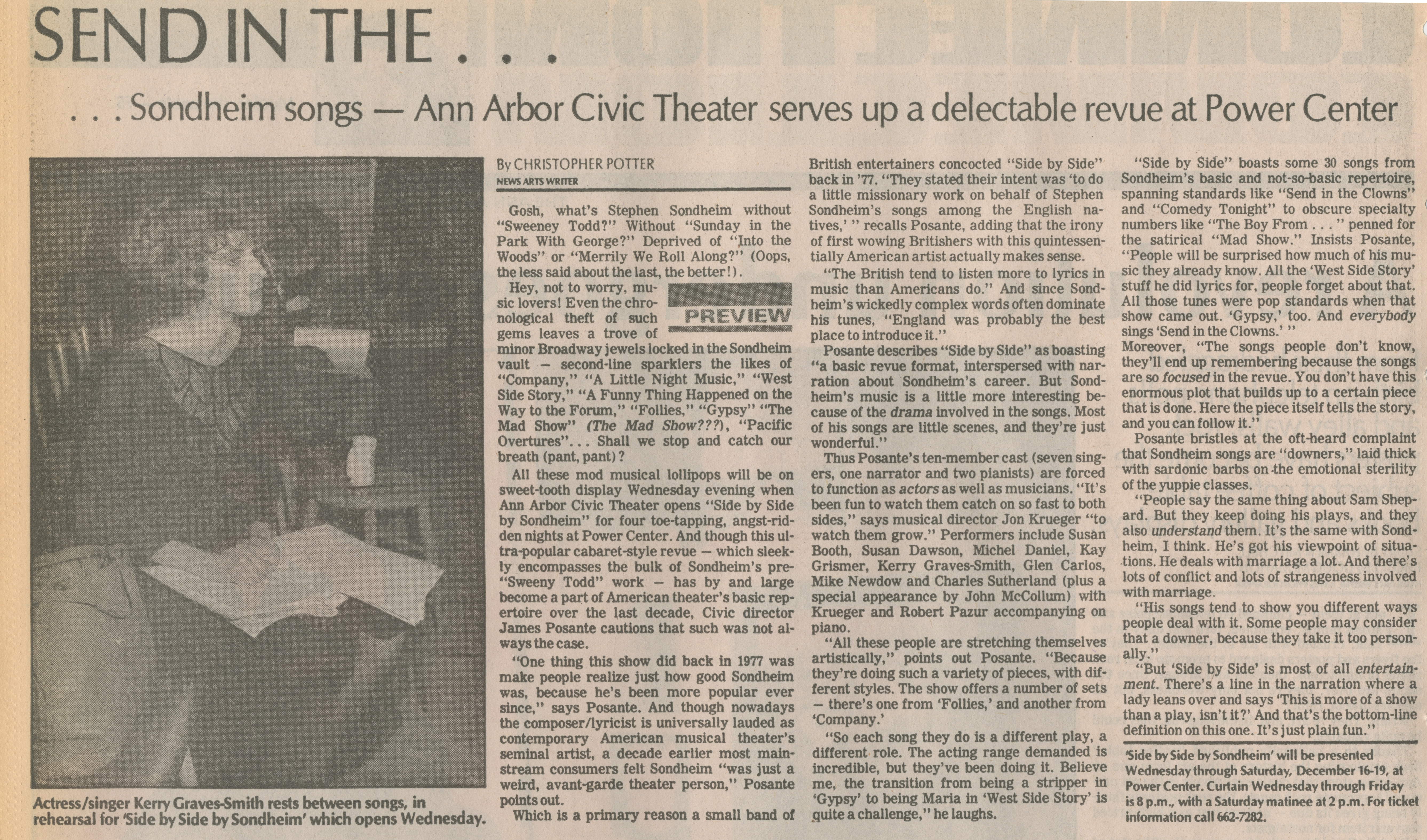 Actress/singer Kerry Graves-Smith rests between songs, in rehearsal for 'Side by Side by Sondheim' which opens Wednesday.

Gosh, what’s Stephen Sondheim without “Sweeney Todd?” Without “Sunday in the Park With George?” Deprived of “Into the Woods” or “Merrily We Roll Along?” (Oops, the less said about the last, the better!).

Hey, not to worry, music lovers! Even the chronological theft of such gems leaves a trove of minor Broadway jewels locked in the Sondheim vault - second-line sparklers the likes of “Company,” “A Little Night Music,” "West Side Story,” “A Funny Thing Happened on the Way to the Forum,” “Follies,” “Gypsy" "The Mad Show” (The Mad Show???), “Pacific Overtures”... Shall we stop and catch our breath (pant, pant) ?

All these mod musical lollipops will be on sweet-tooth display Wednesday evening when Ann Arbor Civic Theater opens “Side by Side by Sondheim” for four toe-tapping, angst-ridden nights at Power Center. And though this ultra-popular cabaret-style revue — which sleekly encompasses the bulk of Sondheim’s pre-“Sweeny Todd" work - has by and large become a part of American theater’s basic repertoire over the last decade, Civic director James Posante cautions that such was not always the case.

“One thing this show did back in 1977 was make people realize just how good Sondheim was, because he’s been more popular ever since,” says Posante. And though nowadays the composer/lyricist is universally lauded as contemporary American musical theater’s seminal artist, a decade earlier most mainstream consumers felt Sondheim “was just a weird, avant-garde theater person," Posante points out.

Which is a primary reason a small band of
British entertainers concocted “Side by Side” back in ’77. “They stated their intent was ‘to do a little missionary work on behalf of Stephen Sondheim’s songs among the English natives,’ ” recalls Posante, adding that the irony of first wowing Britishers with this quintessentially American artist actually makes sense.

“The British tend to listen more to lyrics in music than Americans do.” And since Sondheim’s wickedly complex words often dominate his tunes, “England was probably the best place to introduce it.”

Posante describes “Side by Side” as boasting “a basic revue format, interspersed with narration about Sondheim’s career. But Sondheim’s music is a little more interesting because of the drama involved in the songs. Most of his songs are little scenes, and they’re just wonderful."

Thus Posante’s ten-member cast (seven singers, one narrator and two pianists) are forced to function as actors as well as musicians. “It’s been fun to watch them catch on so fast to both sides,” says musical director Jon Krueger “to watch them grow.” Performers include Susan Booth, Susan Dawson, Michel Daniel, Kay Grismer, Kerry Graves-Smith, Glen Carlos, Mike Newdow and Charles Sutherland (plus a special appearance by John McCollum) with Krueger and Robert Pazur accompanying on piano.

“All these people are stretching themselves artistically,” points out Posante. “Because they’re doing such a variety of pieces, with different styles. The show offers a number of sets - there’s one from ‘Follies,’ and another from ‘Company.’

“So each song they do is a different play, a different role. The acting range demanded is incredible, but they’ve been doing it. Believe me, the transition from being a stripper in ‘Gypsy’ to being Maria in ‘West Side Story’ is .quite a challenge,” he laughs.

“Side by Side” boasts some 30 songs from Sondheim’s basic and not-so-basic repertoire, spanning standards like “Send in the Clowns” and "Comedy Tonight” to obscure specialty numbers like “The Boy From ...” penned for the satirical “Mad Show.” Insists Posante, “People will be surprised how much of his music they already know. All the ‘West Side Story’ stuff he did lyrics for, people forget about that. All those tunes were pop standards when that show came out. ‘Gypsy,’ too. And everybody sings ‘Send in the Clowns.’ ”

Moreover, “The songs people don’t know, they’ll end up remembering because the songs are so focused in the revue. You don’t have this enormous plot that builds up to a certain piece that is done. Here the piece itself tells the story, and you can follow it.”

Posante bristles at the oft-heard complaint that Sondheim songs are “downers,” laid thick with sardonic barbs on-the emotional sterility of the yuppie classes.

“People say the same thing about Sam Shepard. But they keep doing his plays, and they also understand them. It’s the same with Sondheim, I think. He’s got his viewpoint of situations. He deals with marriage a lot. And there’s lots of conflict and lots of strangeness involved with marriage.

“His songs tend to show you different ways people deal with it. Some people may consider that a downer, because they take it too personally.”

“But ‘Side by Side’ is most of all entertainment. There’s a line in the narration where a lady leans over and says ‘This is more of a show than a play, isn’t it?’ And that’s the bottom-line definition on this one. It’s just plain fun. ”

'Side by Side by Sondheim' will be presented Wednesday through Saturday, December 16-19, at Power Center. Curtain Wednesday through Friday is 8 p.m., with a Saturday matinee at 2 p.m. For ticket information call 662-7282.