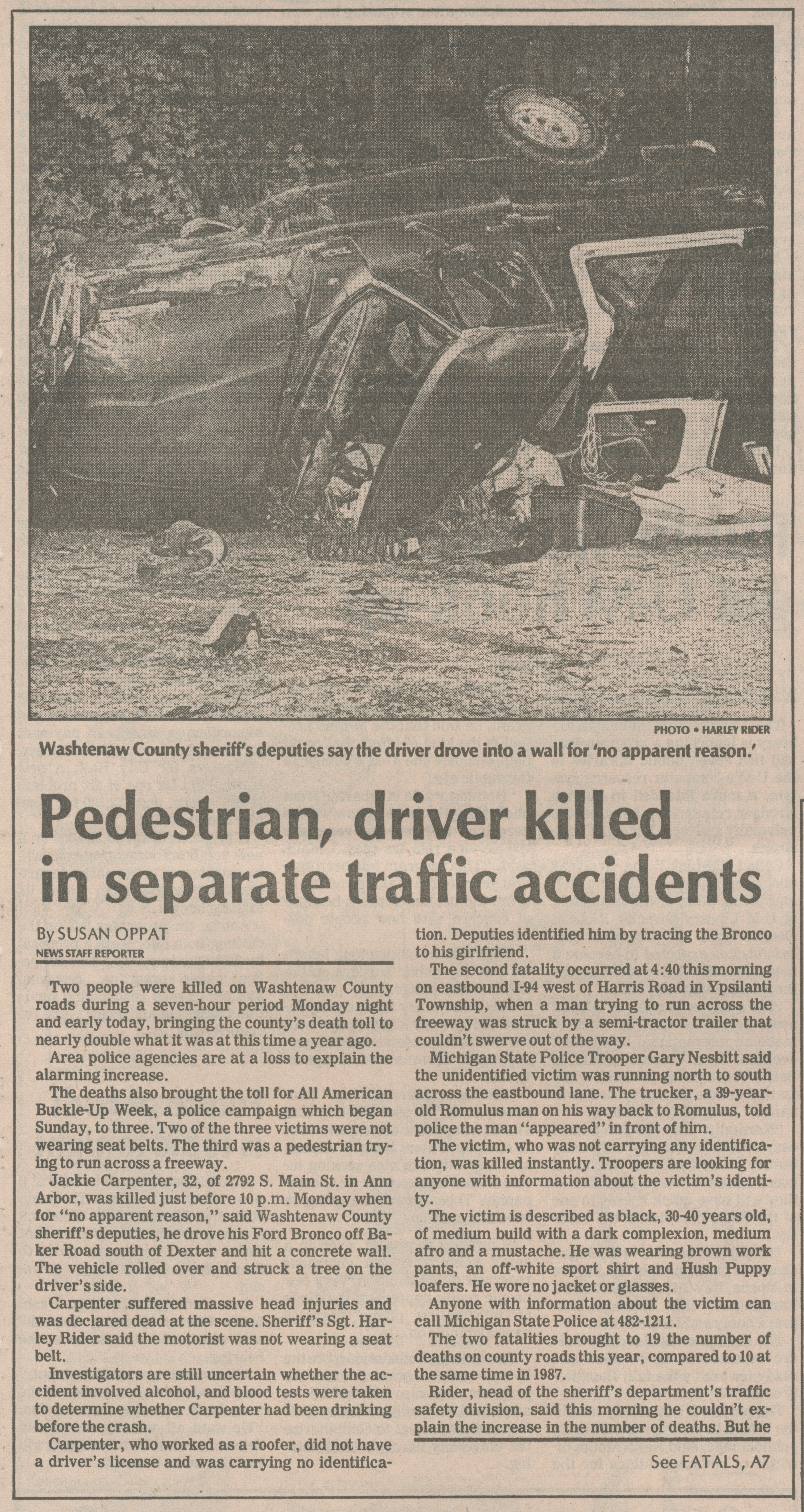 Two people were killed on Washtenaw County roads during a seven-hour period Monday night and early today, bringing the county's death toll to nearly double what it was at this time a year ago
Area police agencies are at a loss to explain the alarming increase.
The deaths also brought the toll for All American Buckle-Up Week, a police campaign which began Sunday, to three. Two of the three victims were not wearing seat belts. The third was a pedestrian trying to run across a freeway.
Jackie Carpenter, 32, of 2792 S. Main St. in Ann Arbor, was killed just before 10 p.m. Monday when for "no apparent reason," said Washtenaw County sheriff's deputies, he drove his Ford Bronco off Baker Road south of Dexter and hit a concrete wall. The vehicle rolled over and struck a tree on the driver's side.
Carpenter suffered massive head injuries and was declared dead at the scene. Sheriff's Sgt. Harley Rider said the motorist was not wearing a seat belt.
Investigators are still uncertain whether the accident involved alcohol, and blood tests were taken to determine whether Carpenter had been drinking before the crash.
Carpenter, who worked as a roofer, did not have a driver's license and was carrying no identification. Deputies identified him by tracing the Bronco to his girlfriend.
The second fatality occurred at 4:40 this morning on eastbound I-94 west of Harris Road in Ypsilanti Township, when a man trying to run across the freeway was struck by a semi-tractor trailer that couldn't swerve out of the way.
Michigan State Police Trooper Gary Nesbitt said the unidentified victim was running north to south across the eastbound lane. The trucker, a 39-year old Romulus man on his way back to Romulus, told police the man "appeared in front of him.
The victim, who was not carrying any identification, was killed instantly. Troopers are looking for anyone with information about the victim's identity.
The victim is described as black, 30-40 years old, of medium build with a dark complexion, medium afro and a mustache. He was wearing brown work pants, an off-white sport shirt and Hush Puppy loafers. He wore no jacket or glasses.
Anyone with information about the victim can call Michigan State Police at 482-1211.
The two fatalities brought to 19 the number of deaths on county roads this year, compared to 10 at the same time in 1987.
Rider, head of the sheriff's department's traffic safety division, said this morning he couldn't explain the increase in the number of deaths. But he pointed out that no one wearing a seat belt has died in the county this year. Of the 19 deaths, 13 motorists were not wearing seat belts. The other six were pedestrians or cyclists.
Police across the county are concentrating on seat belt violations this week. Sheriff's deputies will put special attention into issuing tickets to violators on Thursday to increase awareness of the state law requiring seat belt use.