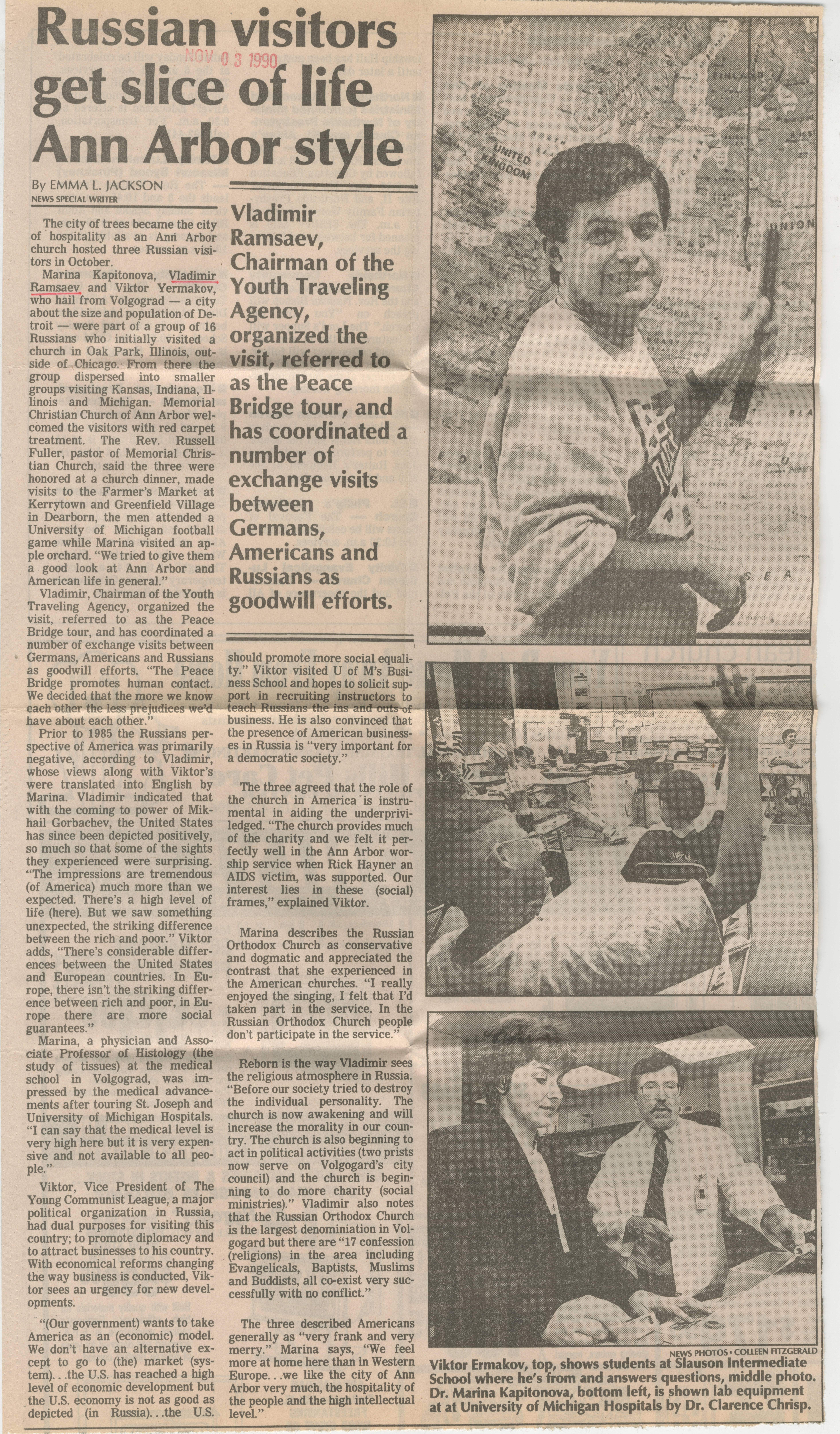 Vladimir Ramsaev, Chairman of the Youth Traveling Agency, organized the visit, referred to as the Peace Bridge tour, and has coordinated a number of exchange visits between Germans, Americans and Russians as goodwill efforts.

The city of trees became the city of hospitality as an Anri Arbor church hosted three Russian visitors in October.

Marina Kapitonova, Vladimir Ramsaev and Viktor Yermakov, who hail from Volgograd — a city about the size and population of Detroit — were part of a group of 16 Russians who initially visited a church in Oak Park, Illinois, outside of Chicago. From there the group dispersed into smaller groups visiting Kansas, Indiana, Illinois and Michigan. Memorial Christian Church of Ann Arbor welcomed the visitors with red carpet treatment. The Rev. Russell Fuller, pastor of Memorial Christian Church, said the three were honored at a church dinner, made visits to the Farmer’s Market at Kerrytown and Greenfield Village in Dearborn, the men attended a University of Michigan football game while Marina visited an apple orchard. “We tried to give them a good look at Ann Arbor and American life in general.”

Vladimir, Chairman of the Youth Traveling Agency, organized the visit, referred to as the Peace Bridge tour, and has coordinated a number of exchange visits between Germans, Americans and Russians as goodwill efforts. “The Peace Bridge promotes human contact. We decided that the more we know each other the less prejudices we'd have about each other.”

Prior to 1985 the Russians perspective of America was primarily negative, according to Vladimir, whose views along with Viktor’s were translated into English by Marina. Vladimir indicated that with the coming to power of Mikhail Gorbachev, the United States has since been depicted positively, so much so that some of the sights they experienced were surprising. “The impressions are tremendous (of America) much more than we expected. There’s a high level of life (here). But we saw something unexpected, the striking difference between the rich and poor.” Viktor adds, “There’s considerable differences between the United States and European countries. In Europe, there isn’t the striking difference between rich and poor, in Europe there are more social guarantees.”

Marina, a physician and Associate Professor of Histology (the study of tissues) at the medical school in Volgograd, was impressed by the medical advancements after touring St. Joseph and University of Michigan Hospitals. “I can say that the medical level is very high here but it is very expensive and not available to all people.”

Viktor, Vice President of The Young Communist League, a major political organization in Russia, had dual purposes for visiting this country; to promote diplomacy and to attract businesses to his country. With economical reforms changing the way business is conducted, Viktor sees an urgency for new developments.

“(Our government) wants to take America as an (economic) model. We don’t have an alternative except to go to (the) market (system). . .the U.S. has reached a high level of economic development but the U.S. economy is not as good as depicted (in Russia).. .the U.S.
should promote more social equality.” Viktor visited U of M’s Business School and hopes to solicit support in recruiting instructors to teach Russians the ins and outs of business. He is also convinced that the presence of American businesses in Russia is “very important for a democratic society.”

The three agreed that the role of the church in America is instrumental in aiding the underpriviledged. “The church provides much of the charity and we felt it perfectly well in the Ann Arbor worship service when Rick Hayner an AIDS victim, was supported. Our interest lies in these (social) frames,” explained Viktor.

Reborn is the way Vladimir sees the religious atmosphere in Russia. “Before our society tried to destroy the individual personality. The church is now awakening and will increase the morality in our country. The church is also beginning to act in political activities (two prists now serve on Volgogard’s city council) and the church is beginning to do more charity (social ministries).” Vladimir also notes that the Russian Orthodox Church is the largest denominiation in Vol-gogard but there are “17 confession (religions) in the area including Evangelicals, Baptists, Muslims and Buddists, all co-exist very successfully with no conflict.”

The three described Americans generally as “very frank and very merry.” Marina says, “We feel more at home here than in Western Europe.. .we like the city of Ann Arbor very much, the hospitality of the people and the high intellectual level.”